This past weekend I had the rough task of being a helpless observer. 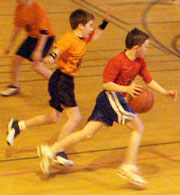 I’ll start with my son’s basketball game. You’d have to know my son to understand "effort." He got an award last year called something like "Most Likely to Run Through a Wall To Win." On the field, or court, he never gives up. I admire his intensity, and hope that someday he’ll find the sport he loves, so he can channel all that energy into something specific.

Last weekend’s basketball game was a clear case of a team with a plan vs. a group of kids playing together. In other words… my son’s team got beaten pretty badly. It was heartbreaking to watch, especially because it was obvious how hard they were all trying. The other team wasn’t much bigger…or much faster…and they didn’t have some fantastic skill that should have allowed them to dominate as they did. Their edge came simply from coaching. They had plays, they worked together setting picks, and they had a set defense that always had a couple of boys under the basket grabbing rebounds. My son’s team ran, and ran, and ran, but simply couldn’t overcome the teamwork and disciplined play shown by the other team.

The thing that made it even more frustrating was that our coach didn’t even show up. He sent his sons to fill in. What made it worse was, this was the last game of the season.

I totally understand volunteer coaches, and appreciate what they do, but I don’t understand not living up to your commitments. This is one of the reasons I find myself backing down from volunteering. I simply don’t know where I’m going to be on any given week. I’ve always felt that inconsistent help is worse than poor coaching. At least SOME coaching is better than nothing — SOME planning is better than nothing. 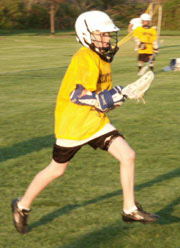 After the basketball game, we went to the lacrosse field to watch several games. Lacrosse is a big sport where I live. These kids are COACHED. They understand the nature of the game, and it was fun to watch (for the next 3 hours, and 3 games). It’s so clear to see the difference it makes when a coach has been involved, when a coach has provided structure, and when a coach has demanded adherence to the structure from the athletes. They didn’t win all the games (2-1), but they played well in every one of them, and respect was given to the other coach, who also prepared his team for the 3rd game.

From the lacrosse games, I went to a swim meet…just to watch. I saw some great swimmers, and some aspiring swimmers. What amazed me was the inconsistency that many individual swimmers showed from race to race, and from prelims to finals in THE SAME RACE. I noticed HUGE differences in splits from morning swims to finals. I also saw huge differences in how a race was swum in finals. While I’d like to say this shows that the swimmer is testing and experimenting, I’m not sure I’d recommend an experiment that called for this much variance. I’ll take one race as an example. The difference in a 50 split between prelims and finals was .7 tenths of a second — finals was .7 tenths slower, and the race was a 100.

What this showed me was simple. This swimmer hadn’t been allowed to practice enough AT HIGH SPEED. This swimmer was still searching for how to go fast simply because there was not enough preparation put into this aspect of training. What I mean is that most of the time spent in the pool for the past couple weeks was about "how much," not "how" or "how fast." At this point in the season (this was the last meet of the season), there is very little that can be done from a physical-fitness standpoint. During taper, the focus needs to shift to race-specific training. If the swimmer is preparing for a 100, then 25s, 12-1/2s, starts, and turns should be practiced, and this should be done with the same yardage that you would expect to get in a meet warm-up. 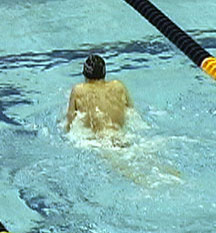 If you plan to do a meet warm-up of 1500 to 2000 yards, and then get up on the blocks and RACE, you should rehearse that pattern in the last week or so of taper. I’ve seen coaches throw 4-5,000 yards at swimmers the week prior to a championship meet, usually with sprints done near the END of practice, then expect them to swim fast at a meet after just a 1,500-yard warm-up. Talk about unprepared! And, in practice, how can they rehearse swimming at TRUE MAXIMUM SPEED after swimming 4,000 yards?

It was mostly a frustrating weekend of observing, and the point of this article is to tell ALL athletes, especially swimmers, to NEVER go into a race without a plan. I know I’ve said this before, but I guess it needs to be reinforced. As you get older and set forth into the "real world — (not the MTV show, but the REAL world), you’ll realize that when you work without a plan or goal, you’ll end up looking for new jobs frequently. Why approach a race so haphazardly. The purpose of training is to prepare athletes to COMPETE…not to train better. What I saw this past weekend were fit athletes who knew how to train, and who showed tremendous effort — yet didn’t know how to compete. As an athlete, you need to understand that it’s up to you to develop your plan. If you’re in a team sport, then you’d better look at another website and learn that sport (I can’t hit the broad side of a barn in basketball). If you’re a swimmer, then you’d better start thinking about how you’re going to swim your next race, and make sure you put some time into preparing for THAT race.