Finally… I’m done traveling for a month. At times I thought it was not going to end, but what an ending it was.

My last trip, which was to see Dave for more filming, started out great at the Hertz counter, where they very nicely upgraded me to a convertible. Dave and I were cruisin’ in style back and forth to the pool, and even took a trip along the Pacific Coast Highway. What a pair we made — me with my hair EVERYWHERE, and Dave with…uh…no hair at all. I’m sure nobody knew we had a rental; they could probably tell from my tan.

Visiting the Irvine Novaquatics is always a great experience. The training is always interesting, and always very tough. I feel that there are a lot of people who have a hard time understanding the type of training that Coach Dave Salo does, but I also understand that most people don’t work with this level of athlete. 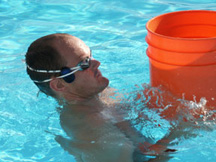 Looking around the pool, I saw Olympians Lenny Krazelberg (I met him…thanks, Dave), Jason Lezak, Scott Tucker, and Staciana Stitts, as well as many other GREAT athletes. Swimmers at this level understand the instructions given to them, and need little else. They are motivated, and give their attention to detail. BUT…when they don’t, Dave Salo is there, ready to pounce! He demands focus, and challenges them much more than people think from a physical perspective. The yardage probably wouldn’t measure up to the scrutiny of many coaches, but I really don’t think anybody in this program gives a HOOT about what anybody else thinks. They train hard, and have a good crew of people, who seem to really be enjoying the sport.

I spent a lot of time filming at Soka University. I had a fun young-against-old-breaststroker grudge match with Dave in racquetball. And to finish the trip, I hooked up with an old friend and competitor, John Moffet. This guy is one of the greatest breaststrokers to ever live. He still holds the National Age-Group Record in many events, but the one I’m most impressed with is his 13-14 200 breaststroke of 2:03. I just learned that his 15-16 sub-2:00 200 breaststroke record was broken last week. 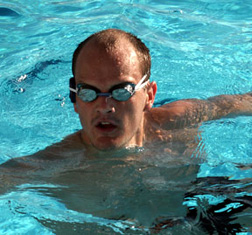 The crazy thing is, with all the racing we did, for many National Team spots, we remembered rooming together on a few of those trips. We talked about our trip to China, and the experiences we had as young swimmers to see the world. We remembered that when we were two of the youngest swimmers at Senior Nationals, my parents took me to visit with his parents at his house in Newport Beach, California. We had started competing against each other in 1978, and continued through 1984 when I retired, and he continued. We remained friends through all our victories and defeats.

John now lives in Los Angeles with his wife, Susan, and their two children. John is now a television producer who has done many shows for Discovery Channel, ESPN, and others. He currently is producing Forever Eden, a reality show for Fox Television. I’m gonna watch it just to see his name.

The bonus of the week was that Dave introduced me to one of his friends, and we convinced this swimmer to take part in one of our upcoming videos. I was PSYCHED and I’m already working on it. Thanks again, Dave… YOU DA MAN. Oh yeah, during the week, Dave’s alma mater — Auburn — seriously crushed everyone in winning Men’s NCAA Championships. They had already won the Women’s Championship a couple weeks earlier. Congratulations to Auburn Head Coach David Marsh and his great staff and awesome team…nice sweep! Just don’t make me say "War Eagle."