For the past few weeks, I’ve been flying all over the country, filming many incredible athletes for upcoming projects. Last weekend, I ended up at Stanford University. In many ways, Stanford has one of the best reputations in the world of swimming. Their basketball team is OK, too.

One of the side benefits of going to all these swimming venues is that I get to see old friends. A couple weeks ago I was in the Southwest, and ended up at a friend’s house with his wife and EIGHT children. My friend is now a swim coach. It’s amazing to see how we’ve changed, yet how we’re exactly the same as when we trained together…in the same lane…for six years on and off.

At Stanford, I saw Skip Kenney. Of course, whenever I see Skip, I have mixed emotions. There is the excitement of seeing a good friend, but at the same time I remember the pain he put me through as my coach. The memories are both good and bad, but they’re incredibly powerful…and it’s hard to look at him now without smiling. It’s great to see all that he has accomplished since the short time we spent together. He has truly created a lasting legacy in our sport. How cool it was just to be there.

When I arrived at the Stanford pool complex, Richard Quick was coaching the females. I had an hour or so before it was my time to film, so I took a seat in stands – up in the balcony so I would be out of their way – and watched their practice. At one point, Richard walked along the side of the pool, looked up and said, “How are you today, Glenn?” Sure, it seems silly to be picking this out, but Richard and the women are at NCAA Championships this week. I was really flattered that he even took the time to notice, and to say hello.

There is a certain level of respect that is gained when you spend enough time in one profession. It’s not just about spending time, however, but about spending time WELL. Swimming is so much a people-oriented activity, and the people at Stanford understand this. My friend Greg in Arizona (yeah, I just gave away another clue), understands this. We all seem to respect each other, enough to say hello, and to show an extreme level of courtesy.

This is really the gist of this article. Respect for your peers…and letting yourself appreciate the friendships that you are building every time you go to the pool. Lifelong friendships are just one of the many side benefits of our sport. I’ve been asked many times about the “sacrifice” that athletes make. I never realized any sacrifice, simply because I was around people who shared everything with me. I was around my friends, and we went through the quest together. When you really get down to it, the friends that I’ve made through swimming are much more than friends. They are life buddies…respected peers…unconditional friends. We shared pain and victory and defeat. We spent HOURS together in the water, searching for the same things. We learned to know and respect each other. When I see them now, no matter how long it’s been since we last met, the respect and the friendship are still there.

It’s easy to become so wrapped up in how far, how fast, what place, and what time that we forget it’s the PROCESS that counts. Speed and success are all very important, but it’s how you GET to those things that will earn you the most respect…and that will bring you the most memories. We spend 99% of our time in preparation and about 1% of our time in actual racing. It’s in the preparation that we learn the lessons of dedication, commitment, loyalty, perseverance, and friendship. Even the lessons that we THINK are learned only in competition – things like desire, aggressiveness, sportsmanship, and fair play – are merely honed there. It’s in the preparation that they are born.

When reaching your potential requires SO much commitment, you can’t HELP but learn traits that will garner you respect, and great friends for a lifetime. Mediocrity is not something to be strived for, but the pursuit of greatness, whatever greatness is for you, is to be respected, and can be carried for a lifetime.

I received an email today from another old friend – someone whom I beat in 1980 Olympic Trials…but who then beat me in ’84 Trials. He wants me to stay at his house when I head west again next week… hmmmm… wasn’t this supposed to be my arch enemy? That never happened. I know how hard he worked to beat me…gotta respect that! 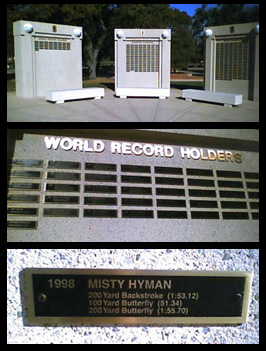 I send a Big Thanks to everyone at Stanford — to my hosts, Jason and Heidi; to Tim for making me swim in the mornings; to Jody for giving us so much water time; to Richard for saying hello; to Ted for allowing me to watch the Men’s team train; and even to my pal Skip, for not yelling at me too bad when the polo team changed the lane lines. Not that it was my fault, but I happened to be in proximity when it happened and he was just used to yelling at me.
Want to see how seriously they take their swimming at Stanford? The monuments that stand outside of the pool are lined up in the following order:

Imagine how cool it would be to have ONE World Record Holder go through your program… now look at THIS board!!!
For the “really” great swimmers like Misty Hyman, they even have to bundle up multiple NCAA Championships per year. Imagine how many they’d have if each Championship got it’s own plaque?