Last week I traveled to Indianapolis, Indiana, for the USMS SCY National Championships. In talking this week with my friends and family and the swimmers I coach, the question is always, "How were Nationals?" They’re asking how I did, of course. And the easy answer is that I had a good meet, winning my age group in the 50, 100, and 200 breast, and placing in the top six in the 100, 200, and 400 IMs. But the longer answer to "How were Nationals?" is that it was one of the most inspiring and affirming athletic events I’ve experienced as a swimmer. So, what ARE Nationals like? What makes them such a great event…and what made this one particularly memorable?

USMS stages this event every spring. The venue changes each year, and this year it happened to be at the famed IUPUI pool. That stands for Indiana University Purdue University at Indianapolis. The facility is amazing: two 50-meter indoor pools plus an 8-lane, 25-yard diving well over which soars the 10-meter diving tower. They use a bulkhead to divide the main pool into two, 25-yard competition pools, kept at a bracing 79 degrees. The other pool and the diving well are kept at a blissful 83 degrees or so, and are available for continuous warmup/warmdown. 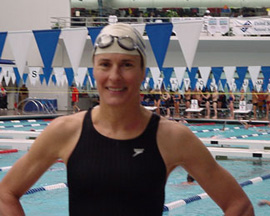 The main pool is arguable the fastest pool in the world, and is the baby of James (Doc) Counsilman, who coached at IU for decades and who passed away in January. The place oozes history and drama, and you can feel it the moment you step through the doors. IUPUI has been home to eleven US Olympic Trials, sixteen NCAA Championships (Glenn won NCAAs here), and three US Open Championships. Ten world records have been set here, as well as 89 American records.

From the photos and handprints-in-cement of Olympic Greats in the lobby (kind of a Grumman’s Walk of aquatic stars), to the nearly life-size photo banners of US standouts such as Dara Torres, Gary Hall, Jr., Summer Sanders, Janet Evans, and Lenny Krayzelburg that hang from rafters, to the wall emblazoned with the names of every member of the US Olympic Swimming/Diving/Synchro Teams from the last 20 years, the place is a shrine to fast swimming. In an atmosphere like this, it’s hard not to be inspired to higher levels of performance. And the thing is — if you look at those names on the Wall of Olympians, and then look at the day’s heat sheet, you’ll do a double take. Yep. If you pay close attention, the person next to you on the blocks, or tapping on your toes in the warmup pool, just might be an Olympian. It might be Roque Santos…or Kim Rhodenbaugh…or Rowdy Gaines…or Gary Hall, Jr. — just a few of the Masters All-Stars who were at this meet attempting to set everything from American to world records in their events. (There were 74 individual and 5 relay record-breaking swims over the weekend.)

OK. So now fill the place with 1564 toned and tapered Masters swimmers from every corner of the country, their buff bodies squeezed into the latest round of high-tech swimsuits from TYR, Speedo, H2O, Arena, you name it. Most of the athletes have met fairly rigorous time standards to get here, but Masters swimming is egalitarian in that any USMS swimmer can enter up to three events at Nationals without having met the time standards. To swim more than 3 events, you have to make the cuts.

The atmosphere in the pool, bleachers, and locker room is as much like a high school or family reunion as a national competition. You feel immediately connected to all of the other athletes, because you know just what they went through to get here. This is a place where new friendships are quick to form and wonderful to renew. But make no mistake…the competition among all these fast-friends and athletes is fierce. People are striving — Big Time — for world age-group records, national records, national championships, and personal bests. This is a finals-only meet, which means you get just one shot at each event, so the pressure is on each time you step up to the blocks. To heighten the drama, each event is seeded according to pre-submitted times, so you swim in heats with others in the same gender and five-year age bracket. The heats go by incredibly fast, but nearly every other heat is a race for a national championship. It makes for a very intense day of swimming and spectating. Every time the starting horn goes off, eight more swimmers are putting it on the line…for all it’s worth.

For me, the most exciting and fascinating and inspiring aspect of Masters Nationals was witnessing all this "putting it on the line." It’s one thing to train every day to stay fit and healthy, but it’s another thing entirely to take that training and to test it against that of your peers. And to test yourself against yourself — to see how well you can conquer all those doubts and demons and how skillfully you can harness your strengths so that they pull you toward your goals. It’s no small act of courage to step up to the blocks at ANY age. So I found myself getting teary-eyed as I watched Woody Bowersock, age 90, toe the line against four other ripped guys, age 85, in the 100 IM and set a national record in the process (his fourth of the meet). I felt inspired to keep practicing after I saw Petey Smith, age 79 and one of my teammates on New England Masters, absolutely SMOKE the field in the women’s 50 free with an awesome flip turn and a time of 35.99. I watched five heats of 50- to 69-year old men duke it out in the 200 fly, possibly the toughest event ever schemed up by the sport’s founding fathers. And I witnessed 49 heats of guys go against each other in the 50 free. Which brings me to another great part of the meet.

I mentioned that many former Olympians were at the meet, fulfilling what seems like a primal instinct to put it on the line and simply RACE. But there were some Olympic HOPEFULS at Indy, too, and their presence elevated the meet’s excitement level way beyond the red zone. I’m talking about The Race Club, a loose alliance of some of the world’s fastest sprinters. They live all over the globe, but often train together in Islamorada, Florida. Several members of The Race Club, including 8-time Olympic medalist Gary Hall, Jr., Aaron Ciarla, Sabir Muhammad, David Carter, and Nadine Rolland, took a break from their Olympic Trials training and came to Indy to compete in Masters Nationals. Each time they swam they stopped the show. I mean, when their heats were on the blocks (and the Race Club men were usually right next to each other in one heat) NO ONE was in the warmup pools or out grabbing lunch. Everyone was lined four deep on the deck and in the bleachers, craning to see these guys RACE. At the elite level, in the 50 or 100 free, arms and bodies are flying so fast that it’s hard to discern technique. No, we weren’t lined up to study technique. We were lined up to watch these guys put it on the line against each other. The crowd didn’t really seem to have a favorite. It really didn’t matter who won. The fascination was for the RACE…for the match-up of awesome talent against awesome talent. It was all about the race. About SPEED. About who could make their body go the fastest on this particular day and at this particular moment. And who better to appreciate this than 1500 swimmers who were doing the same thing themselves?

The Race Club match-ups were inspiring to watch. (And, incidentally, 28-year-old Sabir Muhammad won the 50 Free in 19.44 and the 100 Free in 42.91, two new national records.) But so were the match-ups between Woody Bowersock and his octogenarian cronies, between Joel Feldman and Laura Val (two of my contemporaries who thankfully didn’t swim breaststroke at this meet), between so many fast-friend rivals who all trained hard and put it to the test in Indy. If you’re reading this and you’re a Masters swimmer who has never competed, I urge you to give it a try. Don’t miss out on the chance to test yourself, to make great friends, and to be inspired to a lifetime of fitness. There’s a place for everyone on the blocks, from Gary Hall, Jr., to Woody Bowersock. Guys, you’ve got to try this. Go put it on the line!