An article appeared in the Washington Times online edition this week titled "U.S. Athletes Told To Cool It at Olympics." This article talked about how the USOC is instructing its athletes NOT to celebrate any victories with the show of waving the flag. As an American, and a US Olympian, I was initially offended that we’re NOT allowed to show our love of our country and the pride that we have. But then the importance of this issue began to settle in. 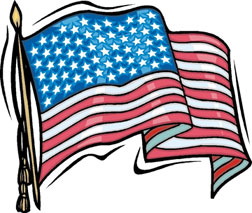 I had a conversation a few years ago with a friend who was visiting from Australia. She said she didn’t understand why the Americans were so conceited about their country. I told her I felt we lived in the BEST country in the world. She continued that THAT was the attitude she was talking about. She informed me that other people don’t feel the same way about their countries, and that when we say things like that, it strikes others as offensive. At first, I was defensive, but then felt bad for other countries that DIDN’T have this sense of country. I guess I just didn’t understand it, but it did give me important insight as to how others, even our friends, see us.

I’ve got tremendous national pride. I love America and am not ashamed to admit it. I DO feel that this is the greatest country on earth, for many reasons. If that sounds conceited, then I apologize, because it’s not meant as a put down to other places. It’s just that this is my home and I’m very proud of it. I don’t think America is the greatest because we have more or better stuff, or places. I’ve been on every continent in my travels (except the Arctics), and I’ve seen so many beautiful places. South Africa’s Table Mountain is breathtaking. The people in Mexico have always made me feel so welcome. China is full of history and wonder. Then there’s the beauty of Paris, the castles in England, the AUTOBAHN in Germany, the canals in the Netherlands, and the snow in Sweden, the free spirits in Canada, and on and on. I’ve been so fortunate to travel to all these countries, and each place I go has something so unique and special. And they all have something so much in common: the people.

I’ve competed against communists, socialists, protestants, Catholics, Jews, whites, blacks, reds, Asians, and even democrats and republicans…and they all raced hard and pretty much all reacted the same AFTER the competition. Those that lost were sad and disappointed. Those that won were happy (and some celebrated their wins with flamboyancy and flag-waving — even some who WEREN’T American). But no matter what the level of competition, after the race we were all OK. The race didn’t prove who was a better person, society, religion, or culture. Instead, the race helped us become friends. And the fact that some of the winners celebrate by waving their country’s flag is just something that comes out. It’s a natural reaction. But now it must be controlled, at least for the American athletes, and I guess it’s for a good reason.

Each time I travel, I find that those of us who have common interests, really get along well. I’ve been sheltered in my travels to be surrounded by people with the common interest of swimming. Because of that, maybe I don’t get to see what the masses think about Americans. I do, however, think that if there is even a sliver of civility among us, there is hope.

This is where the reality of the situation comes in. The masses don’t get to meet Americans as people. They see what our politicians do. They see our policies and project them onto us as a people. Agree or disagree with the policies here in America, they are a symbol of who we are worldwide. If you don’t like the policies right now… wait a few years, they’ll change. If you don’t like who’s in office right now, you’ll never have to wait longer than 8 years for a change. But the Olympics come every 4 years, which DOES give us an opportunity to show what we’re really like.

Because of this, I do feel that great athletes have a HUGE responsibility. I always felt when I traveled abroad that I was a representative of our country, and tried to be as polite as possible. I hear so much about American tourists and how they act, and I agree — many of them do some very embarrassing things. Our athletes must strive for a high standard, just as they strive for a higher standard in their sports. They will have to be respectful of other cultures and, when put on the world stage, they must learn to control their emotions and hold themselves to a higher standard. According to the article that I read, the USOC wants to show the world "humble pie" rather than "American pie." To take that a step further, it seems to me the ONLY way to really make everyone happy…is for us to lose. While that’s not an option for the athletes who have trained for many years, they must come to understanding the responsibility they’ve just had placed on them should they earn an Olympic victory.

I’ve had such great opportunities to know and work with many Olympic champions, and they are wonderful people. This isn’t going to be a tough task for the swimmers. I have much faith that our athletes will respect the wishes of the USOC and tone down their victory celebrations. I think this is absolutely a step in the right direction. In my humble opinion, we need to show sportsmanship, respect toward others, and the willingness to fight to the bitter end to win. I like that the USOC is instructing these athletes to show respect for other cultures, and instructing them on how to BE sportsmen and sportswomen.

I’m just sad that we have gotten to this point in athletics that the athletes need to be told how to act. This is where I think we’ve failed as coaches and teachers. It is WITHOUT a doubt, something I’ll be more aware of when I work with kids.