It can be dangerous to get set in your ways. Sometimes you just have to TRY something, and it can change your mind. It couldn’t have been more than a week ago that I was talking with someone about Zoomers. I kind of dismissed them, saying, “I tried them years ago, and I just didn’t get it.” So, I never had a pair in my swim bag because I didn’t like them… that one time…years ago. 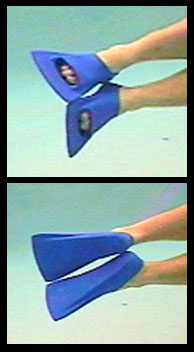 I got a call last week from the founder of Finis, who recently acquired the Zoomers brand from Dr. Marty Hull (a Stanford NCAA Champion in the 200 Breaststroke). I told the Finis representative that I had tried Zoomers and wasn’t partial to them, but he asked me to take another look at them and possibly write a review. He seemed confident that if I tried the BLUE Zoomers (I had tried only the RED Zoomers before), I would find them much easier to use and easier on my feet. I kept thinking I was in a Matrix remake…take the BLUE ones….

Anyway, a couple days later the box arrived. I pulled on a brand new pair of BLUE Zoomers and hopped in the pool. I started swimming back and forth and, sure enough, I was kicking pretty consistently, and pretty smoothly. As the Finis rep had predicted, the Zoomers pretty much WANTED me to continue to use a 4- or 6-beat kick as I swam. It was almost as if the slight increase in surface area had awakened my feet, and was telling them to KICK.

After about 5 minutes, I started to realize how DEAD my legs were getting. This was a very good workout and, again, my kick was consistent and not forced.

I started to wonder why I liked these so much more than the RED ones I had used before, so I decided to do a little research. Dr. Hull has already answered this question. The RED ones are for competitive swimmers with an efficient flutter kick. The BLUE ones are mainly for fitness swimmers or others who DON’T have an efficient flutter kick. Oh man… was I BUSTED. No wonder I liked the BLUE ones. My flutter kick STINKS. The RED ones are also 5-6% stiffer so, with my tender skin, I’m sure they made hot spots a lot quicker.

I went a bit further, and decided to compare them to my favorite fin, the PDF (Positive Drive Fin). Now, I must confess, I pretty much got rid of all my other fins when PDFs came out. This really is because I RARELY kick anything other than breaststroke, and the only fin that I feel good adding to my swim bag is the PDF, which can be used for breaststroke. I had a pair of the Zura Alpha fins, which I also like, but which were STOLEN by one of my swimmers (you know who you are), and I need another pair to play with. So, in the comparison, I quickly realized that the extra surface area on the PDFs caused me to slow down my stroke rate when I wanted to add the 4- or 6-beat kick to my stroke. While they’re GREAT for breaststroke, it turns out that Zoomers are much better for freestyle.

To be fair, I also tried the Zoomers for breaststroke… and… I’m going to stick with my PDFs for that.

So what’s my take on these? Well, I’m NOT sending them back. I think they’re a great tool for freestyle, and more than likely backstroke and butterfly-type drills. They really allow me to add a consistant kick to my freestyle without being overly demanding. They slightly increase my speed while this is going on, allowing me to get closer to race pace for more of my practice.

Even though I’ve said some not-so-nice things about Zoomers in the past, please don’t think of this as political waffling. Take it in the way that I have — another reminder that as I get older, I can’t get set in my ways and must revisit things again and again. As we learn more, we have a better perspective to look at things differently and to make fresh judgments.

For me, I’ll be keeping my PDFs but, since they’re small and inexpensive, I’ll be adding the BLUE Zoomers to my swim bag.

Pick up yours here.