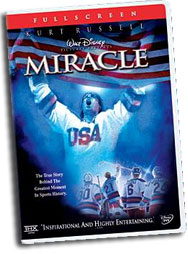 So I finally rented MIRACLE, the story of the 1980 US Olympic Hockey Team. While this may not seem like such a big deal, it was to me. It’s hard to explain why I hesitated seeing this movie.

While the Winter Olympics were going on in Lake Placid, I was in Cincinnati, Ohio, training for the Summer Olympics with 40 other athletes. When the US Olympic Hockey Team was going through its games, we couldn’t help but get drawn into the excitement. Even our coaches got into it, using the team as an inspirational tool to help motivate us swimmers.

How could we NOT get excited about watching? The US hockey players were our age, and they overcame huge odds, exemplifying the true Olympic ideal. They gave us hope that we could have some sort of impact on the nation as well — I mean — if we actually ended up making the team, and went to the Olympics, and won a medal, we could maybe inspire a lot of OTHER athletes. It was a lot of ifs, but it sure was an exciting time to be an athlete.

As it turned out, just a few months after the US Olympic Hockey Team had uplifted the nation with this tremendous victory, several of my teammates and I made the US Olympic Swim Team, and our President decided we shouldn’t go to Moscow for the Summer Games. So, as you can see, renting MIRACLE and reliving the great victory of the hockey team brings back mixed emotions.

But…on to the movie. This won’t be a normal movie review, because this really isn’t the place for that (but I do hear SHREK 2 is GREAT). There were a few things I loved about the movie, and a few things I didn’t love.

First, the Coach, Herb Brooks. Man, were all the coaches in 1980 like this? At one point in the movie, Herb says, "I’m your Coach, not your friend. If you want a friend, there’s the assistant coach." With that, Herb walked away.

I specifically remember one really hard week of training. Our team was so demoralized from the pain and constant work that we requested a team meeting with our coach, Denny Pursley. We wanted to talk about how we needed to hear him tell us how good we were doing. We needed affirmation that we were doing a great job, and that everything would be fine. Denny’s response was something along the lines of, "It’s not my job to make you feel good. It’s my job to make you WIN." With that, we got back in the pool. It was the shortest team meeting I’ve ever attended, and I’ve been in a lot of them.

These were no-nonsense times. You worked without questioning anything. If you did question, the answer was: more work. Herb Brooks had a captive audience. As a coach, this is a dream situation. He had 26 hockey players vying for 20 spots. All of them HAD to do what he said, or go home. It was that simple. In Cincinnati, it was almost the same situation. Many of us were living away from our homes, and there was no place for us to go. We had to put up or quit.

At one point in the movie, Herb was upset with how his players had performed during a game. Not that they didn’t win but, rather, that they didn’t show the fire necessary to move forward. As the crowd and other team were leaving the building, Herb had his assistant get the team back on the ice for a training session. Everyone was tired, but not tired enough. The system was that Herb would tell the assistant to blow the whistle to have the players skate back and forth, hitting respective lines on the ice. In between each segment, Brooks would dig deep into their psyche, and mentally challenge them. He’d then turn to the assistant and say, "Again." Each time, the assistant would show a look of disagreement, disgust, and disbelief that Herb was doing this to his players. I don’t know…I wonder if this is how the assistant REALLY reacted. As coaches, you can’t show outwardly to your team any discontent, or conflict in the method, but rather a unified message. Besides, this is what coaches DIG! It’s great to see athletes pushed beyond the point they want to give. It’s great to witness the man or woman who gives more than they ever thought possible. THAT’S what being the best is all about.

In the movie, I feel they tried to humanize the training by only showing a few of these sessions, and by showing that even the assistant coaches were empathetic to the athletes. That’s my whole point, though. Training like this ISN’T human. It’s what humans AVOID! This type of training is what normal people walk away from — which is what makes these athletes so admirable. I have a sense the assistant coach was a little more on board with this training approach than the movie gives him credit for. Or, quite simply, I doubt Herb Brooks would have had him on board. Our assistant Coach, Frank Bush, was certainly in cahoots with Denny on the pain thing, I’ll tell you that much right now!

Finally, the moment of victory in the movie was anti-climactic. I knew what was going to happen, and had watched it for real. I was into it at the moment it happened, and the movie gave me chills remembering it. It did remind me, however, that movies are no substitute for the real thing. Movies can’t give you the sense of the pain these athletes went through to prepare for their victory, nor can it show you the sense of joy and relief when the victory finally came.

I know I’ll be watching for all the little miracles that’ll be taking place this summer, and it’s going to be even sweeter to know some of the people involved.

Oops, I almost forgot… I give the movie a GOLD medal rating, and a TWO THUMBS UP rating. Any movie about an Olympic Victory is tops in my book and will certainly be added to the summer camp viewing arsenal being put together as we speak (Dickie Roberts won’t be).