Growing up as young swimmer, I looked forward each month to a new issue of Swimming World magazine. Long before I even had a chance to be IN the magazine, I’d read about the stars of the sport. I’d read about the Collela’s, John Hencken, Shirley Babashoff, and, eventually, started seeing my big brother Kevin’s name appear. Seeing your name in Swimming World was like making the BIG TIME! 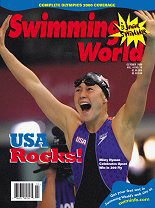 When Swimming World arrived at the house, we’d start ripping through the pages to get to the center, the MEET RESULTS. As young swimmers, we knew this was the ONLY place our names were going to appear… and upon seeing that they only published the first three places of a meet I got fourth in… it made me want to be just a little bit better.

Seeing Kevin’s name in the big time, the Senior National results section, with REAL articles was HUGE. It opened our eyes, in North Ridgeville, Ohio, home of the Corn Festival, to the rest of the world. Our family was simply… swimming nuts.

Long story short, I actually had a shot at getting on the cover once. In 1980, half the Olympic Team headed off to Hawaii for a meet, while the other half went to China. I went to China. One day, we hopped on a bus and traveled six hours to visit the Great Wall. When we got off the bus, we could barely stand still, so William Paulus (great butterflier), Steve Lundquist (watched him pull away from me MANY times, breaststroker) and I decided to have a running race to the TOP of the Wall. While the three of us (all very skilled runners, by the way) raced up, the rest of the group gathered for a team photo…the one that appeared on the next cover of Swimming World magazine. I look back at that cover and think… maybe if I could have just sat still for a couple minutes…but NO…I had to RUN….

In case you didn’t hear, yesterday, Sports Publications International named me as Technical Advisor for Swimming World, SWIM, and Swimming Technique magazines. It’s quite an honor, and we’re all really excited about it around here. To be associated with THE premier team in swimming information is great. I’ll try to put it into publishable words… COOL!

Well, in the immortal words of Navin R. Johnson, Inventor, “I’m in print, things are going to start happening to me NOW!”

If you don’t already subscribe to these magazines…sheesh…and you call yourself a swimmer?!?!

Head over to www.swiminfo.com and get yourself signed up. And while you’re on the sign-up page, check out the video of our favorite butterflier, Misty Hyman, who just happens to be the spokesperson for Swimming World.