> Our Friends at US Olympic Swimming Trials | GoSwim TV

Last week, I had the privilege of heading to Long Beach, California, to watch one of the most intense athletic competitions in the world. In thinking about how to describe this event to our readers and to those who watched the Trials on TV or followed the coverage in the major newspapers, one phrase comes to mind: There are two sides to every story.

I had a vested interest in many of the swimmers who competed in Long Beach. Over the past few years, I’ve worked with several of them, and have even filmed them for videos. I’ve gotten to know them as swimmers, individuals, and as people, and they are some of the classiest, hardest working, most dedicated, committed people I’ve ever met. Each and every one deserves to be rewarded for their efforts in reaching the pinnacle of their sport. The nature of Trials, however, is that only a handful of these tremendous athletes can make the Olympic Team. The others — even though they gave their all at Trials — will leave the pool with, in their minds, some unfinished business. 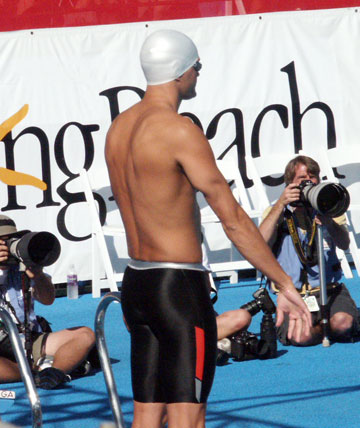 Where do I start? Why not with the person I consider to be one of my best friends, Dave Denniston. Dave has become a staple here at goswim.tv, and he and I talk just about every day. He has helped me gain credibility for my business, and we have spent countless hours laughing together. His history in swimming is matched by only a handful of athletes. Dave is one of only a few swimmers who have cracked into the :52s and 1:53s for the short-course breaststroke events, and there are not too many swimmers who can write “NCAA Champion” and “World Championship Team Member” on their resume. Or “Olympic Trials Finalist,” for that matter. For the rest of his life, Dave will have these unique and elite accomplishments as a source of pride and reflection — and as motivation for his future endeavors. Watching Dave swim is always pure joy. His stroke is about as perfect as they come. It’s easy to teach, and has already become a great model for so many people. His knowledge of the sport is vast, and whatever he ends up deciding to do with his life, he will ultimately be a great success. People just LIKE to be around Dave, and he deserves so much credit for everything he’s accomplished. 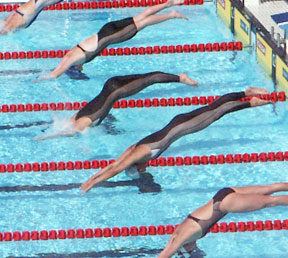 Misty Hyman has done it all in the sport, from capturing multiple NCAA and National Championships, to winning individual Olympic gold. Going into the Long Beach Trials, there was nothing that she had to prove — except to herself. She trained hard, focused on her goal, and left everything in the pool in her races. Nothing can ever be taken away from her. I happened to be on deck right after her 200 butterfly race, and I was struck by how much maturity and class she showed as she walked by, assuring her many fans that she was OK. As with Dave, people like to be around Misty because she is a wonderful, upbeat person. We can all learn a thing or two about class by watching her. We can also learn MANY things about swimming from her as well…I mean…come on, she’s beautiful to watch swimming fly!

Jeff Rouse came back after several years of retirement to make the finals of the 100 backstroke — at age of 34. No matter how you slice this one up, that’s an incredible feat — and a testament to the level of technical perfection he’s achieved in his stroke. His performance in that final heat of INCREDIBLE backstrokers shows what technical mastery can do for longevity. Jeff is also a total class guy who will always be remembered for his great Olympic victories back in 1996, and for the great showing he made this year.

Scott Tucker has won a Gold and a Silver at the Olympic Games. What else ever needs to be said. Although he wanted another, his career is more complete than that of just about any other swimmer. Making two Olympic teams is something that happens only to the best of the best. To go for three begins to separate you from the cream of the crop. Scott is soft spoken, but tremendously aggressive in his training and competing. He deserves all his victories and we congratulate him on a fantastic career. 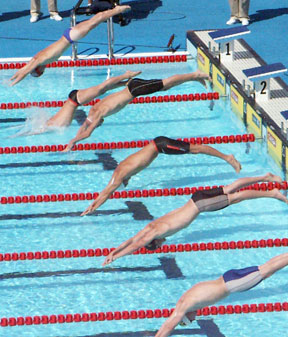 Kevin Clements is one of the most versatile swimmers ever. From his 15-minute mile, to his sub-2:00 200 IM, he can swim just about anything faster than most anyone. His power through the water comes from a tremendous work ethic and commitment to excellence. I’ve watched him train, and the word “animal” barely describes the way he attacks his sport. It’s inspiring to watch Kevin swim, and he, too, will always do great in whatever he chooses.

Staciana Stitts is simply beautiful to watch, in and out of the water. She, like Dave, has a stroke that FLOWS, and that’s easy to teach. She swims such a technically perfect breaststroke that, as a coach, I would simply make her swim, and tell all the others, “do that.” An Olympian in 2000, her speed and power at the last week’s Trials was unmatched by anyone. Her performance can be credited to the work she put into both her training, and her technique mastery. Her smile out of the pool is legendary, and her outlook on life is inspirational. I feel like a better person just for having met her, and to work with her and be around her is simply FUN. She IS what the sport is about.

I had many other friends at the meet, swimmers such as Mark Gangloff from Ohio (congrats on your Olympic berth), Maggie Bowen, a great champion from Auburn, and Diana Munz an old friend from Cleveland who made another Olympic Team. I also had a chance to renew my friendship with many parents of swimmers, such as Scott Spann, a great swimmer himself, with a son and a daughter both competing at Trials, and Dave Denniston’s Mom and Dad, who have stood by their son, wishing only for him to be happy.

This meet is all about tremendous victory, as well as tremendous heartbreak. Anything worth risking that much for, also has an incredible downside. I learned long ago that there’s nothing I can say to make these swimmers feel better, other than letting them know how proud we all are of them for their efforts. The rest of us would feel lucky to attain a tiny FRACTION of their success. Sure, I was one of them once, but that was a long time ago. Like everyone else, I’m a fan now, and a friend.

So, Dave, Misty, Jeff, Scott, Kevin, Staciana, Mark, Maggie, and Diane…From all your friends here, and everywhere, rest assured we are all very proud of you and can’t wait to watch you swim again… no matter when. You’re all artists and great people.

One last item, I forgot the tremendously exciting swim from Jessica, who has posted at our site. This young swimmer did a GREAT job in the 100 breast, attacking right from the beginning of the race in the finals, and actually giving a great run to make the team. Watch out for her in a few years, she’s already TOUGH as nails. Great job Jessica, I was yelling for you (and Staciana).