Our Friends at US Olympic Swimming Trials →

What happens when you get 200 past Olympians and National team members together at the Olympic Trials? To be honest, you get the BEST ab workout you’ve had in YEARS.

It’s taken me a couple days to recover from the National Team Reunion in Long Beach. I can’t remember when I’ve laughed so consistently for so long. From waking up in the morning, to putting my head down on my pillow at night, my face hurt (no comments here) from laughing…or sunburn…whatever.

When I was a swimmer, one of my arch rivals was a guy named John Moffett.   He was a GREAT swimmer. World Record holder in the 100 breast, multiple-time NCAA Champion, and master of the GAME FACE before each race. We always remained friends, but this past week, we REALLY had a great time. My other great friend from the sport is Craig Beardsley, past World Record holder in the 200 fly and, like John Moffett, a fellow team member on the 1980 Olympic Team. The three of us ended up hanging out quite a bit, and it was GOOD… tiring, but good. 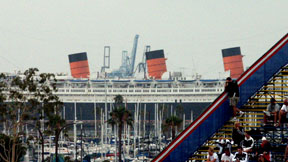 There were functions galore — dinner, lunch, brunch. The big decision each night was where we’d all meet after the finals. We were hanging around with Olympians from the 30s, 40s, 50s, 60s, 70s, 80s, and 90s. I can’t remember hanging with anyone from the 2000 team, but they were probably still swimming. The history in the sport is amazing at these get-togethers. Olympic Champions are a dime a dozen. Past World Record holders? Oops…just bumped into another one. Olympic Coaches? There were so many coaches that I was doing two-handed turns off my friends’ heads. My coach from Alabama (and 5-time Olympic Coach), Don Gambril, was on hand, and he kept making sure I was staying in line. Half the time, I kept wondering what the heck I was doing here with all these terrific athletes, which is why I just tried to keep them laughing. 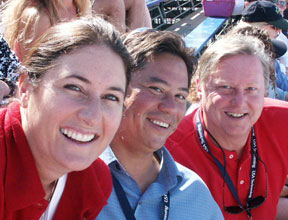 We stayed on the Queen Mary, which we could see from the pool. We kept trying to decide if the halls reminded us more of the Titanic, or a scene from "The Shining" with Jack Nicholson. Either way, the boat has a reputation for being haunted. It wasn’t for lack of searching, but we failed to see any ghosts. 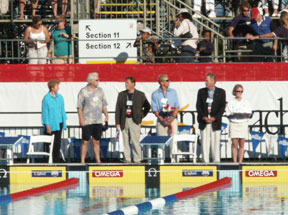 The highlight for me came a few days prior to the start of our summer swim camps, when Brian Goodell (1976 Olympic Champion, 1500 free) wrote and asked if I would participate in the awards ceremony at the Trials. Are you kidding? Yes, I think I might like to do that. What an honor! The next highlight was when I actually gave out the award. I was going to walk out in front of 10,000 swim fans with one thought running through my head: "Don’t trip." I presented Brendan Hansen a banner, while Richard Schroeder(1984 200 breast — ouch…that was MY spot…still a good guy though), and Bill Mulliken (1960 Olympic Gold 200 breast) gave the flowers and medal. From on deck, the pool actually looked short with all the grand stands around it. Maybe that’s why all the records were being broken. In case you’re not sure which one I am in the picture…I’m the short one in the middle. 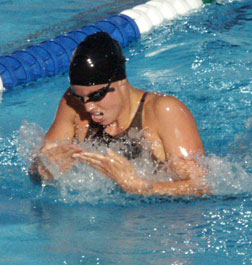 In case you’re wondering why I’m writing this…hey…I’m NAME DROPPING! I have always been, and will always be, a FAN of swimming. Attending the reunion of Olympians at the Long Beach Trials gave me the unique opportunity to hang out with some of my heros, and others that I have watched from afar. I consider this whole thing an honor, and highly recommend making a National Team to ANYONE who’s interested. Sure, it takes years of hard work, dedication, commitment, pain, agony, sacrifice, joy, and sadness, but heck…I swam for 17 years, and have now been officially retired for 20. I can’t remember how bad it hurt, but I can sure continue to enjoy it for the rest of my life. 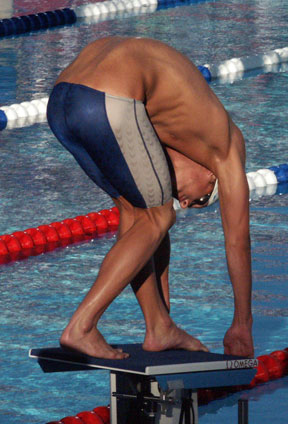 By the way…the swimming was pretty good, too, as you can see from a couple of the pictures. Giving away an award gets you pretty special seats as well.

Our Friends at US Olympic Swimming Trials →