Cradled between G.I. Joe and The Smurfs was a Saturday-morning television show called The Snorks. I didn’t realize it at the time, but The Snorks shaped my personality at an early age. This was back when you had to turn the knob on the TV to change the channel, and way before computer animation. I believe it was even before Nintendo, the original, with Super Mario Brothers and Duck Hunt. 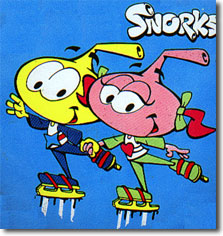 The Snorks were happy, sea-going creatures that had snorkels coming out of their heads. It was a lame cartoon, but a cool idea. Now, with the help from a thing called the Center-Mount Snorkel, I have become a Snork. And a Blue Whale. Sometimes even a Dolphin. I can become, well, anything that can blow water out of its head. My teammates find this very amusing. They may secretly disdain me, but I think they are just jealous. Before you, too, can be a Snork, or a whale, you have to buy your own snorkel. Here’s my review on the Center-Mount Snorkel by Finis. I have rated the snorkel in four different categories (Durability, Comfort, Utility, and Value, with five stars being the highest rating. 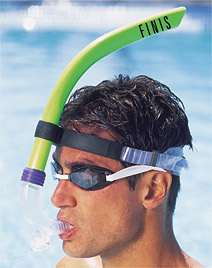 I’ve had my snorkel for nearly seven years. It has outlasted four equipment bags, has been on the bottom of at least ten pools, and has been in three different mouths (that I know of). It has also survived the back of my 1996 Nissan Pick-up, And still, it works like a charm. Granted, my snorkel tastes a little funnier than most, and the once-clear mouthpiece now has a brownish hue, but it works as well as on the first day it was given to me. The snorkel is my friend. He just really needs a bath.

Comfort ***
The headband takes some adjusting and getting used to. It’s good to wear a cap while wearing the snorkel, because the headband can pinch. The mouthpiece is soft and comfortable. Once you learn to use the snorkel (the big thing is learning to purge it, and learning not to turn your head to breathe), nothing is more relaxing during a long pull set than having this on. You can just focus on your stroke and go.

At first, but I added more stars with time. (Am I allowed a progressive star count?)

Learning to use this thing is tricky. My teammate and friend, Dan, has not bonded with his snorkel because he can’t figure out how to turn with it. I tell him his snorkel is his friend. He scoffs and says, "My friends don’t try to kill me every time I turn!"   So it takes some practice. What is really nice about these snorkels is their one-way valve in the bottom. If you blow with a powerful puff after a turn, water will shoot out the top of the snorkel and the bottom of the one-way valve. It’s really cool, but you have to remember to keep enough air in your lungs to puff the water out. Like I said, once you figure out how to turn and breath with this thing, it’s relaxing to wear.

Value ****
As long as you don’t lose it, you’ll have your snorkel for a long time. You will also use it regularly. It’s much better than a side-mount snorkel for swimming laps or long distances because it won’t jerk your head around while you swim. And, you can swim very fast with the snorkel, no problem. The snorkel may seem a little pricey, but there are several pieces that go into making this an efficient and effective training tool. It’s worth every cent.

You can do all kinds of things with your snorkel besides just swim. I’ll outline them for you here:

Pre-Warmup-Burgerkingquarterthing Game
Okay, this game is patterned after that aquarium thing that has water and you’re supposed to land a quarter on one of the pads to win a free ice cream or fries. Just go to Burger King to see what I’m talking about; they always have one. Or, you can play the game every day at practice, and it’s free. The challenge is to fling your snorkel into the water from the deck, and land it on the "T" at the bottom. No part of the snorkel can touch the white of the pool, only the T. If the snorkel lands on all black, you are an expert. If you land it directly on the center of the T, you are considered a grandmaster. I am not a grandmaster. I hope to achieve this feat soon.

Kicking
Some might say that a kickboard is the piece of equipment you should use on a kick set. I say a Snorkel is the best thing you can use. It keeps your head, neck, and shoulders in perfect alignment the whole time. It’s really is great for this. The snorkel is also quite useful for body-position drills because you don’t have to throw your 8-pound head around to get a breath, which in turn throws you off balance. It really makes finding the right line significantly easier.

Underwater Mammalian Game
With time, you will learn to position the mouthpiece just right and make sounds similar to those of a killer whale, a blue whale, and even the much-recorded humpback. Because sound carries really well through water, your teammates will soon wonder what is going on. They will envy you, and try to communicate with you how annoying that sound is. Your coach might even tell you that the sound is bothersome. For the preservation of the sanctity and coolness of whales everywhere, continue on. When your entire team plays this game, it sounds really awesome underwater. It’s just like you’re in the ocean with a bunch of whales (I don’t really know what this sounds like; I’m just guessing). The truly advanced snorkel experts can make dolphin noises with clicks and whistles using the snorkel. It’s a magical moment when this happens. You might even stop and look for the dolphin.

Shooting-People-in-the-Face Game
I love this one. Ever have that annoying girl who won’t shut up directly behind you? I have. I fill Snorkel up with water, and when she’s mid sentence about how her history final was soooo hard, I give a giant puff and WAMMO, right in the face. The only downside to this is that she’s behind you and you don’t get to see her reaction, but usually you can hear it. You’ve really succeeded when you can get her to choke momentarily on the water you’ve just spouted down her gullet.