OCC Has Nothing on Me →

Last week I had the opportunity to spend a day with my kids driving go-karts. Those of you who know me, understand that when I’m not at the pool, I’d rather be driving something. The chance to drive karts is always something I enjoy.

Now, how could I possibly turn driving go-karts with my kids into an article about swimming? Here goes: 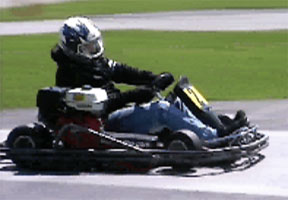 No matter what type of kart we were driving, it was fairly easy to tell the difference between the people who knew what they were doing, and those who just wanted to go fast. I mean, I’m not an expert, but I have raced really FAST karts before, and these machines are all about momentum. There’s no clutch; you just press down on the throttle and build up some speed. From there, it’s all about maintaining that speed.

In driving, I learned a long time ago, it’s not about how fast you go into a turn, it’s about the speed you carry OUT of the turn that matters the most. You can watch people at karting tracks completely miss this. They try to stay as tight as possible to the inside of the turn, and end up scrubbing off needed speed and end up too wide on the exit as well. These people are sitting ducks for those highly skilled drivers who know it’s sometimes better to start wide, and create a smoother line through the turn. No jerking, but a smooth line.

Now, already I’ve hit on TWO key components of swimming, and it’s not even about turns. It’s about maintaining momentum, and staying smooth, or limiting extraneous movements. 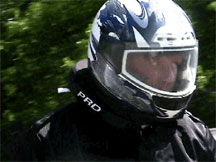 Swimming is all about maintaining momentum, like the momentum you get from the starting blocks, or from the wall on a turn. Those who get too excited about swimming fast, have the potential to not milk that momentum, and actually disrupt it with a poor first stroke. Just like those uneducated drivers at the kart track, who try to win going IN to the corner, the swimmer who tries to win by being the FIRST to swim rather than by merging the momentum off the wall with the power of the first stroke.

Smoothness comes into play when you consider the meaning of the word smooth. This week’s Drill of the Week (Backstroke – Spin Drill) is a harsh, hard-hitting, ugly drill that promotes an aggressive stroke. I’ve seen, however, people look somewhat smooth doing it. For example, if you watch Jeff Rouse do that drill (on our new DVD Go Swim Backstroke with Jeff Rouse), you see that although his hands slam into the water, they achieve smoothness under water. Smoothness for swimming doesn’t necessarily happen ABOVE the water, but rather UNDER the water. At a certain level of swimming, it seems to me that almost NOTHING that’s done above the water matters. There are so many different styles among the greatest swimmers, but go under water, film them, play them in slow motion, and it’s ART.

Driving is also about the lines that we take through a course, whether it’s in a car, or a kart. Swimming is also about lines, the direction in which you’re traveling. Swimming straight down the pool is very important in a race. It means you’re taking the shortest LINE, rather than circling. The lines in karting are about the same thing, smoothing out the turns to create the straightest line that allows you to maintain momentum. See, it’s all connected. One thing leads to another, which leads back to the first. It’s like the Lion King, it’s the circle of life all over again.

The best thing about analyzing all this stuff comes down to one thing. As we were leaving the track, my son looked at me and said, "Dad, you WIN every time!" It’s my hidden skill, at least it’s what I tell the police when they pull me over, "But, Officer, I WAS JUST PRACTICING RACE PACE!"

Lines, smoothness, momentum, and thinking through the course (race strategy prior to starting). It all works together, which is why — in order to learn to be a better swim teacher — I’m heading to Lime Rock race track in September with Barbara’s husband, and we’re tag-teaming in a 6-hour endurance go-kart race. These karts are a bit different than the ones I was on with my kids. We’ll be bruised and sore by the end of 6 hours, but all the planning and technique will be completely necessary in THAT race. Of course, I’ll be training for that competition through swimming. I mean, they’re the same thing, right?

OCC Has Nothing on Me →