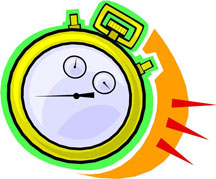 Here is a little number that I like to call Dream On. It might sound a little harsh but it is meant to get swimmers to think big (not that they couldn’t do this on their own, but the set helps). We did this test set throughout the season last year. In the middle of the season we used it to get the swimmers to think about what was possible and how much work they had ahead of them. When this set is done at the end of the season, it is a good way of letting you know exactly where you are.

The set is 8 x 75 with easy intervals and descending swimming. It is designed to be a predictor of your 100 performance. I think that the 75s are a good indicator for your 100 race. A 25 is too short to get an accurate read of what your body is capable of doing. The results of a 50 can weigh heavily on your start and turns. The extra 25 puts another turn into the equation as well as adding more fatigue. Having an odd distance also helps to relieve some of the anxiety that comes during taper practices.

Your Goal Time in the set is your goal time for 100 SCY by the end of the season. (If you’re swimming SCM or LCM, adjust intervals and goal times accordingly.) Give yourself enough rest so your body will be able to fully recover in between each 75. The first two 75s should be really easy to make (if you can’t make you 100 goal time in a 75, you should consider revising your goal time). The next two 75s should be moderately more difficult. Numbers five and six should be fast while still working on feel. You can adjust the time you want to be under goal time to fit your needs. The final two will give you an idea of where you are in relation to your goal time.

Here’s an example to show how the set works. Let’s say your goal time for a 100 is 60 seconds. You need to swim the first two 75 in one minute or less. On the next two you will have to go at least :56. On the final two from a push, you will have to go :54 or under. After the first six you get up on the blocks for a reality check with two all out. Clock your time on the final two 75s and extrapolate a fourth length. For example, if you went a :45 from the blocks for a 75, you would be averaging 15 seconds per length. For the extrapolation, add :45 and :15 and you get 60 seconds. In this case you would be right at you goal time. This can be a great set to use about three or four times throughout a season. The first time you shouldn’t be able to get to your goal time. The second time you shoudl be hovering right around if not at your goal. The last time you do it you want to be able to crush your goal time.