The other night, while watching the Olympics, I had flashbacks to 20 years prior — when I watched the 1984 Olympics in Los Angeles. It was a rough week for me as a TV viewer back then, because I had sorta planned on being on the blocks in LA, and not sitting in my living room. But at Olympic Trials I missed making the team by 5/10ths of a second. Watching the Olympics on TV was hard, but something I couldn’t miss. I had many friends swimming (including Geoff Gaberino, who shares some of his experiences below), and I wanted to feel a part of it.

Watching most of the meet was kind of depressing, but so many things went so well that, as a fan of the sport, I couldn’t help but get excited and chills. Just as Michael Phelps is the man to beat in Athens, the star to watch in 1984 (other than Rowdy Gaines, Tracy Caulkins and many other friends) was Michael "Albatross" Gross. At this meet, Gross was supposed to dominate his races and was heavily favored in many races.

The West Germans also had an incredible team, and the US squad was a serious underdog. Rather than having me walk you through the entire race, you can read a FULL report and analysis by USA Swimming by clicking here. You can also watch a rough video of the race.

The similarities between the races are uncanny. And the similarities were not lost on Geoff Gaberino, a friend of mine who was a prelim member of that gold-medal-winning relay in 1984. Here are Geoff’s comments after watching the 2004 800 Freestyle Relay: 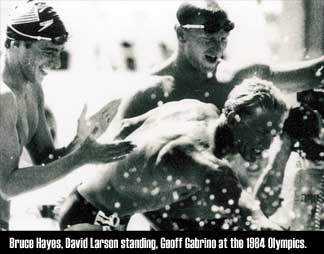 As a member of the Gold-Medal-winning 800 Free Relay, I could not help but think of the comparisons between our win in 1984 and the win by the 2004 team. We led off with our best swimmer (Mike Heath) in hopes of gaining an advantage over our dreaded rival — the West Germans. We got a lead that seemed to accordion from 1 to 3 seconds on each relay exchange (David Larson going second for USA and Jeff Float third). By the end of the 3rd leg, we were about 1.5 seconds ahead of the West Germans, who were anchoring the current world record holder in the 200 Free: Michael "Albatross" Gross. As the last leg unfolded, the Albatross caught our anchor leg (Bruce Hayes) at the first turn. At the 100 mark, Hayes was at the Albatross’ waist and it did not look good for Team USA. Hayes was able to stay in contact with the Albatross until 30 meters and then began to slowly make up the distance. I think you know how it ended…Team USA won by a mere .03 of a second.

And history repeated itself. The 2004 relay had the same lead (gained by Michael Phelps, Ryan Lochte, and Peter Vanderkaay) and was contending with the fastest 200 freestyler in the world: Australia’s Ian "Thorpedo" Thorpe. Klete Keller, in the anchor position, swam a perfect race, letting the Thorpedo expend too much energy in the first half of the race, which allowed Keller to hold him off by 13/100ths of a second for the win.

The win was certainly memorable for me, but what will always stick with me is the feeling of Team. Watching the sheer excitement on the faces of the 2004 team members, especially Phelps, made me remember the excitement I felt to be a part of a team representing my family and country. Those feelings were magnified because of the guys that shared that experience with me…way better than doing it alone.

For me, it was exciting to watch, even on TV. Think of it. More than seven minutes of intense hard swimming, coming down to hundredths of a second. Now tell me the little things don’t matter.

The 1984 800 Freestyle Relay still stands in my mind as the greatest Olympic swimming race of all time. I still remember watching it on TV and jumping UP AND DOWN…SCREAMING for my friends. The people around me thought I was nuts. They weren’t swimmers.

These two teams are linked by history, and tradition. They joined forces to overcome teams that others thought were superior. They’ll share this victory forever, and it will live on for many, many years through all of us who witnessed it.

Of course, this year we also add another 800 Free Relay to the mix of great swims. Just one night after the US men captured gold in the 4 X 200 Free Relay, the US women destroyed swimming’s oldest world record. They surpassed the record set 17 years ago (in 1987) by the East Germans. Tremendous job, Natalie Coughlin, Carly Piper, Dana Vollmer, and Kaitlin Sandeno! And Goeff!