I don’t want to jump on the Phelps marketing-machine bandwagon, but I heard a couple of things this week that I want to comment on. 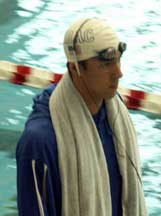 First, a friend of mine actually said that, somewhere inside, because of all the marketing hype, he wished that Michael wouldn’t have done quite so well. Now, this is a very nice person, and it wasn’t a spiteful comment. It’s kind of an understandable reaction — the result of being inundated with perhaps one too many Michael Phelps commercials. Commercials have a way of making the "stars" larger than life — not real anymore. But really, isn’t it great to see a REAL swimmer in commercials?

I’ve met Michael Phelps a couple of times, but he doesn’t know me from Adam, so I’m not claiming anything. One of those times was last year, when my daughter and I visited a practice at NBAC. After practice, Michael, unprompted, walked up to Sammy and began talking. Just like that. I couldn’t have been happier, and I haven’t seen Sammy smile THAT BIG since the time she got pulled out of the crowd at Disney World to take part in a Main Street USA parade.

Michael is a real person, and I think he has done a tremendous job in being himself at the Athens Games. I, for one, will NEVER forget the look on his face after the TEAM won the 800 Free Relay. He never allowed himself to show that kind of emotion for an individual performance, but when it was the TEAM, he went NUTS! That was real emotion, and it was great to see.

Nothing made him more real, however, than what he did after the 100 Fly, and we need to make sure we remember this. Giving up his spot on the 400 Medley Relay was not a little deal. It was a HUGE gesture of sportsmanship. In doing so, he gave up the opportunity to help his team (possibly) set a new world record. He gave up the chance to be a member of the one remaining USA relay that has not been beat. Although Michael did swim on the relay in prelims, and will be awarded the Gold medal, there’s nothing quite like being in the actual race. 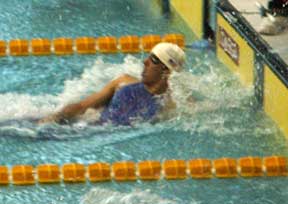 We have to remember: Michael’s inspiration to train for the 100 Fly was to beat Ian Crocker. Was this his way of thanking Ian for giving him such inspiration? Without Ian consistently beating Michael in the 100 Fly, would Michael have relaxed just a little bit in training, leading to both men getting beat by Surdinov (3rd by 11/100ths of a second)? Who knows. It was an amazing race, one that could have been won by any of the three swimmers. Had it NOT been won by Michael, we all would have missed out on the true sportsmanship that all kids need to learn.

Again, as someone who makes his living in the sport of swimming, I’m honestly excited by the fact that the classiest move at these Olympic Games came from a swimmer. Unfortunately, one of the most un-classy moves was also made by a swimmer, but I’m pleased that the swimmer who grabbed the headlines did so not JUST because of what he did IN the pool, but also because of what he did OUT of the pool.

For that, I think we all need to say a BIG THANKS to Michael.

← Dining Out, by Don Walsh