There are certain times in your life when you really get to just do something fun. When the fun involves competition, it’s all the better. When the competitive fun involves friends and family, it’s better still. 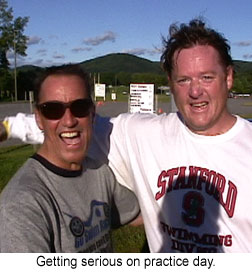 The weekend started early Friday, when my wife, Wendy, and I climbing into my little car, and hit the highway headed north. Six hours and one detour later (thanks to a funky GPS mistake), we pulled into Lime Rock Race Track in Lakeville, CT. Barbara and her husband, Kermit, were already at the track, and Kermit had just spent 8 hours in a smaller car than mine. He had taken a course to pick up insider information on how we were about to spend the next day.

We had all ventured to Lime Rock to take part in a 6-hour endurance go-kart race. Yep, thatï¿½s right, go-karts. And yep, that’s right, 6 hours. Keep in mind, these aren’t your run-of-the-mill, pick-one-up-at-Sam’s Club go-karts. These things are FAST. You get the feeling just HOW fast upon sign-in. One important question you’re asked is, "do you want the rib protector?"Answer YES to this one, trust me. 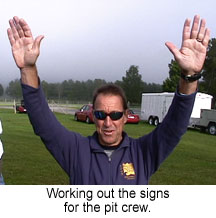 My partner, Kermit, and I were going to experience go-kart racing together for the first time. Both of us have raced things before — Kermit has raced Formula Fords and takes his personal car around the track when he gets the chance. I raced another, slower, go-kart once, and also take my car on the track when I can. At Lime Rock, however, we were both rookies, which meant we had a LOT TO LEARN. As I stated, Kermit took a day-long class, while I got my first opportunity to drive right after the 6-hour highway drive.

We snuggled into our karts for a twenty-minute practice session and I decided this would be my opportunity to find the "hidden" aspects of the track. In class, they teach you a lot of things to keep you safe, but they don’t reveal ALL the secrets, or ALL the secrets of this particular track. Safe to me, means SLOW…so I decided to push the envelope a bit on the first couple of laps. 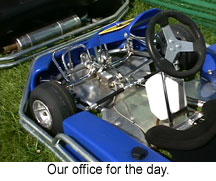 If you’re interested in knowing what it’s like to SPIN on the grass, dirt flying up, completely out of control in a go-kart, just ask me! I guess I had just passed Kermit on my great move (we were on the track with other people and couldn’t yet tell who each other was), and he was glad that the idiot who cut him off spun out. It wasn’t until later that he learned that idiot was ME. I told him I was just testing the waters for us, as a team. He didn’t buy it either.

That 20 minutes gave us an indication of exactly what we were in for on the next day. Karting at these speeds in these machines requires complete and total focus. If your mind wanders for even a SECOND, you lose time, you can lose your lead, and you can endanger yourself and others. We were tackling this 6-hour endurance relay as a two-man team! We were looking forward to complete and utter exhaustion. 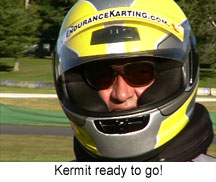 After a good night’s sleep, we got back to the track early on Saturday morning, September 11. The day really made us all sit back and think about all of the families who had suffered on that day a few years back, and how fortunate we are to still be able to take part in fun things like this. 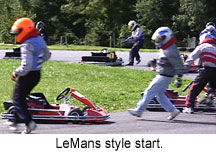 Kermit got us started with the LeMans-style start. He and the eighteen other lead drivers stood across the track from their already running karts. At the drop of the flag, each driver ran, jumped in his kart, and put the pedal to the metal. Being the smart competitors that we are, we judged that Kermit would do better on the quick entry into the kart than me, as he weighs about 60 pounds less than I do. I already needed a shoe-horn to get in, which would have cost us plenty of time. We were already thinking!

We had decided to start with 20-minute driving stints, thinking we would be fresh and could learn the track. We were required to make 15 driver changes throughout the day, and two of these changes would be mandatory 4-minute fuel stops. The fuel stops provided the only chance for Kermit and me to talk and compare notes — for the entire 6 hours. As it turned out, out of 19 teams, we were the ONLY team silly enough to have only TWO drivers. Whatever strategy Kermit or I came up with, we had to relay it to each other via our wives, who stayed near the pit area for the whole race. Kind of like playing that "telephone" game, but with the stakes a lot higher.

Kermit and I had originally thought that we might be able to do this relay with no outside assistance. As it turns out, if Barbara and Wendy hadn’s been in the pits, Kermit and I would have had a horrible day. After each 20-minute driving stint, we were hot and exhausted (and THIRSTY!) and in no shape to figure out how long to let our partner drive, how to flag him in, or how to share information with him. Driving these karts is demanding, physically and mentally. The difference between our fastest lap, and the fastest kart on the track was about 6/10ths of a second. However, we completed 495 laps in the 6 hours, so that adds up to us getting SPANKED by more efficient, and effective drivers. 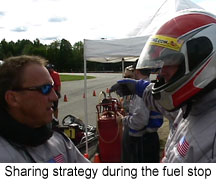 At the three hour mark, I couldn’t remember hurting this bad for years. My hands hurt, my hamstrings were starting to cramp, I hadn’t stopped sweating for 3 hours, was drinking everything in sight, and the fluid was only coming out through my pores. I really wasn’t sure I was going to be able to finish. We were doing well, but it was exhausting. I started eating peanuts and drinking more Gatorade and water. I drank so much that by the time Kermit came back in to switch drivers, I could feel all the liquid sloshing around inside of me. Down the backstretch, I remember feeling the liquid trying to find it’s way out, and thinking, hmmmmmm…full-face helmut, better control this. All the time this is going on, I was trying to drive as FAST and as SMOOTH as I could.

After a few laps, all was fine, and I started to feel great again. The focus was back, and I was picking people to pass. I realized at this point, that I had to change how I was driving. How I held the wheel, how I pressed the throttle, how I shifted my weight. Everything was about maintaining speed and forward momentum. I had to make sure I wasn’t using energy when I didn’t have to. Just like swimming, I had to isolate movements to be productive to really make it to the end. The thought process was very cool when you learned something, and how HAPPY I was when I did learn how to continue to go fast without the pain.

Every once in a while, one of the really fast guys would pass, and the class would begin.

Watching someone who is more skilled is the BEST way to learn at anything. Whenever anyone passed me, I would hang on to him for as long as I could. I’d watch their line, where they turned in, where they braked, and how they got their nose inside the others to set up the pass. Kermit also commented on this, and we found that the more tired we got, our knowledge allowed us to turn in more consistent lap times that were as fast, or faster than when we began the day.

By the end of the day, Kermit and I finished well. We placed third out of eight teams in the GT1 class. This class was for people who had raced SOMETHING, just not these karts before. Again, the ONLY two man team, and we made a podium finish. Not too shabby! 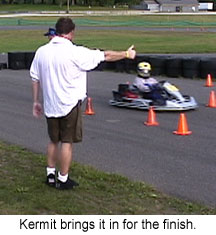 Learning while competing is a great thing. While there is much more opportunity to learn in a 6-hour race than in a two-minute one, that’s where preparation is key. I would have LOVED an opportunity to learn from the pros, but I had to discover what they did by watching. Kermit’s and my preparation was one-day, or the day-of the race. As a swimmer, you spend FAR more time preparing than you do racing, but HOW you prepare is the most important key. 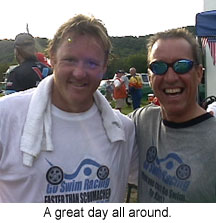 Can you learn how to race during your preparation, during your training? Are you simply going through the motions when you train, trying to get into shape, or are you thinking of HOW your training can aid you in a race situation?

I wish I could prepare to race every day in these karts. I had so much fun, and I could be a LOT faster if I had that opportunity. You have that opportunity in your swim training every day. It depends on how you look at it.

Try to have as much fun training as Kermit and I did racing. As it turns out, competition is competition. To be the best, you must prepare, and you must focus. The key is to be IN TO what you’re doing.

PS
If you’re interested in trying out this form of racing, and I HIGHLY recommend it… check out Endurance Karting. They put on a GREAT day, and they’re all over the country.