Ever wish you could talk to an Olympic swimmer and ask him or her what it was like? Not just what it was like to swim THAT FAST, but what it took to get there? In our series of Olympic Interviews, Go Swim asks Olympians past and present about their early years, their training, motivation, successes, and failures. Our first Olympian is Craig Beardsley, one of Glenn’s teammates on the 1980 US Olympic Swim Team. Between 1980 and 1983, Craid held both the World and American Record for the 200m Fly. He is also a [b]nine-time US National Champion, two-time NCAA Champion, and two-time Pan-American Games Champion.

I learned to swim in NYC at the YMCA around 4 yrs old. I remember how proud I was when I received my lifesaving card.

When we moved to NJ we belonged to the town pool and at about age 9, I joined the swim team (it was open only in summer). Our coach was a wonderful man named Tom Stanley. Tom was an ex-Marine and used to do 200 pushups at the side of the pool. I vividly remember how he got me to swim butterfly. He used to tie cord around my ankles after practice and we would work on my kick together. I never really thanked him enough for everything he did for me. 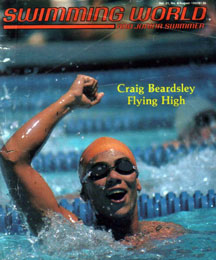 Our team had dual meets against other towns and ended with the big meet…Counties! I remember how great it felt to win ribbons and then finally win a trophy at that meet. All my medals and trophies are still displayed at my parents’ house, and I keep a few team photos with me. My teammates and I used to eat powdered Jello. It was supposed to give you instant energy. I think we all knew that it didn’t, and probably even hurt you, but no one cared.

During those summer years we had a couple of "real"swimmers who swam all year long. I didn’t know much about what they did, except that they won most of the races. Some of them must have noticed that I was doing well and asked me to try out for winter swimming.

At age 11, I tried out and made the Ridgewood YMCA team. We were coached by Frank McElroy, who coached me until college. It was pretty scary all of a sudden being around so many good swimmers. I was in awe of the older swimmers. I really looked up to them, and they definitely played a big part in my swimming career.

That season I started morning practices! I did just one a week, and wasn’t swimming every evening yet. It was tough for everyone. The pool was 30 minutes away, so we got up around 4:30am. I swam very well that year and made YMCA National cuts (I turned twelve that December). But we had too many good swimmers so I didn’t get to go. Ridgewood went on to win the YMCA National title. That was a big influence on me. Not being able to go even though I had made cuts really got me mad and motivated. I’m sure being in such a quality program forced me to think on a big scale. Here I was only 12 and thinking on a national level.

Some big changes took place that year. Frank decided to leave and start his own AAU/USS program. I followed without any hesitation. Some of the others didn’t, but we picked up a few new kids. All of a sudden I found myself part of the core senior group, and life began to change again.

At that time I was going to the United Nations School in New York City. We would rush there in the morning, my dad would drop us off (my younger sister swam, too), and he would go to work in NYC. After school we would rush to my Dad’s work and he would drive us back to New Jersey to workout. It was a very long day. We all went to a local public school the next year.

During all my early swimming years I also played other sports. I played a lot of football, ran some track, tried basketball, never baseball (I don’t know why), and some soccer, although soccer wasn’t an organized sport back then. I also played the cello, but more on that later.

During high school we started to have 3 morning workouts a week. Frank was a real believer in getting in the yardage, and we did A LOT! A typical main set was 10 x 500 or 6 x 1000 or some other huge descending set. We trained in all the strokes. I realized early on that I was not a breaststroker (maybe that’s why Glenn and get along so well?). 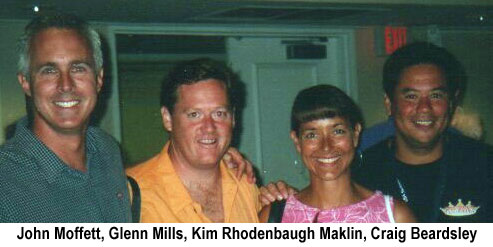 We didn’t have a high school swim team and I swam with my summer club for only a couple more years. I always thought that this was a contributing factor to my success. I was busy enough swimming for Frank that any more swimming would have created too much conflict. Again, this applies only to me. I know many great swimmers who swam high school along with their club team.

During this time I had to make other decisions. I dropped out of football. (Good thing, too, because the other kids were getting bigger!) I was also a serious cellist. I soloed and played in my high school orchestra. I was also accepted into the Manhattan School of Music. But it became too much for me. So I decided to back away from that and focus on my swimming.

By now I was seeing some real success. After a few trips to Regionals I was ranked in the top ten nationally in a couple of events. At age 14 I made Junior Nationals. Didn’t win anything, but it was a great experience. Even went to Ft Lauderdale before my 15th birthday to try to break the 13/14 200 Fly National Record. That didn’t happen either, but it was fun.

I keep talking about fun, but it wasn’t always. I didn’t like morning workouts. I don’t believe I know anyone who does. I wasn’t big on the running we used to do. But I realized that I had to do it if I wanted to improve. In my junior and senior year I started to take advantage of my coach/swimmer relationship with Frank, and we would have huge fights. I would walk out, come back, get kicked out, come back, fight some more and come back. But Frank knew what it took to motivate me. Looking back, I know I really needed him and my teammates.

At age 15 I made my first Senior Nationals. I went into it acting like a total spectator, not a competitor. I remember warming up in the same lane as John Nabor and totally geeking out. I think I consoled.

College swimming was a completely different sport. Randy Reese was my coach at University of Florida. I learned from Frank how important it was for me to maintain a coach/swimmer relationship. I totally believed in Randy and his program.

Of course, winning every time you swim isn’t reality. I’ve lost my fair share of races. I’ve also false-started and been DQ’d. It’s all part of the sport. What I have learned is that a swimmer can learn from winning and losing races. The one race I remember most is setting the World Record in prelims in the 200 Fly at 1980 Olympic Trials. I remember how easy it was, and how I felt that I could go on forever. I also remember after the race Randy blasting me on how bad my turns were and how much faster I could have gone!

Would I do it all over again? Probably. My best friends are from swimming. It gave me a chance to belong to a wonderful worldwide community to which, even to this day, I feel strongly connected.