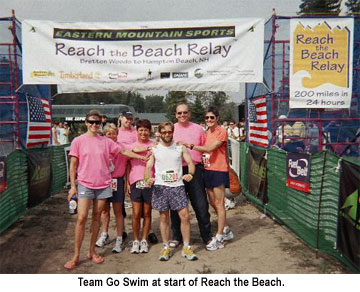 My love affair with relays started when I was eight. I was on the swim team at our local YMCA, and I have fond memories of what happened at the end of nearly every swim meet, when victory or defeat came down to the final leg of the final relay. We competed in a four-lane, 20-yard pool inside a TINY brick space with bleachers on one side. The decibel level was head-splitting, as teammates, parents, and coaches SCREAMED their relay teams into the finish. Individual events generated none of this kind of enthusiasm and excitement. The relays were the thing. They brought us together as a team and gave us the chance to be heroic.

I love relays because they bring out the absolute BEST in us. They take us out of ourselves and BEYOND ourselves, to accomplish something that none of us could do on our own.

It’s this love of relays that led me to an event called Reach the Beach (RTB) Relay. RTB is a two-day, 208-mile adventure relay race that starts in the middle of New Hampshire’s White Mountains, and finishes at Hampton Beach State Park in Portsmouth, New Hampshire. I ran the race in 2003, had a blast, and this year wanted to put together a team comprised mostly of swimmers, and with the team name of Go Swim. I thought it would be kind of cool if we all reached the beach and then went for a swim. Little did I know…but I’ll get to that later. 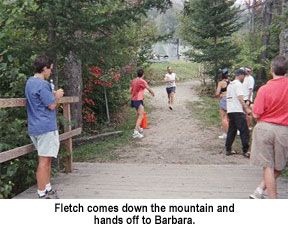 The RTB racecourse is comprised of 36 segments or "legs," that cover a variety of terrain and difficulty levels, ranging from fast and flat to steep and winding (mostly steep and winding). The legs range in length from 3.1 miles to 8.8 miles.

Runners generally compete in teams of 12, rotating through the legs as they cover the 208-mile course. On a 12-person team, each team members runs three times, for a total of 16 to 20 miles, depending on where you are in the lineup. Our team did the typical thing of dividing into two vans. The runners in Van #1 (a black Suburban for team Go Swim) complete the first six legs of the course as the runners in Van #2 (for us, a 12-person Thrifty rental van) travel ahead and rest. When Van #1 finishes its six legs, Van #2 takes over and Van #1 drives ahead to eat and rest (sort of). The vans leap-frog like this through the night and into the next day, until all the legs are completed. The race starts on Friday morning and finishes the next afternoon. The fastest teams do it in about 20 hours; the slowest in 36.

The hardest part of the race (or so they claim on the RTB website) is to get 12 runners to the starting line. My goal was to have a team of all swimmers, and we came pretty close. From my hometown in Ohio, I recruited long-time swimming buddies Reggie, Pam, and Patrice. They’re the kind of crew that chooses a new adventure every summer, whether it’s swimming 17 miles across Lake Chattauqua, or taking the Alcatraz Challenge, or running a marathon. From my Masters swim team in Lebanon, NH, I recruited Leslie, Dave, and Chris, all of whom are triathletes and runners. From the Adirondacks, I recruited Emily, a rock-climbing guide who did the Lake Placid Ironman this summer. From Boston came triathlete Steve. From out of the clouds we snared Fletch, a veteran of the Appalachian Trail and other mountaintop hikes. And from Vermont I recruited Michelle, who did the race last year, and Michael, one of those guys who enters 100-mile trail runs just for fun. 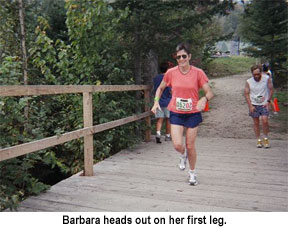 We had our 12 runners…up until the day before the race, when one of them had to pull out because of an Achilles injury. After 24 hours of FRANTIC emails and calls to all our running friends (you don’t want to do this race with fewer than 12 runners, believe me), we finally found another runner — Courtney, a swimmer on my Masters team. Actually, we held her under water for several minutes until she "volunteered" for the role of Runner #12. (Courtney, I owe you a big one!)

The race started under perfect conditions in the breathtakingly beautiful White Mountains. Fletch, our mountain goat, volunteered for the first leg, which is 3.1 miles straight up (and down) the fall line of a ski slope at Bretton Woods. When he came back down the quad-busting slope, Fletch handed me the wrist-baton, and I took off on Leg #2. Everything went fine as our van completed the first six legs of the course. It was only as Van #2 got going that Hurricane Ivan caught up with us. The weather forecast had said 30-percent chance of showers. It started to rain at about 4 pm. And it rained. And rained. And rained. It rained all through the evening. It rained all through the night, as the race wound its way over the rural and mostly unlit roads of New Hampshire. It rained all through the next morning and halfway through the afternoon. But the crazy thing was that the rain, which would have driven us inside and under the covers had we been on our own, didn’t matter. We were a relay — a team of twelve with a mission to reach the beach — and it would take more than a 24-hour downpour to stop us.

And we weren’t alone. In the back of our minds were thoughts of the Gulf Coast residents who endured Ivan’s FULL fury. This was bad, but nothing compared to what they had gone through. All around us were teams of other wet runners who shared our goal. We inspired each other to keep going. By midnight, the transition areas had become seas of mud and steamy-windowed vans. Forget pitching a tent or sleeping in the gyms or churches that were available to us. It was easier and drier to sleep sitting up in the vans. We were six wet and tired and increasingly smelly runners, trying to get a few hours of sleep before running another hilly leg in the dark and pouring rain. We made a pact of NO WHINING ALLOWED, but it was really unnecessary. We were a relay.

As the hills and rotations — and rain — kept coming, our spirits never flagged. Quitting was unthinkable. Complaining was unthinkable. If it was your turn to run, you just got out of the van and ran. If one of your runners needed water, you drove a few miles ahead of them, got out, and waited in the rain for them with a water bottle in your hand — because you knew they’d do the same for you. Most of the people on Team Go Swim didn’t even know each other when we started the race. By the end, we were fast friends who would do ANYthing for each other. We were a relay.

It wasn’t until our final runner reached the beach in Portsmouth, that a ray of sun broke through the heavy gray clouds. As Courtney approached the finish line, we all joined hands and hobbled together through the final yards of our 208-mile journey. (What could be sweeter than a relay where everyone gets to touch the wall at the same time?) With the wind-tossed Atlantic Ocean straight in front of us someone asked, "B, do we HAVE to go in?"  "You must be joking," I said. "We’ve been swimming for the last 100 miles." 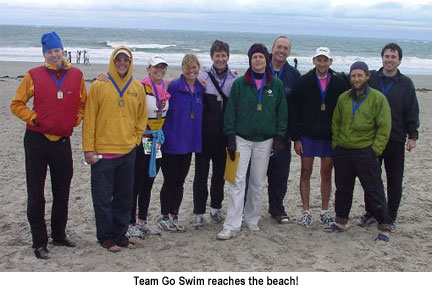 I could go on and on about what a tremendous experience this race is — about the hundreds of acts of kindness and camaraderie that I witnessed — about how the race and the conditions inspired every competitor to push his or her limits — about how each of us somehow performed well beyond what we thought was possible. I think that, as adults, we get far too few chances to participate in this kind of event. Every once in a while, we all need a relay to reawaken ourselves to the concept of team effort. And to show us what we’re capable of doing.