Pull up to any McDonald’s and you’ll hear… "Would you like that Super-sized?" Most of the time, without thinking, you automatically say, "SURE. Why not." Of course, let’s not get into all the nutritional aspects of that, I don’t want to talk about it.

What I REALLY want to talk about, is the Super-Sized week we had last week. We attended the ASCA World Clinic in Indianapolis, Indiana, and there just happened to be a swim meet in town at the EXACT same time. It’s almost like they planned it this way. The meet was the World Short Course Championships. Short course is ALWAYS an exciting meet, and the organizers went ALL out this year to create a swimming extravaganza. Indianapolis is one of the swimming-est cities in the world, and they already have a fabulous pool at IUPUI, but the organizers had a dream that went beyond even that super-sized facility. They set their sites on the Conseco Field House, which is an enormous basketball arena and home to the Indiana Pacers. What a concept! A swimming meet in an NBA stadium with spotlights, flashing scoreboards, surround sound, and seating for THOUSANDS of fans. But how about a pool? No problem. They built one (actually two, if you count the 25M warmup pool) from scratch in the center of the arena.

Here are just a few of my SUPER-SIZED impressions from last week.

FIRST… the ASCA Convention. WOW… a SUPER-SIZED number of coaches. Close to 1,200 coaches from all over the world. By the 4th day of the convention, I really felt like we had met EVERY one of them. Our feet were killing us, our mouths hurt from all the smiling, and our stomachs hurt from all the laughing. As usual, get us around a bunch of swimming people, and we’re just going to have fun. 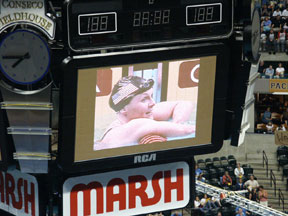 SECOND… A couple of thanks have to go out… Guy, Jason, and John from ASCA…they’ve really supported our products, and we really appreciate it. Matt at TYR for including us in the great get together the first night. It was SUPER(sized). Mark at Colorado Timing for using our DVDs to showcase their 20-foot display board. ALL our friends at Zura, Paul, DJ, and Bernard… WINGS! Chip, Patty, and Bob at Kast-a-way… you HAVE to check out the new Bobble-heads. Evan, Bobby, and Josh at PMG. Bruno at swim2000 kept us all jealous because he got Lenny in his booth for a while… we kept waiting for him to send him down, but…. Nice traffic builder there, Bruno! Craig at Lane Gainer was right next to the Go Swim booth, and we just watched as he put kid after kid through a stretch-cord routine on his new bench. Nice way to win some new fans! We say thank you to good friend Pat, who kept us up to date on all the presentations that we missed. Thanks to Jeff, who came by the booth after a long day of technique clinics and autograph signings. And of course we want to thank all our friends at Sports Publications — Brent, Phil, Mike.

The convention was great for us, simply because we met so many new friends. We met some OLD friends too, people we have known on the discussion board for quite some time, but actually met in person in Indy. Avacoach, AKF, and I also found out that Daggi is a National Team Coach. He’ll try to downplay it, but I think it’s awesome. (Hope I didn’t give anything away there, Daggi). 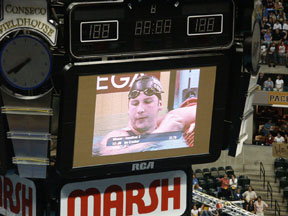 The meet was also really cool. Check out the pictures of the swimmers on the SUPER-SIZED screen that hung above the pool. The screen was a great addition to the meet, because it allowed you to see each event in several different ways — because they had cameras EVERYWHERE. You’d see the swimmers in real time, but the big screen let you see the action from under water, overhead, head-on, and close up. And the instant replays were awesome. The only thing…I know they couldn’t be expected to move this huge screen for the swim meet, but I’m not quite sure that having this HUGE, ELECTRIFIED TV screen hanging over the pool is actually to CODE!

I think next time, they should hold the entire convention in a pool. I may end up looking like a prune by the end of the week, but at least my feet won’t hurt so bad!

My advice to any of you who happen to have this convention or swim meet come anywhere close to you is…GO.

Did I drop enough names in this article? Sorry, I just had a really good time.