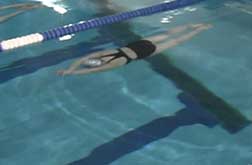 This past weekend we had a chance to hang with some old friends in the best place to do it, on a pool deck. The New Jersey mini clinic was a get-together of old pals. So Glenn and I packed up the truck and hit the road. Mr. Blue made the trip with us as well. Some of you might remember him from the Coach Black posts last season.

It is great to see your swimmers succeed in the sport, but it is the ultimate when you get a chance to work with them on deck. This is the second mini clinic that I have done with mr. Blue in as many weeks. He is a great presence to see on deck, and has already added to my knowledge and has changed the way I think about some of the things I told him when he was in the water and I was on deck. Mr. Blue has a much better understanding of what I was trying to say for the past few years, because he had to do it. It was a great experience to see him explain things to others in his own words. 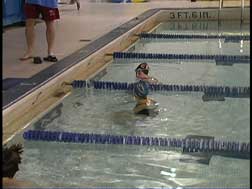 First stop was at Don Walsh’s house for fresh bagels. Suprisingly, Don had an ear-to-ear smile when he greeted us. Then we went in to Don’s garage to check out his Vet, and his smile got bigger. After we picked up Don, our next stop was Monmouth University’s pool.

The purpose of the clinic was to help some of the swimmers whom we worked with in our summer camps. As soon as we got there it was like we had never left camp. We were greeted by a parent who was instrumental in helping us get the Monmouth University pool. She towed two of our more bubbly clinic participants across the state of New Jersey to work with us. We also had clinic participants from New York and Pennsylvania.

The first 15 minutes was a general warm-up in which we introduced the details that each swimmer would focus on for the next three hours. Then we broke into three groups and went into station work. Each swimmer got the individual attention that he or she needed, as well as getting video analysis of all four strokes.

The funny thing was that three hours just wasn’t enough time. We could have gone six hours without anyone flinching to look at the clock. Being on deck with great people and having attentive ears and eyes in the water makes time stop. It was the place that was so natural for me, and that I am looking forward to duplicating over and over.

Thanks to everyone made last weekend possible: Glenn, Mr. Blue, Don, all the parents, and of course the kids. If it weren’t for the kids, none of us would be doing this. I am looking forward to seeing everyone again, and to holding more of these clinics in other parts of the country.