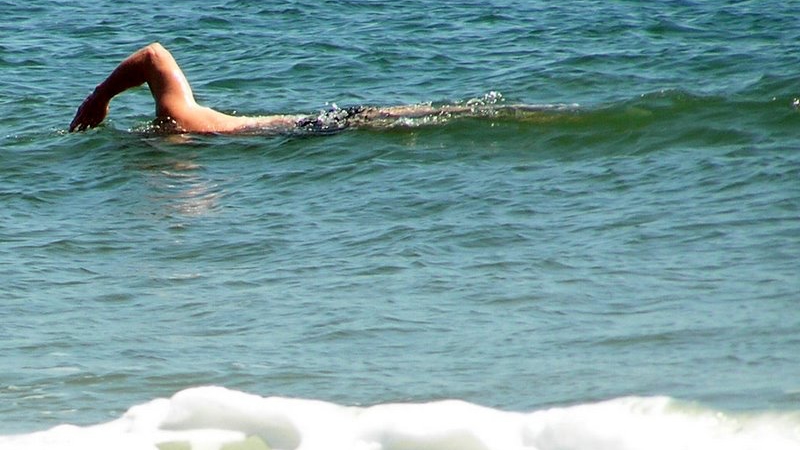 Don is our longtime friend and creator of the Combat Sidestoke Course on GoSwim.tv.  Don has spent the last 20 years mentoring more than 7,000 SEAL candidates get ready for the swimming side of their training.  We figured publishing this in the heat of the summer would help us look forward to winter!

When others head for the mountains and skiing, I continue to enjoy the ocean even though the water temperatures drop into the mid to lower 30’s. I grew up on the Jersey shore and spent as much time as possible enjoying the ocean every summer. I tell people that I’m so comfortable in the ocean that when the earth’s surfaced cooled, I swam ashore. Few have a greater love of the ocean than me. So when Laura Lopez-Bonilla, my good friend from England, told me that she was going to swim through the winter to prepare for her first Channel crossing, I told her that I would join her on the other side of the Atlantic. Although I have swum in the China Sea, the Sea of Japan, the Pacific Ocean, the Gulf of Mexico, the English Channel, Atlantic Ocean, and the North Atlantic all my swimming now is in the Atlantic Ocean. Throughout the winter, we’d e-mail one-another with the times we spent in the ocean (in England, they call it the sea). What I found to be amazing was how closely our water temperatures were even though we were on opposite sides of the Atlantic. It was a great way for me to share in her Channel swimming experience.

That’s how it all began … not on a dare or even by losing a bet, but sharing a love of the ocean with a good friend from across the sea. Laura and I continued to swim through the winter for several years, and she has swum the Channel both as a solo and on relay teams.

Since then Laura, definitely the smart one, has stopped swimming through the winter. I, on the other hand, have continued to find it enjoyable both swimming and bodysurfing through the winter, so I’ve continued to do so and now my monthly streak has reached 216! I’ve now been swimming in the ocean two to three times a month off the Jersey shore for 18 years. When I tell people that I’ve been swimming in the ocean for 216 months in a row, the most common question I get is … Does that mean that you swim in Dec, Jan, and Feb?! Yes, even through the winter months of Dec, Jan, and Feb!

Now I don’t recommend this for any normal person and you should never go in the ocean alone. I always have someone on shore when I’m swimming, my son is an ocean lifeguard, so he serves as the perfect observer. And I always go at low tide and swim in waist deep water, so if there’s any need, I can stand up and walk back to the beach. Plus I keep my swims short during the winter months and build on the times as I swim through spring. Also, I always have something to eat before going as it helps to prevent hypothermia, and I always have dry clothes to put on when I get out of the water. That way I don’t have to stay wet and cold on my ride home.

For the past 20 years, I’ve been mentoring SEAL candidates and I tell them to get comfortable in cold water. The water temperatures off Coronado Island where they go through BUDS is cold even during the summer. They will have a huge advantage over their peers at BUDS if they are comfortable in cold water. The candidates from New England and the northern parts of the country grew-up swimming in cold water, either in the ocean, lakes, or rivers. The candidates from the southern parts of the country never get to experience cold water. Even during the winter months, the water temperatures in Florida aren’t even close to Coronado. I recommend that they take cold showers or cold baths in order to get used to being in cold water because they are going to get plenty of that at BUDS!

Over the years, I’ve taken SEAL candidates swimming off the Jersey shore in preparation for BUDS. I take them swimming in the ocean up until the beginning of Dec and start them again in May when the water temperatures are in the low 50’s. Typically the water temperatures off Coronado Island range between 50 degrees in the winter to 60 – 62 degrees in the summer. They feel that if they can handle 50-degree water in New Jersey, then the 50-degree water off Coronado Island won’t be so bad. If you’re familiar with cold water even a degree or two can make a big difference. Believe me, all the candidates have been very grateful for their cold water immersions in New Jersey.

In preparation for my 41.5-mile swim around the Isle of Jersey in England, I tried to eliminate all the surprises that I could, but I didn’t do as well as I had hoped. One of my biggest surprises happened on the way out to Elizabeth Castle in the middle of the harbor where my swim was to begin. Like the Channel swimmers, I planned on applying five pounds of Vaseline and Lanolin to cover my body in order to keep me warm during my swim. As my son, Sean, applied the greasy mixture my boat captain asked what he was doing. I told him like the Channel swimmers, I was going to apply five pounds of grease to keep me warm during my swim. He said, “No you’re not!” My captain, Charlie, then explained if I were to cover my body with grease, he wouldn’t be able to get me back on the boat after my swim. As some of you know, I’m a swimmer trapped in a middle linebacker’s body, so it was going to be a difficult task to hoist me back on the boat even without the grease. My only response at the time was … OOPS!!! When I jumped into the sea long before sunrise to start my swim, my only thought was … GEESH it’s cold!!! Then I thought, I can do this! I swim in the ocean all winter long!!! HECK, it’s not that cold! I touched the massive breakwater on Elizabeth Castle and started swimming. Ya know what? I didn’t think about the cold water for the rest of the day!

I’ve never had a goal in mind as to how many months I wanted to swim through the winter, but like the ocean races that I’ve competed in over the past 40 years, as long as its fun I’m going to continue doing it. Plus I have so much fun teasing the guys at the club about the perfect waves they missed the day before! Why wait until summer to enjoy bodysurfing?! Plus I always get the best parking spots and I can put my backpack anywhere on the beach!

Surf’s up all winter long! Any takers?