For the New Year, we wanted to give you a new feature. In addition to the Drill of the Week, we will now offer a "Pic of the Week." This will be a single image, with no caption or explanation. Sometimes it will be a famous swimmer, but sometimes it will be a soon-to-be famous swimmer. The poses that we show may not always be the "usual" swim shots we’ve come to expect in swim magazines or even on our website. We want the Pic of the Week to be something that makes you THINK. And it will be up to YOU to determine the meaning of the image.

We believe that each aspect of swimming can be interpreted differently by each swimmer, based on his or her age, ability, physiology, goals, and expectations So, rather than have US tell YOU what to think…we want YOU to tell US what the picture means to YOU.

We’ll launch this new feature with one of my favorite shots. It’s Jeff Rouse, photographed from the bottom of an 18-foot diving well. With that…have at it! 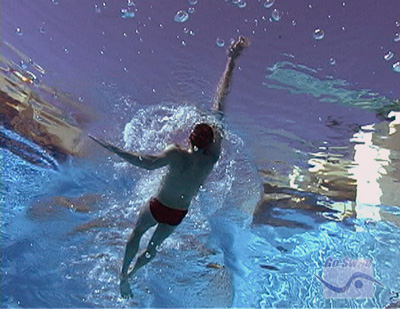