Watching the news each night, I get more and more frustrated by…well…HUMANS. It seems that, increasingly, HUMANS are so caught up in success that they’ll do anything, and take any short cut, to achieve it. Business ethics are driven by "The Apprentice"-type of tactics, which put profits ahead of service. Personally, I’d like to see "The Don" teach his apprentices that the sale is just the beginning of the relationship, not the end. 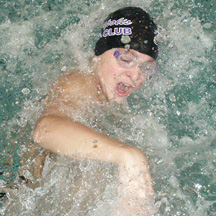 I’ve been involved in swimming for a long time, as both competitor and coach, and I’ve seen and experienced a direct relationship between work…and reward. The link was always pretty direct: The harder I worked, the better I competed. The harder my swimmers worked, the better they did in races. I’m not talking about working for a day or two toward a short-term goal. I’m talking about making a personal commitment to a long-term goal, and working toward that goal over weeks, months, and years. After I had swum for a few years, it was evident that time ran out very quickly each season, and one season built on the next. In order to succeed consistently, I had to make sure that I worked EVERY season. As a coach, I try to make sure that all swimmers I work with understand that each day affects the next, and each practice affects the next. You can’t be committed for a day or two, and then slack off. The work has to be consistent. There are no short cuts.

Setting long-term goals and steeling yourself to work toward them is no easy task — especially if you watch a lot of nightly news broadcasts. The news is filled with stories of individuals at high levels of government or business or athletics who seem to have forgotten about ethics, integrity, and the direct relationship between work and reward. The news is filled with people who take short cuts. 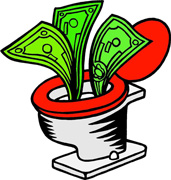 For example, this week I learned on the news that the FBI paid $170 million to a company to create a computer system…and the system didn’t work. What happened? When the company bid on the project, did they know whether they could actually deliver a workable system? Did they even know if such a system COULD be built? Could it be the case that they KNEW the task couldn’t be completed, but decided to grab the bucks anyway? I’m just guessing here, but the whole situation makes you wonder. In business, we’d be held accountable for not completing that task, and we’d have to continue to work until it was done, or give a REFUND! Why does it work differently when the government is involved? 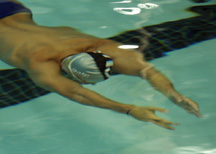 Over the past few years, I’ve been fortunate to work consistently with a few athletes. Each day, we work on specific skills, and it’s a very common aspect of our training to — start again. If something is not done correctly, it must be done again until the task is completed CORRECTLY, not just completed. One of these swimmers, has just broken a state record in the middle of the season, and is looking for huge drops over the next month. He expects it because he’s applying himself every day!

And while I’m on this particular rant, I have to say that I’m disgusted by major-league baseball (lower case because I have no respect for it). Top-league baseball players are among the world’s most talented athletes. We can only admire and marvel at their reflexes and skills. But I believe that the new steroid policy put forth by the people in charge of major-league baseball is a JOKE! What kind of a threat is "FOUR strikes and you’re out?" What kind of a message does it send to kids to establish a rule that says you can cheat for a while, sit out for a while, cheat a little more, sit out a little more — all the while, making obscene amounts of money, which would have the ability to soften the pain involved in the wait for the ‘roids to leave the system. Come on! The records of the past are being overturned by guys who are CHEATING! CHEATING! And the answer from the league is to allow them to continue to play until they’ve been CAUGHT FOUR TIMES! Even then, they’re not done. They just have to sit out another year.

Don’t these guys know that KIDS are watching? Don’t they care? Don’t they know that nearly every other sport is STRUGGLING to remain clean, and struggling to establish uniform rules for drug testing and punishment for drug use? The baseball higher-ups seems to be telling us that the shortcut of drugs is OK and nothing to get too excited about. DON’T BELIEVE THEM! Using drugs to get to the podium compromises not only your integrity, but also the integrity of the entire sport. Our sport needs tougher drug penalties, not more lenient ones. We need more testing, not less, and we need more consistent testing and penalty guidelines, not less. And I hope that swimming officials don’t take any cues from the higher-ups of baseball.

At this time, our sport is still very pure, and offers a fundamentally sound activity for thousands of kids and adults. Swimming teaches us that we’re responsible for our success and failure. It helps us develop a strong work ethic, and gives many opportunities to show good sportsmanship. It teaches us how to behave in the "real world." In swimming, as in most of life, there are no shortcuts to success. You can’t fake…or lie…or cheat…your way to success in swimming. You have only yourself to blame for failure, and you get all the credit for success.

Our sport can change the world by teaching our youth that the more integrity they have in their training, and in their day-to-day life, the more success they’ll experience. Funny how that seems to hold true in the rest of our lives, even if we are surrounded by people who take short cuts. We can either complain about it, or try to change things by teaching better values. I choose the latter.