When you grow up in Michigan and Ohio, snow is something you get used to. But you can get used to living without it, too. For example, I have really enjoyed living in (mostly) snow-less Maryland. It has been a mild winter, and up until a few weeks ago, I’ve felt like I was living in the SOUTH. 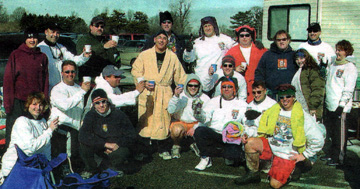 Then, just as I started to feel confident that I’d be wearing flip-flops and shorts all year, a change in the wind came through. The weather started to fluctuate between days in the 60s and days in the 30s. Then, in mid January, the weather really took a turn. How did I know this was going to happen?

For the last three years, at the end of January, I’ve taken part in the Polar Bear Plunge to benefit the Maryland Special Olympics. The first Plunge was fun. And I learned a very important lesson: Take extra shoes! Before the plunge, I stood on the beach for 20 minutes, waiting for the speeches to end so that we could sprint into the freezing cold water, jump up and down a couple times, then sprint out. Only, by the time I got in, my feet were already so cold that they just went NUMB. On my way out, I realized I could barely feel them any more. THAT wasn’t going to happen again. For the second Plunge, I had extra shoes, but learned a very important lesson: Take extra clothes!

Last Saturday was my third January jaunt into the Chesapeake Bay. In the two weeks before the Plunge, I had driven daily across the Bay Bridge, watching ice take over the water bit by bit. Waiting for the thaw that never came, I kept trying to think up legitimate excuses for why I couldn’t POSSIBLY do the Plunge this year. It occurred to me that I did the exact same thing LAST January. I thought that maybe my recent head cold would get me off the hook, but on the morning of the Plunge I saw the look of shame on my daughter’s face when I said I probably wouldn’t be going due to the sniffles. I started to get dressed…WARMLY.

Two pair of socks? HA…not a chance. Try FOUR! Two for standing in the cold sand, and two to put back on AFTER I got out. An extra pair of shoes? Try TWO…just in case I had a blow out on the way out. Shirts? I lost count at four. Two pairs of sweat pants for easy off at the last second, and easy on after I was done. Enough towels so I could stay warm before, and spread one out right after so I could sit and get dressed again without dragging too much cold sand into my pants. 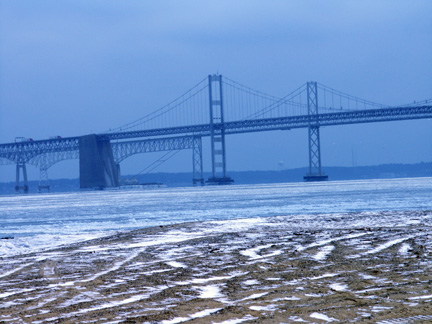 Why all this preparation for 20 seconds of an event? I committed to do it. Of course, I should have thought through it a bit more. I had friends and family mad at me for doing it because I’d been sick the past couple weeks, and everyone keeps reminding me how old I am. 🙂

But the way I look at it is simple. Sure, it’s fun to get together with my friends who do it, BUT…the cause is more important. Is the 20 seconds of SHOCK really that bad, or does it also WAKE us up to those who need our special attention? Balancing working in a small biz, volunteer coaching day and night, meeting family commitments makes it very tough to give back to these special communities that need our help.

The way I see it, for 20 seconds of dodging ice and people scrambling back to shore, I’ve stayed involved, and given something back, even if it’s just a little. The freezing cold water makes you pay a price in awareness, but it also reminds us that the world doesn’t revolve around us, and we need to be involved with others.

Next year, I’ll moan, complain, look for excuses, and pray for warmth. But I’ll end up jumping in the Bay with the other nuts. We’ll yell, scream, jump up and down, and have our warmth on the inside ’cause we’ve done something good and valuable.

Besides, when it’s all said and done, the Plunge lets me complete a swimming event in 20 seconds — a definite all-time personal best. I NEVER had a race that lasted only 20 seconds. Next year, I’m going after Roland Schoeman!