It’s that nerve-wracking time of year again. The time when coaches and swimmers want to get everything just right — and ponder whether every lap and every set is too much or too little. Here are some ideas on taper from the swimmer’s perspective. 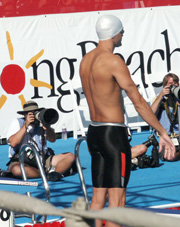 Taper time is an exciting, nerve-wracking, and frustrating time of year for swimmers. It’s exciting because the end of the season is near, you’re about ready to let it all go, and RACE. It’s time to put it all on the line, and see if all that work you’ve put in all season, is about to pay off. It’s nerve-wracking because no matter how many times you’ve trained, tapered, and raced in the championship meet, there is still some uncertainty about what’s going to happen. You lie in bed at night, remembering the missed practices, the one-handed turns, the poor swims during the season, and wonder if any of that will make any difference NOW. Finally, it’s frustrating at times because as you go through subtle technique changes that occur with the extra rest, sometimes it all starts with you going SLOWER in practice, rather than faster.

I didn’t mention how you’ll also be feeling a bit euphoric as well. You’ll have all kinds of extra energy, and you may find yourself bouncing off the walls! 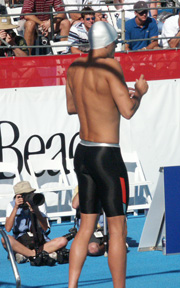 Step one in handling taper is…never panic, and never question what you’ve done. It’s too late to go back, so focus your attention on the things that you HAVE done to accomplish your goal. Chances are, you’ve put in SO much work that the few things that went wrong, or that you missed, aren’t going to matter. Don’t get me wrong. NOTHING prepares you for the end of the season better than knowing you’ve made all the practices you had to. But you have to look at the positive side of things, and add even more focus to what you’re doing TODAY!

Step two in handling taper is to understand that nerves are natural, and expected. It’s GOOD to be nervous. If you’re NOT, then you’re the one who SHOULD be nervous. Waking up in the middle of the night with butterflies in your stomach means you care about what’s going to take place in a couple weeks, and it’s best to practice some relaxation techniques, such as deep breathing, and trying to think of peaceful thoughts. 🙂 Just relax and reason with yourself. There’s NOTHING you can do in the middle of the night to make you swim faster, EXCEPT…sleep. 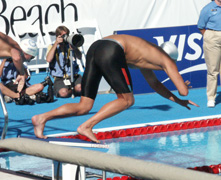 Step three (and by NO means is this a comprehensive article on taper; it’s more like a short reminder note) is to get used to your new, tapered body. As you begin to rest, your arms, legs, and body…begin to move a bit quicker than you’re used to. It takes a few days for you to get used to the quickness that’s been trained out of you over the past few months. It’s totally normal to feel BAD in the water. It’s common to swim poorly for a few days, and even right up to a day or two prior to the meet. Heck, I had championship meets where I hadn’t felt good until the actual race. Talk about mentally stressing! Those warm-ups are very trying on your psyche, but you’ve come too far to not believe it’s all going to come together. Trust yourself, and don’t accept that you’re going to be anything less than stellar when you climb onto the blocks.

Finally, we’ve all got quirks during taper. My brother used taper better than anyone I’ve ever met. My favorite story (and every swimMom and swimDad is going to kill me for this one) was when my Mom asked my brother to shine his shoes about a week before Senior Nationals. He replied, "I can’t, I’m resting." Talk about taking it to the extreme. But this was the beginning of my lessons in how to walk, talk, and chew gum during the last couple weeks of the season. I did everything slower, conserving as much energy as possible, even to the point of watching where each step would be placed so I wouldn’t turn an ankle. Nuts? You bet. I didn’t have many friends cause nobody wanted to be seen with the weirdo who looked like he was mumbling to himself walking home from practice (college)… but I usually swam pretty well at the end.

Just be smart, and don’t freak out. Have a good time with it, and trust that you’ve done all you could’ve done up to this point. Because in reality…you have. Right?