One year ago I posted an article called "Coach B’s Theory of Relativity Or…What I Learned from My Students This Semester." In the article, I described my teaching experience with an eleven-year-old boy who’d never learned to swim because of a fear of putting his face in the water. I said that this young man taught me something new every week. Indeed. Here’s what I wrote about my first few lessons with Aaron: 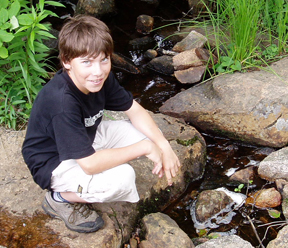 Fear of putting the face in the water doesn’t equal fear of the WATER.   It was clear from the first minute of the first class that this kid wasn’t going to put his face in the water (at least during the first session), so we explored all the stuff he COULD DO short of putting his face in. I towed him on his back. I talked about balance and head/eye position. I had him kick on his back while holding a dumbbell flotation device. We did vertical kicking in the deep end with the dumbbell (for some reason he had no fear of the deep end and could paddle around OK as long as his head was above water). We put on fins and did all of this stuff again. Fins were a revelation for him.

Sometimes, when you think you’re getting NOWHERE, you’re making progress on an entirely different level.  This kid didn’t say more than three words during our first lesson. I didn’t think I’d gotten through to him at all. But his mother called and said he came home totally excited and wanted another lesson. Go figure. Sometimes less is more. I think part of it was that I didn’t push him to put his face in the water. He didn’t feel threatened.

Fear of putting the face in the water is usually caused by a lack of breath control.  At lesson #2, we started to blow bubbles with eyes and nose out of the water. I could tell he wasn’t thrilled, so I let it go and we went back to doing all the stuff he COULD DO. More kicking. More balance. More FINS. More progress. Toward the end of the lesson I tried the breathing thing again. We got to nose in, then goggles in while blowing bubbles. Then, I asked him to take a deep breath and see how long he could take to exhale all his air – with just his nose under water. We turned it into a contest – 5 seconds, then 10 seconds, then 16 seconds. Then we kept the contest going with goggles under the surface. Sixteen seconds again. He was gaining confidence and breath control.

Go slow.  Make sure there’s something that the student can master and feel good about at each lesson. End the lesson with it if you can. And it doesn’t take much. This kid went home from lesson #2 elated and charged up to come back to the pool. On the 4th lesson, he even brought his older sister so she could see him doing 6-Count Backstroke.

Everything is relative.  If you’re one of the lucky people for whom swimming came naturally, it might seem like this young man was making very slow progress. But to him, every lesson brought HUGE gains in self confidence and aquatic skill.

OK…That was my report from one year ago. After several more lessons with Aaron, his Mom called me to ask if I thought it would be possible for Aaron to progress enough to earn his Boy Scout Merit badge in…SWIMMING. It was a dream of his and did I think it was possible? I try not to make a habit of discouraging people from their dreams, but at the time this seemed like a pretty wild one. After all, this was a kid who had just learned to put his face in the water, and still wasn’t too happy about it. I gulped, and said I’d have to get back to her.

After checking the BSA merit-badge requirements, I was even more dubious. Let’s see… Jump into deep water, swim 150 yards without stopping using free, back, breast, and sidestroke. Remove shoes, socks, jeans, belt, and shirt in the water and then, while treading water, tie knots in the pant legs and use them for flotation. Sure. No problem. The idea of Aaron being able to do those things seemed, well, like a dream. But something about this kid made me believe maybe he could do it. "I think it will take a lot of lessons," I told his Mom, "and the only time I have available is Tuesdays at 5:45 in the morning, but if you and he are willing to do it, I’m willing to help."

So week by week, lesson by lesson, Aaron and I began chipping away at the requirements. By spring, he was swimming a pretty decent freestyle and backstroke and jumping off the side into 12 feet of water. By early summer, he was doing a legal breaststroke kick on his back and I introduced him to body dolphin with fins, which he loved. By the time the Athens Olympics rolled around, Aaron was swimming body dolphin breaststroke and a butterfly that didn’t look exactly like Michael Phelps’s but that was good enough for him to do a 100 "IM" with fins, just like the guys on TV.

The treading-water-and-floating-on-your-clothes requirement was perhaps the biggest challenge. We tried it once and gave up because his treading wasn’t strong enough and we couldn’t get the pants to fill up with water. A few weeks later we tried it again and, through sheer determination (and by staying totally calm and relaxed) he managed to tread water for 35 minutes and fulfill all the parts of the requirement.

By January 2005, Aaron was perfecting his long shallow dive, and was swimming up to half a mile at each of our pre-dawn lessons. He snorkeled in the deep end of the pool to fulfill yet another requirement. I suggested he join the summer swim team, but, no, The Badge was the thing he wanted. Finally, on February 3rd, nearly 16 months after Aaron’s first lesson, I signed the slip of paper that said he had completed all the requirements for the BSA Swimming Merit Badge. Through great determination and dedication he had reached a goal that once seemed totally out of reach.

When I handed Aaron the magic slip of paper, he handed me a thank-you note that said "Thank you for teaching me how to swim because there’s going to be times in life where I will need these skills and times that I will use these skills to save someone’s life. " Well, you can guess which Badge we’re working on NOW.

Congratulations, Aaron. I know you will reach your new goal of Eagle Scout!