I recently had the pleasure of dealing with a corporate call center and now have a new understanding of what it means to be in customer service. What follows is the true account of my dealings with a major TV service provider whom I will call "Dish N*twork." I am an idiot for not seeing the writing on the wall.

A month and a half ago I moved into a new apartment. After an exhaustive review of the available DSL/TV/Phone services, I concluded that the anonymous TV provider Dish N*twork would be the best for the price. I don’t watch that much TV, and what I do watch is usually on Comedy Central, ESPN, the sports networks (including FOX), and the news channels (to stay current on the obscure diseases, crime schemes, and world crises that I need to worry about). The last one was a joke; I can’t watch the news since HST has passed.

On installation day I stayed home from work to wait for the installer. Eight o’clock came and went. Nine o’clock came and went, but still I waited patiently for that sweet sweet electronic joy that comes from going mindless in front of the tube. Ten o’clock. Eleven. Still waiting. Still patient. At 12:30 there was a knock on the door. ‘A little late,’ I said to myself, but no problem.

It was the least of the problems. The installer had no mention of a tripod on his work order. I said that’s odd, because I had told the customer service rep that we would not be able to do an installation without a tripod. The installer said he could do a temporary fix and get me TV until the next guy came back to hook up the tripod. So he went about his business and was very good at it. When he got to the final step, which was installing the receiver, I noticed that it didn’t say DVR anywhere. I asked and he told me that the work order was for a 501 (a non-DVR) receiver. I had discussed the need for a DVR receiver with the customer service rep. At least the rep was consistent — no tripod, no DVR receiver.

The installer assured me that this wasn’t a big deal because he would have to come back next week to hook up the tripod. The 501 receiver would do just fine as a temporary fix. Or so he thought. When he called corporate headquarters at the anonymous TV provider Dish N*twork, they said that once I agreed to their service, I would be stuck with whatever equipment they gave me. If I wanted the equipment I had ordered, I’d have to wait until they brought the right stuff next time. So…the installer had to undo everything that he had spent the last hour doing, and he was the one left looking like an idiot.

At the conclusion of Installation #1, Dish N*etwork apologized and assured me (as in a "promise") that they would have everything set for a week later.

My girlfriend volunteered to do the waiting this time. What could go wrong? The customer service rep had "promised" that we would be the first appointment of the day. The serviceperson had already been to the house. The company knew that the dish needed to be on a tripod and that I needed a DVR unit.

At 2:00 pm, after 6 hours of waiting, my girlfriend decided that her own work and clients were more important than waiting for the Dish N*etwork installer, and she left the apartment. 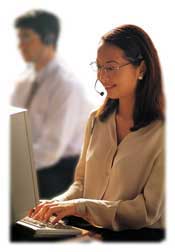 Don’t ask me why, but I called Dish N*etwork to set up Installation #3. To compensate us for two days of lost work, the customer service representative gave us a free month of service. So for waiting 12 hours, we earned a $31 credit. Never mind that we still didn’t have the service for which we had already been billed. We had a credit! And we had the word of the customer service agent that Installation #3 would go smoothly. Installation #3 will be gold, I could feel it. Third time’s a charm…three strikes and you’re out…all that good jazz. How could it go wrong?

I took the third shift. I figured I could use the DSL hookup to get some work done, surf the net, check out some ESPN.com, sift through my junk mail, then cruise over to the office by 10 am, tops. After getting to the bottom of my junk mail, and finding out that the Bills did not win the last Superbowl, I realized that it was 11:30. No installer. Then, like a knight in a beat-up white van with giant Dish N*twork decals on the side, he arrived. I didn’t waste time on pleasantries. Did he have the equipment to mount the dish on a tripod? And did he have the right receiver? One out of two. He had the receiver but there was no note about a tripod installation. His solution was to run to the local Home Depot, but he must have gotten lost. When he returned, it was 2:30. I called the office to say I wouldn’t be able to make it in. It then turned out that he didn’t have the parts to do the installation, but he could put the dish on cinder blocks in the backyard. A fourth installer would be back to sink the dish into the ground.

Installer #3 went about his business, hooked up our temporary super-trashy fix, and went on his way. Before he left he showed me around the channels and I noticed that the local channels weren’t working. There’s no way they couldn’t get this right, I thought, so I took the installer at his word when he said the system was simply downloading the channels. Wrong again. The channels never downloaded and I missed Illinois losing to Ohio State. Plus the receiver that was left was not the right DVR; it was the 510 not 522. I actually know all the lingo of the anonymous TV provider Dish N*twork installer.

I could deal with not watching Illinois lose to Ohio State. But March Madness was about to begin and I wasn’t about to miss it. I got on the horn with my customer service reps for some more talking. I felt that we were developing a special bond and could break through the corporate jargon and get down to it. Customer service agent # (I forget ’cause I had talked to 15 people already) assured me that, yes, I would be the first one taken care of on installation date #4. To make up for my loss of time I was comp’d another free month. I was making headway. After only three days of missed worked and a fourth looming, I was up to $62 in free service.

Installation #4 is bound to work, I reasoned. It is a nice even number. I like sets of four in swimming — 4 laps in a 100, 4 swimmers in a relay, 4 competitive strokes. This was destiny and nothing would keep me from the TV viewing I had so desperately not really missed. Apparently "Survivor" is still on; I thought that ship had sailed along time ago. 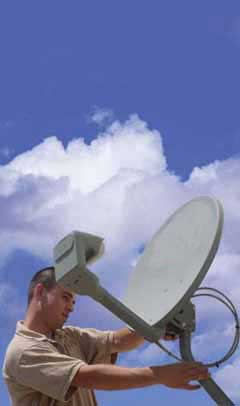 Installer #4 showed up not at the promised time of 8 am but 5 hours later, at 1 pm, armed with a work order to put a dish on the house. He had no idea about the tripod, and no receiver. He did, however, redirect the dish to get the local networks. This is interesting, I thought. Each installer (and they have all been a different person) has been able to finish approximately 50% of the job. Each one did his best and was helpful, but they seemed to be getting curve balls from customer service. It was on to installation #5.

This time there is absolutely no way there could be a mistake. The anonymous TV provider Dish N*twork had already given away the maximum allowable two free months of service and messed up four times. This is a major corporation, and they can’t afford to make this many mistakes, right? I boldly volunteered for shift #5. I had already accepted that I would be waiting til 2:00 for the installer to get there, but I was really pulling for him to have the right stuff. Just to make sure, I called to give them a gentle reminder. I was assured that our installer would be there. He would have the 522 receiver, and the tripod.

At 5 pm I started to get concerned. I called my buddies at customer service. That is when they told me that they had subbed out the job and the sub wasn’t coming. So installation #5 was a no show…0% successful.

I demanded to speak with a supervisor. After being put on hold for 30 minutes with some of the worst muzak imaginable, I was finally transfered to the customer service training supervisor. Okay this is great. I am making some headway. The supervisor told me that they had already done everything that they could, and she would get the installer there by Saturday.

The long-awaited Installation #6 is scheduled for tomorrow, Saturday. Through all of this I have learned a very important lesson as a swim coach. It is not how MUCH you can promise, or even WHAT you can promise. It’s what you can DELIVER that counts. It’s one thing to encourage your swimmers to have lofty goals, but you’re on shaky ground when you start promising they will make those goals. What you can promise, however (and this is assuming you know you can DELIVER on the promise), is that you will give the best coaching you possibly can, and that you will be consistent in your dedication to your work and to your swimmers.

Upon completion of Installation #6 (or #7 or #8 or whatever it takes), my plan is to make up for lost time by watching TV non-stop. I intend to stop shaving, bathing, working, and maybe swimming in order to get in some quality tube time. If you want to stop by sometime for the rest of the story just come to the only residence in Annapolis with an anonymous TV provider Dish N*twork dish sitting on cinder blocks in the back yard. I will be awake watching TV waiting for my DVR to come.