Our summer camp is staffed with some great people. This is a way for you to get to know of them a bit better. 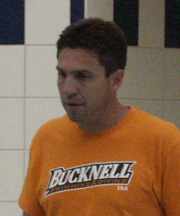 JERRY FOLEY
Bucknell Head Coach
Jerry Foley is in his sixth year as head coach of Bucknellï¿½s menï¿½s and womenï¿½s swimming and diving teams. Foley guided Bucknell to menï¿½s and womenï¿½s Patriot League titles in 2003, making it the first school to capture both championships in the same year. The historic 2002-03 season also included a perfect 7-0 record for the Bison women, a first in the history of that program. The Bison womenï¿½s team recently won the 2005 Patriot League championships, making this the first womenï¿½s team ever to win three straight titles.

Foley began his collegiate coaching and teaching career as head coach at Division II Adelphi University in Garden City, NY from 1989-94. A 1984 graduate of the United States Merchant Marine Academy, Foley also earned an MA in physical education while at Adelphi. 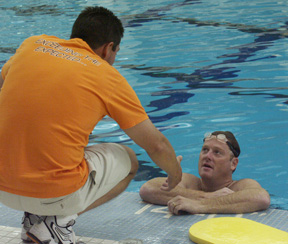 In 1994, Foley accepted a faculty position at the United States Military Academy, West Point, where he served as an assistant in the swimming program and as an instructor in the physical education department. As head assistant to Army head coach Ray Bosse, Foley supervised the distance, middle-distance and sprint freestylers. He was involved in all aspects of Armyï¿½s swimming program, including recruiting, developing workouts and training schedules, and compliance. During Foleyï¿½s stay at Army, the Black Knights remained a dominant force in the Patriot League, winning four menï¿½s championships and placing runner-up three out of four years on the womenï¿½s side.

Under Foleyï¿½s guidance, Bison swimming is now one of the top programs in the Patriot League. Foley has not seen a losing season with the Bison, and in the 2001-02 season he was named the Patriot League Womenï¿½s Swimming Coach of the Year by his peers. He earned the honor again on both the menï¿½s and womenï¿½s side after the 2003 seasonï¿½s championship performances. Foleyï¿½s menï¿½s and womenï¿½s teams have won 67 percent (53-26) of their dual meets over the last five campaigns. Under Foleyï¿½s watch, 18 of 24 womenï¿½s school records and 9 of 24 menï¿½s school records have fallen.

An engineer by trade, Foley believes that success has a plan. He believes that consistency and hard work will make all swimmers better, and he provides a structured environment that allows athletes under his care to reach their full potential. When asked how he plans to bring his experience to campers this summer, he replied, ï¿½The most important thing is to teach them skills. Like Napoleon Dynamite: you know itï¿½s all about the skills, like the bow staff and numb chucks. Itï¿½s the (swimming) skills that will allow for them to develop over the long term. We want them to have a good time, develop life skills and swimming skills, and enjoy the Bucknell campus.ï¿½

Jerry lives in Lewisburg, PA with his wife, Beth, and daughters Caitlin and Emily.

Glenn has nearly twenty years of competitive coaching experience, and has coached numerous Junior and Senior National qualifiers, a Junior National Champion, an Ohio State Champion, and many high school swimmers who went on to Division I, II, and III collegiate careers. He has trained with some of the best swimmers in the world, and has learned invaluable lessons from his own coaches: 5-time Olympic Coach Don Gambril; Stanford University Head Coach Skip Kenney; United States National Resident Team Coach Jonty Skinner; and United States Swimming National Team Director Dennis Pursley.

As a teacher, Glenn has helped develop and produce some of the most widely sold instructional videos and books on swimming. In the process, he has worked with many Olympic gold medalists and world-class swimmers, helping to distill the things they do into things EVERY swimmer can do. He has directed hundreds of weekend and week-long swim workshops all across the United States, as well as in the UK, Mexico, Australia, Korea, and Japan. He has worked with thousands of swimmers of all ages and abilities, from non-swimmers to Olympians. Glennï¿½s swimming, coaching, and teaching experience have given him unparalleled knowledge of how to teach ANYONE how to swim ï¿½ or how to swim faster and with better technique.

Through his work on the GoSwim.tv website, and in his role as Technical Advisor to Swimming World Magazine and SwimInfo.com, Glenn has written dozens of articles and drills, offered hundreds of hints and suggestions, and answered thousands of questions from swimmers and coaches at every level of the sport.

Glenn has taken the same passion and commitment that helped him excel in the pool and transferred it to the deck. When asked about his thoughts on the upcoming summer camps, he said, ï¿½Summer camp is the thing we look forward to each year. Working with so many kids is an energizing experience. Teaching, encouraging, getting to know their personalities, and discovering the best way to talk about swimming in THEIR terms, is what makes this so much fun. No two swimmers or swim camps are exactly alike. It is completely exhausting, our voices are pretty much shot by the end of the week, our feet our sore, and the biggest problem is…itï¿½s over way too soon.ï¿½

Glenn lives in Annapolis, MD with his wife, Wendy, and thirteen-year-old twins, Kyle and Samantha. 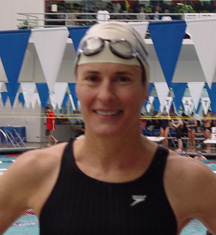 BARBARA HUMMEL
Editorial Director, GoSwim.tv
Head Coach, CCB Masters
Assistant Coach, CCB Swordfish
Barbara Hummel held numerous age-group national records in swimming and was one of the youngest swimmers to compete at Olympic Trials (age 12 at the 1964 Trials). She also swam in the 1968 Olympic Trials, and is a veteran of numerous US Senior Nationals, ten marathons, and many triathlons.

In 1998, Barbara transferred 20+ years of book-editing experience to a career in swimming. For the past 7 years she has worked with Glenn Mills, helping to create articles, newsletters, books, and videos for swimmers. She has also taught swimming technique at dozens of clinics and summer camps across the US, and has directed two weeklong technique camps for triathletes. In addition to her work for GoSwim.tv, she is head coach of a Masters team and assistant coach of a USS team in New Hampshire. She is committed to making swimming technique easy to understand and easy to use.

Barbara lives in Woodstock, VT with her husband, Kermit, and has two stepchildren ï¿½ Hannah, age 21, and Miguel, age 13. 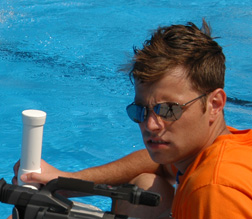 JUDSON AUNGST
Coach, GoSwim.tv
Judson (Judd) Aungst has been coaching since 1996, and has worked with swimmers of all levels, from beginner to Division I. From 2001 to 2004 he was Assistant Swimming and Diving Coach at Bucknell University, working with Head Coach Jerry Foley, and responsible for writing and coaching practices for the sprint group. While he was an Assistant at Bucknell, both the menï¿½s and womenï¿½s swimming and diving teams captured their first Patriot League titles.

During his last season at Bucknell, Judson wrote a weekly column for GoSwim.tv under the pseudonym of "Coach Black." His diary-like entries chronicled the ups and downs of a collegiate season.

Judson currently resides in Annapolis, Maryland, where he works full time at Go Swim International Headquarters. He has assisted Glenn Mills at dozens of team clinics and at numerous summer camps. 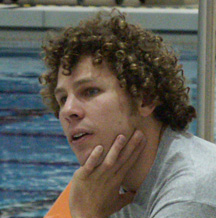 SEAN MARTIN
Bucknell Assistant Coach
Sean Martin is a recent graduate of the Schreyer Honors College, and was a member of the Penn State Menï¿½s Swimming and Diving Team. As a swimmer, Sean has competed from the age-group to the NCAA Division I level. His coaching experience includes age-group, high school and, in his role as Assistant Coach for Bucknell, NCAA Division I-level teams. He coached the Lewisburg, PA Gators team to two age-group championships in both of his seasons as head coach. He now volunteers his time in the summer to work with the local team, coaching kids of all abilities and skills. He has also been an active volunteer coach at the Lewisburg Area High School, which, since 1999, boasts three PIAA State Champions with multiple individual titles, including himself. Sean is pursuing an MA in English as he moves into a graduate coaching role at Bucknell.

REBA PERRY
Bucknell Assistant Coach
Reba Perry is a 2003 graduate of the University of Central Oklahoma, with a Bachelor of Education degree in physical education and health. While in school, she completed student-teaching assignments at the elementary, middle, and high school levels. She also coordinated a teen leadership program and taught swimming and water-safety skills. In 2000, Perry was head lifeguard and head diving coach at a private aquatics club in Oklahoma.

In 2004, Perry earned a Master’s Degree in exercise and sport sciences, with a concentration in sports pedagogy, from Ithaca College. While earning her MA, she assisted undergraduates in neuromuscular laboratory work and served as an assistant coach with the Ithaca swim squad, where she helped lead the Bombers to an NYSWCAA championship.

At Bucknell, Reba works with Sean Martin to prepare the sprinters for competition. In 2005, one of the Bucknell women was the Patriot League champion in the 50 and 100 free, and set a new pool, school, and league record as part of the Bucknell 200 freestyle relay. 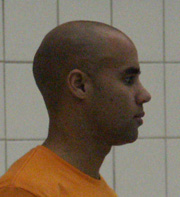 CRAIG STRONG
Bucknell Assistant Coach
Craig Strong is a 1995 graduate of West Chester University, where he earned his BA in philosophy, and where he is presently finishing graduate work in that subject. At West Chester, Strong earned four varsity swimming letters and was team captain his senior year. Following his graduation, Strong spent seven years coaching at the club level, then coached for one year at Albright College. During his year at Albright (2003), the Lions won the Middle Atlantic Conference swimming title on the womenï¿½s side for the fourth consecutive time and for the first time on the menï¿½s side since 2000. Strongï¿½s head coach, Jenis Frederick, won both menï¿½s and womenï¿½s Coach of the Year honors in the conference. At the 2003 MAC Championships, Albright College took home titles in nine events on the menï¿½s side and five events on the womenï¿½s side.

During his two years as assistant coach at Bucknell, Strong has been in charge of the stroke and IM group. During that time, the swimmers in his stroke group have broken several school, pool, and league records. He has also had swimmers qualify for USA Swimming Nationals and, provisionally, for the NCAA Division I Championships.

SANDY ELION
Bucknell Assistant Coach
Sandy Elion, who has a BA in child development from Connecticut College and an MA in education from the University of Iowa, is in her 10th year as a member of the Bucknell coaching staff. A teacher and co-director of the elementary program at the West Branch School in nearby Williamsport for the last 26 years, Elion brings to Bucknell a wealth of swimming knowledge and experience. In the Bison program, Elionï¿½s primary responsibility is working with the stroke group, and her Sunday optional workouts are always a favorite among the Bucknell swimmers.

A consistent record-setter in many midwestern and central U.S. swimming championships, Elion competed in the 1962-63 U.S. National Championships. She also competed for eight years on a Central AAU (now US Swimming) team, serving as captain for three years.

Elionï¿½s coaching experience includes several years of age-group coaching, first at the Susquehanna Valley Aquatics Club and then at the Williamsport YMCA. Most recently, Elion coached at Williamsport High School from 1988-93, helping lead the team to four District IV titles. She also has experience as a volunteer coach, stroke specialist, and stroke judge in the Williamsport area.

We regret to announce that in 2006 Go Swim will not host any week-long summer swim camps. This was a difficult decision for us, because we will miss seeing all of you and working with you.