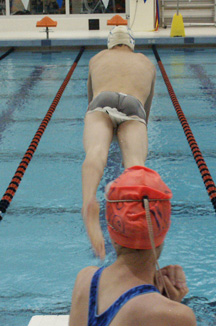 We’ve recently received a few phone calls and e-mails from parents who were considering our summer swim camps, but were concerned that they might be geared toward younger, less serious swimmers. They wanted to make sure that a Bison/Go Swim camp would benefit their high-school-age kids, most of whom were already pretty good swimmers.

Turns out that these parents had been looking at the camp photos on our website, and had gotten the impression that what we do at camp is stick tattoos on the swimmers, and have them hang out on deck and smile a lot. Well, we DO stick tattoos on the swimmers (more about that later), they DO spend some time on deck (between stations), and they DO smile a lot, but I want to assure every parent that we take this swimming thing VERY seriously.

What I want to convey here with words and with additional camp photos, is a clearer picture of what your swimmer(s) can expect at a Bison/Go Swim summer camp. I hope that by presenting a little more background on myself and the other coaches, and by describing how the swimmers are grouped, you can get a sense of the philosophy, commitment, and experience that we bring to our camps.

As a young swimmer, I was fortunate enough to have some of the greatest coaches of all time. As a junior and senior in high school, I moved away from home and trained with the Cincinnati Marlins, one of the strongest teams in the USA at the time. Our team was known for high yardage and heavy workloads. It was a grueling place to train. We placed six swimmers on the 1980 US Olympic Team. Our other coaches are also very familiar with high-intensity training, either through their own swimming or through their coaching. They have competed at League Championships, Senior Nationals, Masters Nationals, and at Olympic Trials. Many coach at the NCAA Division-I level. 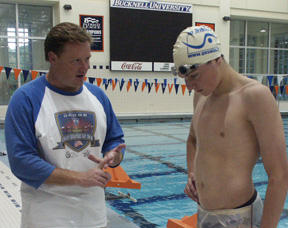 What our coaches bring to camp is a feel for…and an appreciation for… high-intensity training. We also have a keen awareness of the importance of technique and race strategy. It’s our job at camp to set up situations where we can observe HOW the swimmers train and then help them to train with more focus and attention to detail. It’s also our job to convey those aspects of technique and race strategy that will bring them the most benefit. We know what your swimmers go through in training, and what they face in competition. We want to give them tools to help them train and race more effectively when they return home.

Our coaches are chosen for their ability to communicate. We don’t yell and demand that kids do things just because we say so. We’ve all been on the receiving end of that kind of coaching and know that it’s not the most fun. We know that we can ask more and expect more when we explain WHY and HOW something should be done. We know kids will respond better if we speak from a base of experience, authority, and practical knowledge. We know that each swimmer learns in a different way, and we try to find that way for each camper. We know that kids learn more when they’re having fun (we sure do!), so we love to see kids smiling on deck and in the pool (except when they’re WORKING!). 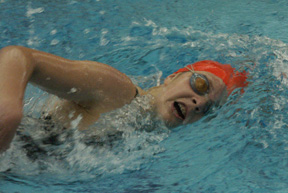 We organize the swimmers into small groups based roughly on age and ability. And we take each group as far as it can go in terms of what they can learn and absorb. The groups rotate among several different "stations," so they have a new coach and a new set of things to learn every thirty minutes. We’ve learned that 30 minutes is about the right amount of time to cover a subject yet keep everyone focused and motivated. The swimmers rotate from station to station throughout the day, and will repeat various stations throughout the week. This allows them to learn, practice, progress, and master specific techniques that are individually geared to THEM.

Sometimes it seems like all we do at camp is swim, eat, swim, sleep, and swim some more. That’s good, right!? But as we transition from dorm to dining hall to pool and through the various stations, we laugh, share stories, play guitar, watch videos, and generally have a really GREAT time. We appreciate the fact that parents have entrusted their kids to our care. We run a safe camp, a fun camp, and a camp where kids will learn as much about swimming as they’re willing to absorb. We enjoy spending time with each swimmer. We want them to WANT to come back, not only because of what they’ve learned, but also because they know we’re hoping they become the swimmer they want to be. 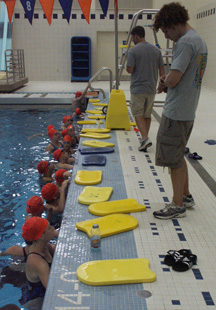 Now, about the tattoos. Barbara and I both grew up in Ohio, and although neither of us went to Ohio State, we grew up watching the Buckeye football team reward great plays by gluing a small Buckeye-leaf sticker to the back of the player’s helmet. The Go Swim tattoos are in the same tradition. These tattoos aren’t given lightly; the swimmers must EARN them. Sometimes they can be won by paying attention. Sometimes by making a breakthrough discovery…or by doing a stunning job on a particular skill. Sometimes they are awarded for proper application of technique…or through great swimming. Sometimes they are given for being polite. When a camper is doing something really well, we like to pull them up on deck and award them with a tattoo. This usually makes them smile, and that is why you see so many smiling faces (and tattoos) on our website. They show that we have a lot of fun, but they represent a lot of hard work and accomplishment.

I hope these comments will allay any concerns that we are a less-than-serious swim camp. We take our teaching roles very seriously, and we have some VERY serious and accomplished swimmers at our camps. But we know how important it is to have fun, too.

Speaking of fun…please be sure to check the site every Friday. In the next month or so we will post a certain race that took place LAST summer between the swimmers and the coaches. If most of these swimmers return in 2005, I have a feeling the coaches may be in BIG trouble this year. I guess we’ll see.

We regret to announce that in 2006 Go Swim will not host any week-long summer swim camps. This was a difficult decision for us, because we will miss seeing all of you and working with you.