I was recently asked about my views, or philosophy, on training young swimmers. Because so many parents are visiting the site, I thought we should revisit this question. 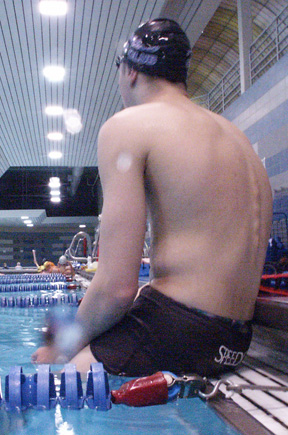 First, I want to say that there are NO absolute answers in swimming. Every swimmer is different. Every year there are new ideas, new insights, and new possibilities revealed by swimmers and coaches at the cutting edge of the sport. We have to keep looking for new answers. And even when we think we have an answer, we have to realize that all we’ve really hit upon is the CURRENT answer for THAT swimmer at THAT time. As swimmers mature, the questions – and answers – start to change. Their bodies are different, their training and goals are different, and their strokes are different. So one of my views or philosophies is that we all have to keep searching.

One question that swimmers, coaches, and parents are always trying to answer is: How much training versus how much learning (technique work) should a swimmer be doing. There’s no right answer. We have to keep searching. Somewhere along the line (and, you guessed it, the timing is different for every swimmer), there is a shift in the ratio between teaching and training. The balance between the two is constantly shifting, and the coach and swimmer need to be tuned in to the need for finding the right mix for that particular athlete.

When I think about how to balance training/teaching for any particular athlete, I use my own experience as a guide. For example, I think about how I learn. I’d like to play guitar better. Depending on how the mood strikes me, I sometimes pick up my guitar every day for an hour or so, while I relax at night. I’ve been playing for a while, so I have certain traits…and certain riffs…and a sorta "bluesy" style of playing. The trouble is, I don’t vary what I play too much, because I’ve never had any lessons. Since I also mostly play alone, I’m not exposed to many new things. I’ve basically become stale in what I play, and it’s starting to get pretty boring to me (my family says it became boring for them a couple years ago…but that’s another story). 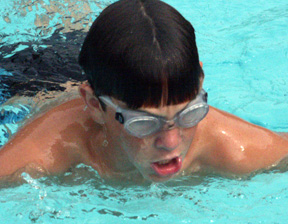 Fortunately, a couple times a year, I get together with the friend who started me playing, and he shows me some new stuff. It’s great to be shown something new, and then to practice it, and finally incorporate it into my daily playing. The smallest example or suggestion from my friend can open up a whole new world.

Could I have discovered those things on my own? Maybe…but it would have taken me MUCH time. Time I just don’t have to dedicate to playing guitar because I’ve got many other things to do as a Dad, husband, and guy trying to run a small business. Guitar isn’t high on the priority list. In other words, playing more would certainly have benefits, but what I’ve learned is that I just get better, or smoother, or faster, at playing what I already know. It’s TOUGH to discover new things or to have any breakthroughs. Discoveries usually happen by accident, and trying to recreate them is sometimes very frustrating.

Now let’s take that same example and apply it to swimming. You know what you know. You come to each practice with a knowledge set that you’ve acquired over however many years you’ve spent in the sport. If you’re young, that knowledge set is small and limited. Usually, when a swimmer gets to practice, he/she is asked to rely on whatever knowledge or skill they come in with. It’s up to them to make DISCOVERIES on their own. Since we all know how tough that is, we’d only want to ask them to accomplish that once we’ve taught them A LOT! Remember, although they’re swimming once, or twice every day, they’re still not pros. They also have to balance school, family, friends, and all that goes along with being a kid. 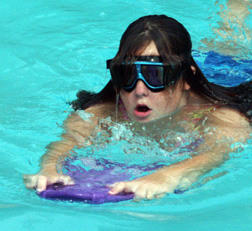 Sometimes, when my friend and I play guitar together, he starts by jamming with me without too much talking and no real plan. This can be fun, but most of the time I feel like I am just scrambling to stay up with him. I get lost, and then he’ll stop and show me some new stuff and we’ll try again and it goes a lot easier. I imagine that this is a lot like how swimmers feel when they show up at practice and -without much explanation or plan — are asked to go faster, swim harder, and make tighter and tighter intervals. It’s kind of like being asked to "discover" via survival. Sure, in this scenario, the cream will rise to the top, but too many swimmers get lost in that equation. Swimmers will get lost due to lack of feedback, they’ll become injured due to poor mechanics, and they’ll drop out from boredom or from anxiety about not knowing what to expect in the next practice – except that they can always expect more mental and physical pain.

It’s our job, as coaches, to sometimes STOP thinking like coaches, and step back to look at the tools we’ve given our swimmers. We get so caught up in HOW MUCH that we forget that HOW is just as important. We get so concerned with "jamming" – getting in the fast, hard, complicated sets, that we never take time to stop and learn new chords or fingerings or rhythms. We’re so concerned that if we sacrifice the distance, we’ll have athletes not fit enough to compete. All you have to do, however, to learn that fitness isn’t the only factor in swimming is visit a Masters meet. You’ll see people in their 30s, 40s, 50s, and even 90s, who aren’t in the best of physical condition (mostly 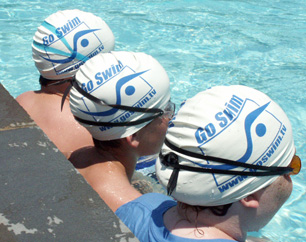 because they have careers and families), but who are laughing and playing around and swimming VERY FAST! I’m not saying they don’t train hard, I’m just saying they don’t train NEARLY as much as kids do, but they bring to the table a HUGE knowledge base of how they swim from a TECHNICAL perspective. It’s not unusual for Masters swimmers to be swimming faster now – at whatever age that might be — than they did as age-groupers or college swimmers. Usually, they will tell you it’s because they train smarter, eat smarter, and have learned better technique. Also, ask any of them whether they’d like to take all this knowledge and relive their earlier swimming careers, and you will hear a big YES. It’s called hindsight, and we’d ALL say yes to that. 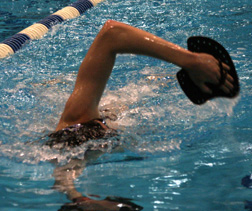 The big question is how to find the right balance between teaching and training. This is where it becomes an individual thing. I’m not a fan of the school that says everything has to be technique based and drills only. Technique work and drills are important, but I don’t want swimmers to become so bored that they head off to the soccer field. On the other hand, I don’t believe in programs that are all about yardage. There’s a lot of learning that comes from PAIN, AGONY, and learning how to adapt your stroke when you’re SO dead that you can no longer feel your hands. There’s a lot of learning that comes from slowing down, too. Pain, agony, and thoughtful learning of proper mechanics are ALL part of swimming and racing. And you need to be exposed to ALL those things before heading off to a meet.

My philosophy is very simple, and can be listed in one, simple sentence:

Teach before train and then, once taught, TRAIN LIKE CRAZY!

If you want your swimmers to reach their potential, you MUST develop technically sound strokes, and use those strokes in physically SOUND bodies. The goal is for everything to come together at the moment the athlete’s TRUE goal is before him/her. Everything up to that point is simply a learning experience.

This gets us into an entirely new issue. Whose goal drives the training? Do the swimmers have to adhere to the coach’s timetable? Or, does the coach change the structure of the training based on a long-term goal of the swimmer? That’s an issue for another day.