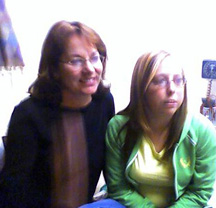 It didn’t really hit me until we walked onto the transplant floor of the Cleveland Clinic on Tuesday. It wasn’t the dozens of doctors and nurses running around in scrubs. It wasn’t all the oxygen tanks and high-tech equipment. It wasn’t all the family members who were there as part of the support network. It was a little photo gallery, off to the side, that made it finally hit home. Neatly arranged on one wall were framed photos of what appeared to be average, everyday, normal folks. They were all smiling. And in the lower corner of each photo was the word…Hero.

It’s such a small word. But it had a real impact. It hammered home the seriousness and finality of the situation in a way that none of our hours of discussion had done.

Several months ago my wife, Wendy, decided to donate one of her kidneys to her niece. Grace, age 23, has suffered from health problems since she was 11 years old. A "normal" life was something that had ceased to exist for Grace over half her life ago. Wendy decided to give a gift that would allow Grace to be just like the rest of us. I’ve known Grace since she was 5 years old, and have been inspired by the way she deals with adversity. Only, she doesn’t see it that way. Her attitude has always been…this is how it is for me, and what do I have to do next to move on. It’s tough not to be cynical when you’ve been poked, prodded, and fed more drugs than a Major League baseball player for the majority of your life. But Grace has handled it all with…wouldn’t you know it…grace. She’s someone who leads by example, teaching you to pause before you complain about traffic, or stress, or a tough set at practice.

Wendy had many things to consider and a choice to make. She decided that she must give Grace the chance for a normal life. I had many things to consider and one choice to make — to be totally supportive of Wendy’s decision. For some reason, seeing that photo gallery, and knowing that Wendy’s photo would soon hang there with the word HERO at the bottom, brought it all home. 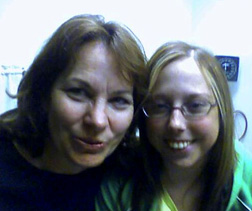 So often we associate the word "hero" with legendary sports figures. Or we associate it with larger-than-life cartoon characters like Superman or The Incredibles. These are people we will never meet and never know in a personal way. But a true hero is someone who has a REAL impact on our life. It’s someone who doesn’t just inspire us from afar, but who is part of our daily life and sets a real example for how we can act and the choices we can make. It’s the police officer who fights criminals during the day and then volunteers her free time as a scout leader or coach. It’s the firefighter, heading into a burning building to save another’s life. It’s the teacher who starts a free literacy program. It’s the soldier fighting to protect country and fellow soldiers. When you ask these heroes why and how they do what they do, the answer is usually something like, I’m just doing what needs to be done.

True heroes don’t see themselves as heroes. They claim that you or I would do the exact same thing if placed in their situation. They downplay their actions as something less that what they are. They always seem to focus on the recipient of their actions, rather than on themselves.

Wendy’s surgery lasted 5 hours, way longer than any of us expected. We then got word that Wendy was out, and that Grace was receiving the kidney. A couple hours later, I got to see my wife for the first time. The FIRST thing she said to me was, "She’s peeing!" Funny when you read it. Monumental when you realize what it meant. Grace hadn’t done that on her own for years. The first thing Wendy said wasn’t about Wendy. It wasn’t about her pain, her dry mouth, her rough voice from the airway opener (I don’t know what that thing is called), the new scars on her stomach, the IVs shoved in her arms, and more. It was about Grace, and the victory the two of them had conspired to achieve…and did. 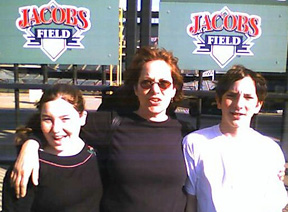 Heroes rarely act alone. Someone has to "help" them in the act, and for Wendy the helper was Grace, who was no less a hero than Wendy. Grace faced this with braveness rarely seen in a 23 year old. For Grace, this wasn’t just a big race, this was THE race. She came through with flying colors and, over the next two days, I can tell you, she was peeing up a storm…and so was Wendy, which means her other kidney is functioning just fine. I’ve never been so happy to see so much pee! (My writing is now inspired by Dave Denniston!)

It’s been a very long week, surrounded by family and friends. I’ve seen the spoils of being a hero. My wife was placed on the Founders Floor of the Cleveland Clinic, the floor reserved for Kings and…well…HEROES! I dined on prime rib as the guest of the hero, and they treat doners as they should…as heroes.

Why write all of this? First, to proclaim how proud I am of Wendy and what she chose to do. To honor Grace, who has faced years of hardship with grace, and come through with a tremendous victory. And…to let all athletes understand how LUCKY they are to have the ability to train, compete, and enjoy the life of an athlete.

REVEL in your pain in training, because you chose it. LOVE the frustration of searching for improvement, because you can. LONG for that nervous, scared feeling on the blocks prior to your championship race, because the alternative is watching from the stands. And CHERISH your time as an athlete because, before you know it, you’ll be an old athlete looking back. 🙂 Do all you can NOW, so you can look back with no regrets.

I’ve been so fortunate to be surrounded by heroes my whole life. Luckier still that they were all in my family. Look for your true heroes closer to home, and I think you may be surprised just how surrounded you are. I certainly know I am.

For more information on how you can become a hero too, visit www.donatelife.net