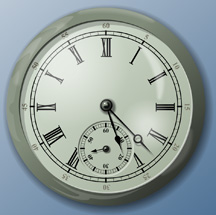 It’s early in the morning, you’re sound asleep, the alarm goes off, and you’ve got two options: 1) get up and head to practice, or 2) hit the snooze. Far too many people chose option 2 and then the trouble starts. It’s like dominoes, one action leads to the next, which leads to the next, and so on.

I guess the real question shouldn’t be why not another 5 minutes, but what impact would arriving on time have compared to the impact that 5 minutes of sleep can give you. First, arriving on time is a sign of respect for your coach and your team. It shows that you consider their time as valuable as yours. In today’s society, we see more and more people who think the world revolves around them, and that others are here only to cater to their needs. While that would be great for THAT person, the trouble occurs when EVERYONE thinks that way.

If you’re the ONLY person on your team, or if you are heading to a private lesson that you’ve scheduled and paid for, then if you are late it’s not being very respectful of the teacher, but you are still paying for the hour of time you’ve contracted for. You will simply get a little less of the time you paid for. From strictly a dollars standpoint, being on time is in your best interest. Not to mention the benefit you receive from those extra 5 minutes of instruction. They could be the 5 minutes in which you make a breakthrough discovery. But you’ll never know that if you are late.

The same thing applies to your training. While it’s easy to imagine that 5 minutes of warm-up isn’t that valuable in the whole scheme of things, it has as much to do with the integrity of your actions as it does with your warm-up. It’s the tiny bit of slacking that starts to creep in to your athletics. Athletics is about discipline and commitment. It’s about following through with the things you’ve set as goals, and, however you put it, attending practice is actually a goal.

If your practice is 120 minutes long, and you’re 5 minutes late, it may not seem like a big deal, but if it is a GOAL to get to practice, then by arriving 5 minutes late you’ve actually fallen 4% off your goal.

Let’s apply that to an actual time goal…say…1:05.7, the Senior National cut in the 100-meter breaststroke for men. Four percent of 65.7 seconds is more than 2.5 seconds. A difference of 4% is the difference between making Senior Nationals…and having a best time of 1:08. In the whole scheme of things, there are probably thousands of swimmers who have a best time in the range of 1:05.7 and 1:08.

While no single 5-minute chunk of time seems like a big deal, they all add up. Five minutes (4%) of missed practice each day can have serious performance impact later in the season and later in your career. I’ve said it before, and I’ll say it again: You need to think of your athletic career with a sense of panic. That panic should be shown in your DESIRE to train, and in your desire to show up at practice to learn as much as you can from your coach, or to get as much from the training as possible.

What is 5 minutes? It could be everything. Not only the respect of the people who have decided to work with you, support you, and care about you as a person and an athlete, but also as an athlete yourself.

Now set that clock and if you REALLY want 5 more minutes of sleep, listen to your Mom and Dad, and go to bed 5 minutes EARLIER. Don’t react. Plan.