It could be a glance, a movement, a written word, or simply the presence…intimidation comes in MANY forms. In athletics, intimidation can be direct, or subtle, and knowing how to deal with it is either built into an individual’s character, or developed through maturity.

Just about every swimmer has felt intimidated at some point or another in their career. No matter how fast you are, at some point in your journey you’ve had to race against someone faster than you, or someone with a proven track record. Heading to Junior or Senior Nationals for the first time very often carries the AWE factor of just being on the same deck as Olympians and National Team athletes. 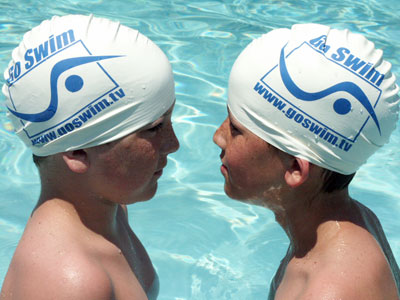 These athletes have an intimidating presence just by being who they are. Just by stepping onto the pool deck they are intimidating, and it’s easy to fall into the trap of not believing you belong. If this is the case, they’ve already won, and it’s the easiest kind of victory for them.

Step by step, little by little, swimmers destined to be at the elite level begin their climb to the top. Sometimes they inch their way up; sometimes they LEAP. When this begins to happen, the intimidation factor of the top athletes is diminished, and you begin to carry with you, a bit of intimidation as well. Even though you’re probably only looking UP at that point — at the people you admire and hope to BEAT someday — remember that there are always people behind you. There are swimmers whom YOU now intimidate, and who are hoping to someday beat YOU. Once you’ve made it to the top, it’s tough not to begin glancing behind you to see who’s coming. When you’re at the top, you’re the known quantity. It’s now the "up-and-comers" who carry the sense of the unknown. In many cases this gives them the upper hand, even though they may not feel it.

The advantage of being at the top is that you’ve more than likely already paid many dues, and are battle hardened to competition. In other words, you’ve already been through so many forms of intimidation that not too much is going to affect you. But I did say NOT MUCH…nobody is unbeatable.

Intimidation comes in MANY forms, and will be with you in any competitive situation in your life. Business people are often intimidated, or intimidate based on their ability to get the job done or on past experience. Some coaches intimidate with knowledge, demands, history, or force, while others are intimidated BY knowledge, or the unknown. Many coaches are intimidated by parents who question their methods or reasons for doing a particular thing…or by just asking a simple question of WHY? Why are you doing so much yardage? Why aren’t you doing more yardage? Why aren’t you working on starts? Why aren’t you correcting the technique?

While a good coach will LISTEN, take heart, or already have the answers through planning, theory, or admitting fallibility, many coaches find questions threatening or intimidating. I’ll admit it publically right now, I don’t have the answers to a LOT of questions about swimming. I can’t look at every swimmer and tell you what he or she should be doing to get faster. Maybe it’s just that I’m so concerned with giving the correct answer to the swimmer, that I allow myself to ask THEM questions. I admit that I need a swimmer’s feedback and help in order to start to help them. I guess, in that sense, I’m like the Jerry McGuire of coaching, asking the athlete to, "HELP ME, HELP YOU!"

I LOVE questions, and don’t find them intimidating. Questions help me to understand what I HAVEN’T explained. They help me search for all the reasons WHY someone should do what I’m suggesting. If the athlete doesn’t know why she’s doing something, she probably won’t give the effort necessary to get the most out of whatever it is she’s doing.

Intimidation as an athlete is a good thing, even if you’re on the receiving end of it. It makes you AWAKE…ALIVE…maybe even a little SCARED. One thing it DOESN’T make you is complacent. Intimidation as a coach, or businessperson should have the EXACT same effect. We’re in a competitive environment, and if you want to be the best, you’ll come upon a situation where you’re either intimidated, or you intimidate. You can either stand back and try to take a defensive stance, or you can ATTACK and do whatever you’re doing BETTER.

If you’re involved in athletics, get used to intimidation, and learn how to use it to your advantage. You don’t have to be a bad sport, either; you can intimidate just by being successful. People who aren’t willing to put everything on the line, all the time, CAN’T STAND successful people, and in that, you never have to say ANYTHING to intimidate…you just have to continue doing what you’re doing. 🙂