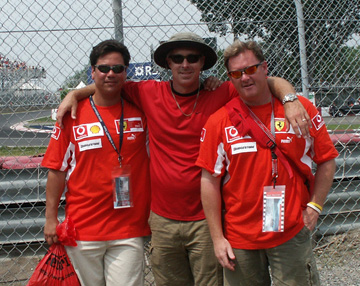 Last weekend I had the opportunity of a lifetime, at least for me. I traveled with two of my best friends to Montreal for the Formula 1 Canadian Grand Prix of Canada. Being an F1 fan, this was something I had looked forward to for years.

First, please understand that I’m the kind of nut who sets his alarm for 1 am to watch the F1 races live from Bahrain. Speaking of Bahrain, the temperature in Montreal last weekend actually MATCHED that of the race in Bahrain earlier in the season. It was VERY hot.

This weekend brought with it many emotions, mostly awe for the tremendous athletes who drive these thunderous beasts. Those of you who don’t think these guys are athletes, imagine pulling 4 to 5 gs while holding a perfectly controlled line while sweating in 120-degree heat. Now do that for 1 and a half hours. Trust me, these guys are FIT.

The MOST impressive thing that I’ll take away from this weekend was the experience of being around so many people. I’m not big on crowds, so the 360,000 people who passed through the gates during the 3-day event put me way beyond my personal comfort level. It’s not that I’m nervous or afraid when I’m around a lot of people, it’s that I don’t like being crammed in, and I dislike having to jockey for position among rude people intent on being the most important person there or getting the best view. 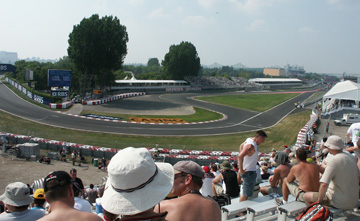 One reason John Moffet, Craig Beardsley, and I chose the Canadian Grand Prix was to get the FULL international experience of a race. Since there aren’t any American drivers in the sport, it’s not a huge sport here…yet (GO, SCOTT SPEED!). It’s a HUGELY popular sport in the rest of the world, so we wanted to experience what it’s like in a totally international crowd.

The weekend was emotional also because of whom I was with — two of my teammates from the 1980 Olympic Team…the boycott team…the team that wasn’t allowed to go to the Olympics because our government wanted to use athletics as a way to show how mad we were at the Soviets. In other words, the team that was used, in a way, to divide people and nations. 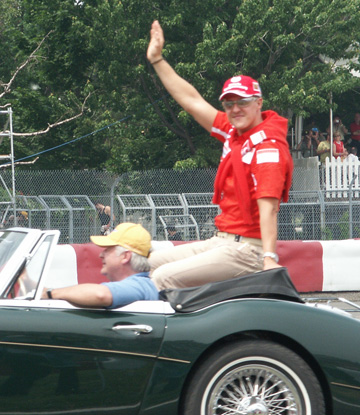 My experience last weekend in Montreal only confirmed my belief that sport should not be used for political gain or to make a political statement. Sport – and in particular international competition — has a tremendous capacity to bring people together. It has this effect not just on the competitors, but also on the spectators. Even with hundreds of thousands of people filling the stands in Montreal, I did not witness ONE incident of stupidity or rudeness or cultural bias the entire weekend. There were times when we were so smashed into small spaces, with others trying to get through gates, that I expected a riot. But it never happened. People were polite, gracious, and friendly. There were small spaces in the fences for the corner workers to jump through in case of an accident, and these spaces were GREAT for taking close up pictures of the cars and drivers. People actually TOOK TURNS, and allowed others to get in front of them to have a chance to get some shots. 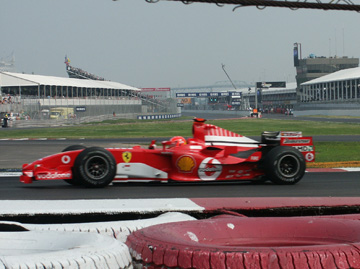 This was, in all my years, the most amazing outpouring of international unification I’d witnessed, and it took place at a sporting event. What does that show us? Sports actually bring people TOGETHER! Yeah, can you believe it? Although people were dressed in different-colored uniforms to support their favorite team (John isn’t a Ferrari fan but he dressed in red for Craig and me), they respected the other teams for what they have to do to perform at this level. 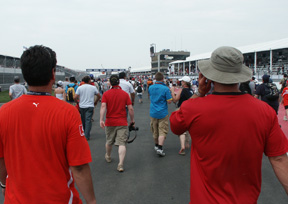 This was a fantastic experience, and one that I would like to repeat. I loved being a witness to this tremendous event, and loved that so many people shared in it with such great courtesy to their fellow fans. This certainly showed me that we, as people involved in sport, have a great responsibility to treat all our competitors, and their fans, with respect and courtesy. Thank you, Montreal. Thank you, F1. And especially thanks to Fernando Alonso for being ON OUR FLIGHT HOME! I got to shake hands with the man leading the F1 World Championship race. Although I’m a Michael Schumacher fan, it was very cool to meet Alonso, and to wish him success with the rest of his season. I wished him well on his race this weekend in Indianapolis, USA.

What I learned is simple. Sport brings people of all lands closer together. It’s wrong to try to use it as a "weapon" when people are in conflict. Why not use it instead to allow athletes and spectators to embrace the struggle for success that everyone shares.