About a month ago, I was asked to help out with a short film in NJ. It was a really cool, eye-opening day, showing me what is possible by humans, and how little we all utilize our potential. 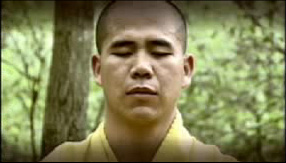 We spent the day in the wild woods of Chatham, NJ. Some bears had been spotted a few days before, but the crew members were pretty sure they could handle a bear encounter. Me, I just planned on throwing the camera since it wasn’t mine.

This all came about when my good friend Craig Beardsley asked me for some help. Craig has been studying martial arts with Zhang Li Peng, a Shaolin monk. I mean, sure, I was intersted in meeting a Shaolin monk, but really had no idea what I was in for.

Li Peng is a rather small, non-imposing figure, well…that is, when he initially gets out of his car. His reputation preceeded him, so I was careful to be very respectful. He was a quiet man, but he had massive presence.

I figured I’d show you this video, since I’m actually kinda proud I was involved in it. It was a great opportunity to see what someone is able to do when he dedicates himself completely to a goal, a task, and a lifestyle.

It’s a short movie, but please understand that it uses no special effects. Except for some creative editing, what you see is what we shot. After you watch it a couple times, try to imagine what you could do in your swimming if you focused on your craft as intently as Li Peng does on his.

Can you say untapped potential in EACH of us? I was certainly impressed, and humbled.
Click here for movie.

PS
As the credits indicate, I filmed this under my Hollywood alias "Glen Mills." I left off the second "n" so nobody else would know it’s me. Pretty tricky, huh?