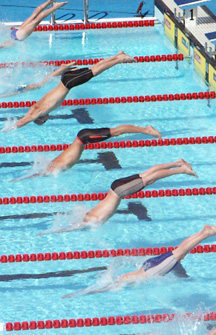 Where do you go once you’re on top? How do you continue to move forward? What’s the BEST thing that can happen to you to keep you alive, and fighting? Competition! But don’t worry. It will come. And it will come from sources you didn’t know were out there. Once you’re on top, your job is to prepare for competition that you know is coming, and hadn’t previously expected.

I was fortunate as a young swimmer to have a chance to train on a team that had five of the fastest breaststrokers in the country. I had to move away from home in order to have this opportunity. Locally, I won most of the meets I swam in. When I got to my new team, I pushed off 6th in the lane. I know I’ve told this story before, but bear with me here. By SEEING what my competition did on a daily basis, I finally understood what was possible as an athlete, I was able to move up to the next level.

If you’re in a situation where you’ve been on top for a while, whether as a local swimmer or as a local team, there’s a good chance that you’re NOT swimming to your potential. There is such a sense of relief when you’ve won, or moved to the top of the ladder, that you relax a bit. You look back on your accomplishments, and expect them to continue.

Nothing is further from the truth. This is why large businesses that don’t change with the times get eaten by smaller businesses who are quicker to respond to current trends and technology, and who offer far better customer service because they’re HUNGRY for business, not complacent about where they are. The businesses that survive are the ones that can adapt to the times by being proactive rather than reactive.

Don’t worry. Competition is one of the few things in life — like death, taxes, and change — that is sure to come. If you’re an athlete, it’s a HUGE world, and no one is exempt from new competition creeping up. But this shouldn’t be seen as a negative thing, but rather, a GOOD thing.

This past week, I’ve watched two very inspirational movies. While I had my problems with both of them, I understood why they were made, and the victories behind the stories. The movies were Coach Carter and Friday Night Lights. While I’ll not get into my criticisms of the movies, I’ll focus on the positive aspects. Both movies spoke of how people can lift themselves to a new level, something unexpected, if they forge ahead through adversity, and competition. People are capable of amazing things if they look forward rather than backward, if they focus on where they’re going, and if they look for the BEST possible way to get there. People are capable of awful things if they try to sabotage new competition through misinformation, or by getting in someone’s way. Why do cyclists wait for a rider who’s fallen, rather than attack while they’re down? They want to win only if they deserve to win, not because they are the only one racing.

When you’re fighting no one, you’ll eventually stagnate simply because it’s very difficult to see changes (race strategies), new ways of doing things (training ideals), new technologies (techniques), and those are just the obvious things. There are so many hidden qualities that come with competition creeping up on you. Sometimes it’s the simple fear of losing that keeps you awake, alive, and fighting to stay on top. 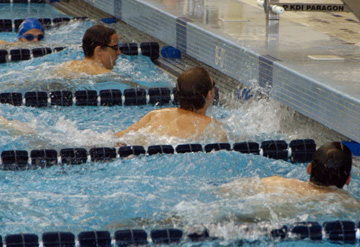 As an athlete, or team, the one thing you should be looking for is competition. Of course, I’m ASSUMING you want to improve…I could be wrong. Maybe you’re satisfied being exactly where you are. Maybe you fear competition because you know it means more work, more study, more time spent working on your craft. If you’ve reached that point, the point where you’re so satisfied with everything you’ve accomplished in the sport, that you don’t want to work harder anymore…CONGRATULATIONS. It’s time to move on. Take the energy that got you to your goal, and send it down a new road. Instead of being a champion swimmer, be a top salesperson, a leading researcher, an innovator in your field, or, heck, maybe even a really good swim teacher. Chances are good that the same qualities that made you a champion athlete are inside of you always, ready to be put to a new use.

Until that time comes for you, until you’re completely satisfied with what you’ve accomplished in whatever it is that you’re doing right now, then you should look for and welcome competition. It will make you better at what you do…or you’ll simply get beat. Remember, no matter who you are, where you are, or what you do, the competition is coming.