"The more I see him (Lance Armstrong), the more I tell myself that he’s the only one. He’s on another planet." — Salvodelli, Discovery Team 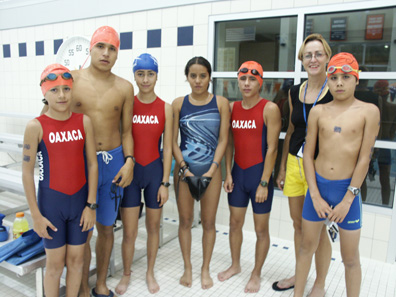 In November 2000, an idea was born. The dream was to create an Olympian in the State of Oaxaca, Mexico. Two children and a mother initiated the project, and followed me as their coach on this planet for six months before three cousins and an aunt joined us in the adventure. Today, almost five years after our journey began, team Oaxaca is on another planet. Part of the reason is that, for a second time, several our team members experienced living in another culture.

In June 2005, as part of the continuing search for "connections" and "skating" of the educational program initiated in November 2000, team Oaxaca traveled to Lewisburg, PA, to attend a swim camp led by Glenn Mills. From the beginning, Glenn has been one of the mentors of our team concerning swimming and the philosophy of being an athlete.

It took 11 months, starting in August 2004, to plan this project. We wanted to spend three weeks in the USA and Canada. The simple concepts of planning a year ahead and saving money were outside the dominant culture of Oaxaca, yet the parents agreed to plan and save. Our team has developed in each one of the members the concepts of self-discipline, concentration, focus, and respect for each other, in addition to planning and passion for our tasks. 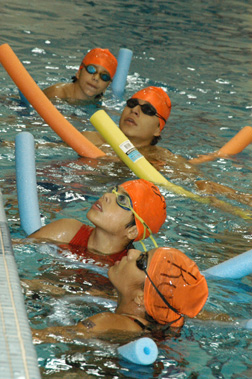 To illustrate the extraordinary nature of our dream, and to demonstrate just how much our athletes have achieved  — how "on another planet" they are — it is imperative to give you some hard data about where the children live. If a person is from Oaxaca, adapting to this postmodern world is very difficult and painful. When it comes to sports, the State of Oaxaca ranks last in Mexico. Oaxaca’s indexes of unemployment, corruption, and illiteracy are the highest in the entire country. Concepts such as placing garbage in the right places and stopping at the red light are foreign to many. Nevertheless, our children are the leading athletes in Mexico, practicing the complex discipline of triathlon.

The development of mental abilities was our focus initially and continues to be one of our main areas of concern. We gave emphasis and priority to the ego defense mechanisms that could better help in the adaptation to sport-related activities and to the demands of this changing, complex, and globalized world. In other words, we are trying to teach how to be a champion.

Beginning on the first day of the camp, each child shared the dreams of 80 other kids, each one with a different degree of commitment, different objectives, or a different dream in itself. The camp took place at Bucknell University. Their 50-meter indoor pool with a diving well more than met our expectations. The Head Coach of the University and the school’s assistants wore T-shirts with the logo "ATTITUDE TO ACHIEVE." The leader of the Go Swim band, Glenn Mills, and his colleagues Barbara Hummel and Judson Aungst, were ready to direct a five-day camp with the total commitment of swimmers and coaches. 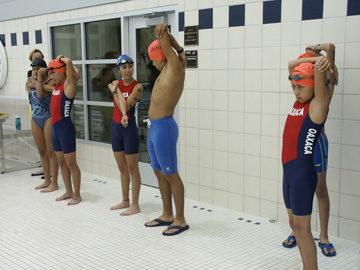 The camp offered an intense learning process, with three pool sessions and one dryland session each day. The focus was on how to experience several aspects of technique and sensitivity interacting with the water. We practicing abilities in the 50-meter pool in the morning and emphasized specific points in swimming during the afternoons and evenings at five different "stations," each one specialized in subjects such as fast turns, diving, etc. It was important for the children to experience the ambiance, which was not foreign for them. They were able to see that, as children of Oaxaca, Mexico, they were from the same "planet" as the other swimmers. Sometimes what they experience in Oaxaca does not belong to the team culture, and they become foreigners in their own land. In the camp, they saw many young swimmers (and coaches) who live life with passion and courage and others who do not want to stay behind.

One girl who participated in the swim camp also experienced what it means to swim for a University team. She had the chance to sense the commitment to training that is necessary to succeed at this level. She wrote: "At six in the morning, everybody was on time, bringing all the necessary equipment for training. Nobody talks or tells you something because they all are concentrated and focused. Every practice has long- and short-distances reps, high-and low-intensity swims, and technique drills. The coach speaks only when it is necessary, motivates you when needed, and invites you to meet the goals. Each one is responsible for her learning process, commitment to the practice, and searching for answers. The practice is an example of a high degree of attitude, commitment, and personal responsibility to reach one’s goals."

On the last day of camp, the competition and the formation of the team at the camp took place. It brought another piece of the planet where the children from Oaxaca live. The team is all and everybody needs to work for the team. Everybody should give his/her best shot for the team. Spaces for the lazy ones do not exist in the culture that creates champions. Salvodelli, Lance Armstrong’s teammate and winner of Stage 16 of this year’s Tour de France said: "For sure, it was not easy being a team mate because I had never done it before. But it was made easier by the simple and obvious fact that Lance is the best." I believe that these children internalized what a team is and identified themselves with the team that creates champions, instead of stopping the train to stay in a comfortable zone. In a planet where in theory everything is possible, it is important to have priorities and objectives well defined. It is very easy to loose track and opportunities.

The experience for the children went beyond the camp when, after the camp, they shared time with Glenn Mills and his family. A child mentioned: "Everybody helps in the family. They share things with each other and there is no envy if somebody is successful, I saw the opposite of what I am used to. They tried to be efficient organizing activities together during the day, as it is the time to exercise and to do chores around the house. They share games and moments."

There is no ideal planet, but there are planets that allow one to be successful. When I returned to Mexico via Mexico City, I had to cross the monstrous City before traveling to Oaxaca by car. It was like returning to the ghost planet. Who is taking my place? Who does not want to make the line? The police stopped us. As usual when they see a van, they see an excuse to get money. It is difficult for me to understand the fear of the people toward this kind of attitude. The planet where the kids live is real. But because of our training, and in part because of our three-week trip to experience another culture, the planet of Team Oaxaca has the hope that life could be better. The children have the idea that civility does not depend on money but on the degree of people’s education — education based on mutual respect, responsibility, efficiency, and commitment toward objectives. Our children have walked a long journey. I believe as Salvodelli does: "Armstrong lives on another planet." The capacity to give creates another rhythm.