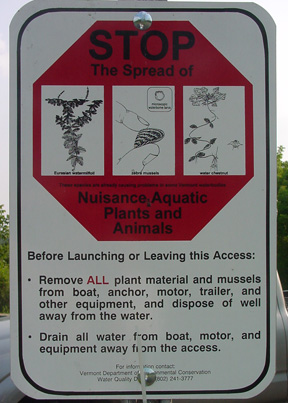 Last month, I participated in a triathlon in Fairlee, Vermont. The swim was three quarters of a mile in Lake Morey, a 2-mile-long lake, ringed with wilderness camps on the north end, and rustic lake houses on the eastern and western shores.

Six or seven hundred of us gathered on the beach at the south end of Lake Morey to await the start of the event. We went off in waves, by age group, so I had a chance to stand on shore and watch several waves of younger swimmers head out to the first orange buoy. It was a beautiful sight to see all those white-capped swimmers heading off into a sparkling lake. But if you looked closely, there was something very wrong with the picture.

About 20 yards from shore, a few swimmers had stopped and were thrashing their arms, as if trying to shake free from a swarm of bees. Most others kept swimming, but you could see that dripping from their arms were strands of greenish vegetation. When it was my turn to go, I porpoised across the sandy bottom, then launched into the deeper water. I took a few strokes and then… ughhh. With each stroke, my hands plowed into long strands of green, weedy STUFF. It was caught between my fingers, and was snagging on the sides of my goggles. I felt it slither around my exposed ankles and toes. I kept swimming, but the weeds seemed to be clinging to me. At one point I started grabbing them as I extended each hand, and used them to pull forward. I thought, "So this is what they mean when they tell you to anchor your hand." 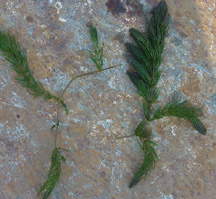 After 25 yards or so of fighting through this mat of weeds, I broke clear and enjoyed the swim, until it was time to swim back through them on the way to the finish.

What we were swimming through was Eurasian watermilfoil (myriophyllum spicatum). It’s a nice-enough looking plant, but it doesn’t belong here. It’s what’s called an invasive species, something that grows in a balanced way in its place of origin, but tends to take over when introduced in an area where it has no natural predators or biological controls. In swimming terms, it’s a total lane hog. After a while, nobody else wants to swim with it — or CAN swim with it. Eurasian watermilfoil is native to Europe and Asia. It is NOT native to the United States. But many decades ago it was introduced to the United States, in large part through its use as a decorative plant in aquariums. When people dumped out their aquariums, so the story goes, Eurasian watermilfoil began to take up residence in America’s lakes, ponds, and waterways.

Eurasian watermilfoil is extremely difficult to control because it has no natural enemies here in the United States, and because it reproduces rapidly and by a process called fragmentation. A one-inch piece of Eurasian watermilfoil, caught in a boat’s propeller (or on a triathlete’s goggle) and carried to another lake, can infest an entire lake within two years of introduction. When it gets going, this weed forms an extremely dense mat of vegetation near the surface of the water. It can put an end to swimming, fishing, boating, water skiing, and all other enjoyable aquatic activities. It chokes out the native plants and, when they can’t grow, other aquatic creatures that rely on the native plants have trouble surviving. It’s a downward spiral. And it may come to your favorite swimming hole if you and your neighbors don’t take preventive action. 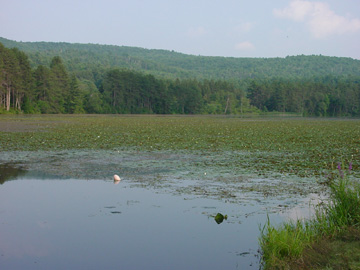 There are no easy — or inexpensive — ways to get rid of Eurasian watermilfoil once it gets started. You can use chemical poisons, which don’t last and which tend to kill the good, native plants. Or you can put on SCUBA gear and go pull it out by the roots. That’s what a dedicated group is trying to do in this pond, near where I live. You can see how successful this effort has been. A lot of the surface matter is water lilies, but there’s Eurasian milfoil all over the pond. This stuff grows so fast, and it takes such a small fragment to start new growth, that it usually comes right back after you pull it out.

I am writing this article simply to raise awareness. Eurasian watermilfoil exists in nearly every state, and it is still readily available at pet stores, aquarium dealers, and over the Internet. 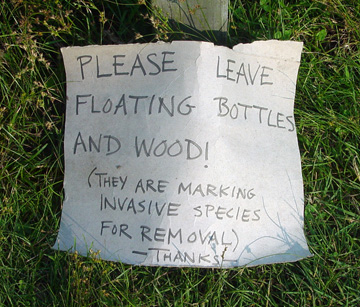 Prevention, however, is the best way to stop the spread of an invasive species. Learn how to identify it. Remove all plant materials from your goggles and wetsuit (and YOU) BEFORE you leave your swimming hole. If you use a boat or other flotation device, remove all plant materials before you leave the area and wash everything down with hot water when you get home. This goes for fishing tackle, too. And your ankle chip if you are a triathlete.

Go Swim — but don’t pick up any hitchhikers!