One of our regular students sent me a note this week about a friend of his and an accident. Last week, Chris Berkley broke his neck at a local pool. He has a compression fracture of the C-6 vertebra. According to his Mom, Chris is walking, but has some weakness in his left hand, a condition that the doctors say will improve with therapy. Chris is expected to go into surgery in the next couple days, and we all hope and pray for his speedy recovery. The following is the note from Eric with a bit more info about Chris. 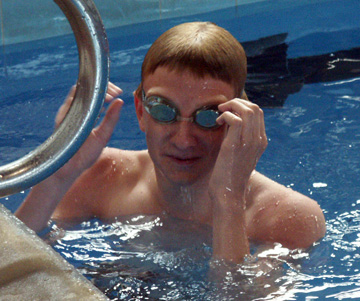 Chris loves to swim, and when his club team is off from swimming during the winter he practices at the YMCA in Kingston. During the summer of 2004 Chris attended the Go Swim camp at Cornwall, New York. In his free time he loves to hang out with his friends, bike all over New Paltz, and download and listen to music. And he loves his time in the water. 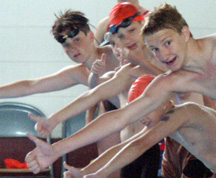 Chris had a pool accident on August 26th at the Moriello Pool where he works as a lifeguard. Chris broke his neck in the accident. So now he’s at Vassar Hospital in Poughkeepsie, New York. I am asking all swimmers to send a card to lift Chris’s spirits. It could be just a little note or a letter. Anything that will cheer his spirits, so that he can have a speedy recovery.

If you are willing to send him a card or letter here is his home address:

We’ve also gotten ahold of Chris’s email, and since it’s a Gmail account, we know it can hold a LOT of mail… so don’t be shy about passing tihs note around and getting swimmers from everywhere to send him a note of support.