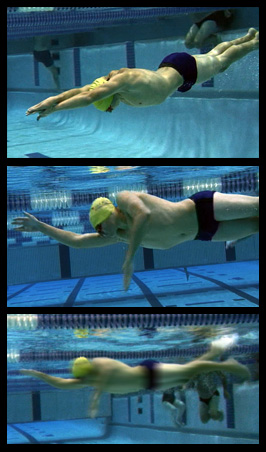 Most really lazy swimmers do everything possible to avoid swimming. They sometimes give the longest possible pushoff, so they can travel as far as possible down the pool, and thus, be much closer to the other end.

While in theory this makes sense, most of these swimmers lose too much momentum during the long streamlined glide. If you glide to a stop…or glide just a bit too long…then you have to overcome INERTIA when you try to reaccelerate in the middle of the pool. Those of you who have tried THAT trick KNOW there’s nothing lazy about it.

When you push off the wall, you’ll have more speed than on any other part of the length. If you glide to a halt, you lose all of that speed and momentum. If you initiate your first stroke and breakout while you’ve still got some speed left, you will MAINTAIN that speed, and carry it into your first few strokes of swimming. That speed translates into easy distance and it will, in essence, shorten the length FAR more than just a lazy push off will.

Be really lazy. Initiate your first stroke in freestyle a bit earlier than you think you should (that is, if you’ve read the other Lazy-Swimmer articles and now have a GREAT streamline as well). Your first stroke will feel lighter and easier, and will help you maintain more speed for a little bit longer period of time.