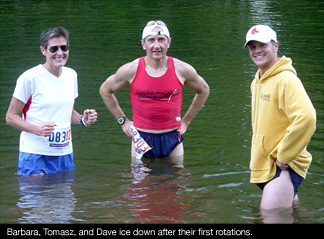 Last weekend I had a chance to participate in two group efforts that brought home – once again – the importance of getting outside yourself and getting involved in something where the goal can be reached only with the help of other people. I’m not saying I’d want to do this EVERY weekend, but sometimes I need to take a break from my personal goals, my boring aches and pains, and my own little world of personal training and racing. After a lifetime of competing as a solo swimmer and runner, I find it energizing to get away from myself and into something where I’m only a small piece of a larger puzzle.

You couldn’t find a more perfect Group Effort than Reach the Beach. I wrote about this 208-mile adventure relay a year ago, after completing it in the pouring rain with 11 other members of Team Go Swim. I didn’t think anyone from our 2004 RTB team would want to repeat the experience in 2005, but six of us did. There’s something about this whacko event that keeps you coming back for more. It’s a bit like Outward Bound, a bit like Survivor, and A LOT like a great college road trip. What could be better than spending 30 hours in a van with 5 other friends, living on Endurox and chocolate chip cookies (with no weight-gain worries ’cause of the 20 miles you’ll run), and traveling past some of the most stunning scenery on the planet?

OK. So what if the van did become a HazMat zone after our first six runs and after I spilled a bottle of Endurox all over the back seat (guys, I confess it was me)? And so what if it was pitch black and raining when we passed most of the scenery? And so what if we were popping Ibuprofen and aspirin just to be able to walk? It sounds pretty grim, but the funny thing is that we were having a blast. We were a team. We had a mission to reach the beach. And the pain, rain, and lack of sleep only brought us closer together. 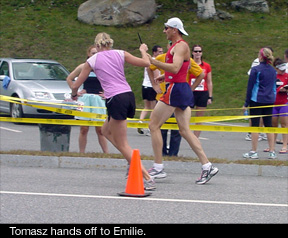 What I love about this race is that it’s not about you. Even when it’s your turn to run, it’s not about you. It’s about completing your part of the picture so that the entire team can achieve its goal. It’s about overcoming whatever obstacles are in front of you or inside you, so that you can cheer on the next member of your team. It’s worrying about their blisters and not yours because their blisters might keep your team from reaching its goal. This is a liberating way to compete — especially in a sport like running, where its so easy to become solitary and self-absorbed.

Swimming is another sport where it’s all too easy to get wrapped up in the pursuit of individual goals. Staring at that black line for several hours a day can certainly narrow your outlook. So on the day after Reach the Beach, sore but still riding a group-effort high, I decided to I head to Mascoma Lake, NH, to take part in a group effort of the swimming variety. My Masters team had scheduled an informal group swim of about 2 miles. I hadn’t planned on attending (I had no intention of subjecting myself to 70-degree water the day after running 17 miles), but something about the RTB experience made me want to try to capture the same thing with swimming. I just felt like lending a hand as a kayaker, so that the seven swimmers who showed up that day could have a safe swim. 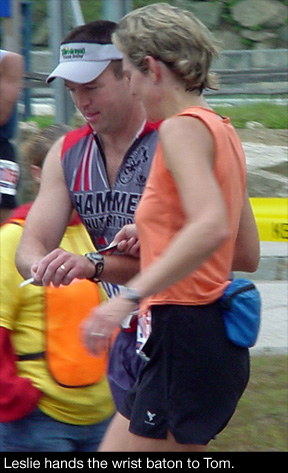 It turned into a wonderful outing, and another group effort. Rick offered his house as a launching point and his pontoon to get us to the far end of the lake. Various significant others were there to provide moral support and hot tea. John, a second kayaker, shadowed the faster swimmers as they took off down the lake. I brought up the rear, providing support to the other four swimmers, one of whom was a young age-group swimmer bravely attempting her first-ever lake swim in some very chilly water. The swimmers in the two groups modified their pace to stick together. Nobody was racing. Everyone was working together to swim the 2 miles back to the dock. The whole event just worked. We were a dozen swimmers looking after each other, working together to reach a goal. It was a memorable day.

I have to do this more often. Thanks again to all the people who made last weekend so special. 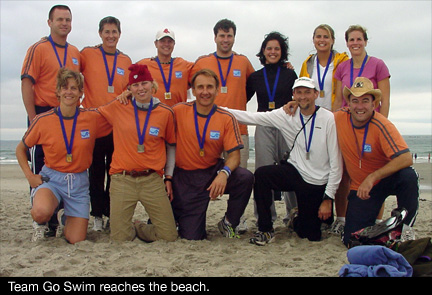