I’m going to preface this article by saying that I understand the importance of "team." Without the team members I trained with on a daily basis, I would have never been very good. Their constant challenges, instruction, and motivation kept me going. This article has more to do with the actual athletic event, or competition. Rather than immediately arguing about the support a team gives, read this with the understanding that I’m thinking of athletes who have given EVERYTHING in their preparation, and who are sometimes surrounded by those who have not prepared enough. This is simply opinion, and feel free to disagree…heck I can’t even win this argument in my own office, so I know there will be 1,000 opinions. This just happens to be mine. 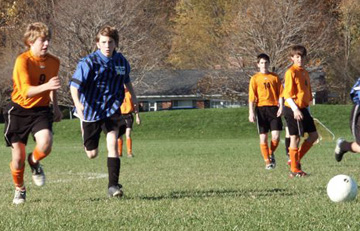 I had a conversation the other night about the pros and cons of individual vs. team sports. This came up after watching my son and daughter in a soccer game. The game was tight the entire way, with both teams hanging on to a 1 – 1 tie. With less that 15 seconds left in the game, the goalie on my kids’ team lost his footing, and the ball literally rolled past him to score the winning goal for the opposing team. While I’m not faulting the goalie or the team for letting the competition get TO the goal, I simply felt bad for my kids. After 60 minutes of extreme effort, especially on the part of my son, they came away with a loss.

While expressing my sadness for my kids, I said to the person next to me, "That’s why I love individual sports." My friend turned to me and asked what I meant. I stated that in individual sports, you’re rewarded for your efforts, and you have to take responsibility for your failures. My problem with team sports is simply that no matter what effort level you put in, you still depend on others who may not have prepared as well as you. You depend on others who may not take the sport as seriously — or who don’t take winning or losing — so seriously. 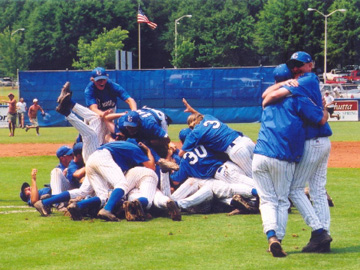 I completely understand that my kids are 13 years old and are competing in a recreation league. The most important aspect of the league is to teach the kids HOW to play a game and how to interact with teammates. Thirteen-year olds, however, still enjoy winning MUCH more than losing.

One of the arguments that came up from the team-sport perspective is the sense of accomplishing a goal together — that it’s much more fun to win as a team than as an individual. Of course, I think this argument comes from people who haven’t experienced the joy of winning something totally on their own. I don’t mean winning a running race against the kid next door, I’m talking about training for months, or years, and putting it all on the line for one race… and coming away victorious, or accomplished.

Of course, it’s great to have friends to share victories with, and I was usually surrounded by my training partners at all my competitions. The part I have a problem with is that, if you’ve done EVERYTHING you possibly can — from preparation to execution — in your event, and the people you depend on in your competition have NOT done the same, then you’ll ultimately be pulled down to their level, rather than being able to excel and win – or lose – on your own merits. I also understand that the prepared individual can pull the others up, but that would have had to happen in the preparation because, ultimately, people play to the level they’ve prepared to. 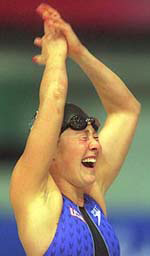 I’m not saying ANYTHING about the kids on the soccer field. Every one of them tries as hard as they can, and I enjoy watching how the smallest of kids square up against the biggest, and are not intimidated. They’re all great kids, and it’s fun to watch them compete.

As my friend and I continued our discussion, it was easy to see that we were never going to agree. My friend came from a team-sports background, and I came from an individual-sports background. He stated that even MVPs have bad games, and the team still wins, so it’s not all the time that the team pulls the stars down. Sometime the team lifts them up. I said that it’s too hard to compare sports so simply and that a properly prepared individual athlete will fulfill his or her destiny 90+% of the time, while teams will rarely reach that level of success.

I decided to check on my favorite all-time football player. This is a man I watched for years, and who is arguably one of the greatest players of all time. Again, I understand this is a very narrow view, but it certainly supports MY side of the issue…and well… since I’m writing the article…I get to use it. 🙂

Barry Sanders of the Detroit Lions played in the NFL for 10 seasons. In those 10 seasons he rushed for over 1,000 yards in each of those seasons. He was the NLF Player of the Year twice (’91 and ’97). He was a 5-time NFC Rushing Leader and a 4-time NFL Rushing Leader. In 2004, he was inducted into the NFL Hall of Fame. Through all that success, his team’s winning percentage was .488%. I don’t care WHAT book you look at…that’s losing. 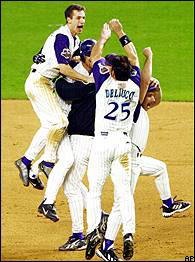 Let’s now imagine what this meant for Barry Sanders. Everything he accomplished, he accomplished with a losing team. Can you imagine how GREAT Barry would be if the players he was surrounded by were as good as he was? His greatness is magnified when you realize that his support wasn’t so good as that of other players, and that he gained his greatness due to dedication, work, and tireless effort. Can you imagine how great he’d be if he was still playing today? But Detroit’s unwillingness to allow him to be traded after 10 years of loyal play for a losing team caused him to simply RETIRE from the sport?

While I certainly am not claiming to know anything about football, or the effort level concerning the players around Barry, I’m sure they all did their best, and were incredibly gifted athletes. I’m only saying that I bet Barry Sanders was ultimately FAR better than we can ever imagine. But we’ll never know.

On the individual side of the equation, athletes look down the lane, whether it be in swimming, running, triathlon, archery, tennis, race cars, whatever, and have to perform all by themselves. If they trip, run into the lane line, crash, or hit the ball past the baseline, it’s up to them to recover, recoup, and try to fix the situation. If everything goes as planned, which is USUALLY what happens with a properly prepared athlete, they’ll achieve a level of success commensurate with the preparation they’ve put in. The properly prepared athlete will USUALLY be successful, and doesn’t have to worry whether the third baseman makes the catch and throw to decide THEIR future.

Finally, my friend asked about my swimming career at Alabama. If I swam bad, and the team won, was I still happy? I said, for my friends, but not for me. I ultimately failed and I didn’t support anyone’s best interest. The next question was, if I won, and the team lost, did I really still feel happy. I said YES. He was visibly confused by that answer, and seemed to give me the impression that it was a selfish act. 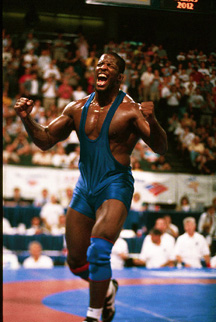 That’s the beauty of individual sports. There are certain times when it’s ONLY you. In swimming, there is one specific meet to focus on for this, Olympic Trials. Simply put, there are no team scores at Olympic Trials. This is where MY perspective comes from. While dual meets and conference championships were fun, ultimately, my goal was to make the Olympic Team. While this may be seen as a selfish act, we’d have to apply the same label to all the swimmers who have decided to turn pro, rather than represent a school, or college. I don’t see these people as selfish, but rather, being responsible for their future. That falls more along the lines of maturity.

I guess I just didn’t see the same satisfaction on the faces of the kids after the soccer game. I didn’t see the signs that they felt properly rewarded for the effort level they put in, and that’s why I remarked, "That’s why I love individual sports." In individual sports, you can’t hide behind you teammates, you can’t depend on anyone else during the competition. You reap what you sow, and if you’re properly prepared, MOST of the time, you’ll do what you wanted to, and can walk away with a great feeling of satisfaction that you did a great job.

Simply put, I think individual sports do a great job or teaching kids to take responsibility for their actions, and to understand the direct relationship between work and reward. Those who play team sports and THINK like an individual sports person, are usually the best players, the standouts, the stars. And when you get a bunch of those people together, NOW you’ve got a team that will dominate, not depend.

Ultimately, by looking at the pictures on this page, you simply can’t judge joy. Individual victory, or team victory isn’t any sweeter than the other. In my opinion, you simply have a better chance of achieving your desired results if you don’t have to depend on others.