For the past 3 years, I have worked as an assistant coach for a USS team in Lebanon, NH. One of the most fun aspects of the job is that I am responsible for the group that we call The Rookies. These are the kids — ranging in age from six to ten — who want to be on the swim team but who first need help (sometimes LOTS of help) with their strokes and with learning the ropes. What I love about this group is that they are on a perpetual learning curve, and they bring an incredible amount of energy to the task.

Our 2005-06 season started this week, and on Tuesday afternoon I met the season’s new contingent of Rookies. We have 14 this year — 7 boys and 7 girls — and as we gathered in "the Rookie corner" I had one of those moments when your entire life flashes in front of you. This wasn’t the bad kind of flash, like when 7 tons of scaffold is about to fall on your head. This was the good kind of flash, when you see how everything you ever did is coming together to create something special.

As I surveyed this crew of excited kids, some dressed in their new team suits but most wearing an assortment of flowered suits, baggy shorts, and goggles with little fishes on the frames, I thought back to when I was eight and had one of those bathing caps with a snap strap under the chin. I thought back to how excited and proud I was to be a member of the local YMCA swim team. And I thought back to all the friends I’ve made through swimming  — all the experiences and travels and life-changing moments the sport has given me. And it suddenly hit me that these 14 kids had all this to look forward to and this was their first day of the journey. And I felt very lucky to be the one assigned to help them get started.

The first thing I do with every new Rookie team is talk about the Yellow Cap. "Has anyone ever heard of the Tour de France?" I ask. Hands go up. "Right — Lance Armstrong. Does anyone know about the yellow jersey?" Not so many hands go up, but they all get the concept when I explain it. And they definitely get the concept when I hold up a bright yellow cap and say that in the Rookies, we have the Yellow Cap. And each week, the yellow cap will go to the person who’s not the fastest, but who pays the most attention, or does the best job, or tries the hardest, or makes the most improvement. And sometimes you might get the yellow cap just because it’s your birthday. 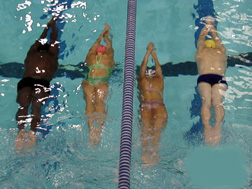 With the Rookies, I like to start each session by showing them one of the Go Swim photos of the week. I ask them what they notice about the swimmer, or what they think the swimmer is thinking about. Since this was our first session, I wanted to work on something that was basic and simple — and critical to everything in swimming. So I printed out the photo that you see here. Before I showed them the photo, I asked if anyone could tell me what was THE MOST IMPORTANT THING in swimming. Half a dozen hands went up. I’m thinking streamline…speed…big kick…something having to do with swimming. I nearly melted when the first answer, phrased as a quiet question, was, "That you should support your team?"

"That you…you…shouldn’t…um…like laugh when one of your friends loses a race" came next.

"That you should always think about safety first when you come to the pool," was the third.

"That you should be safe and have FUN!" was the next answer  — this one loud and clear from the little guy in the back row.

I was thinking to myself, "Is this great, or what?"  "Could this be the start of the all-time BEST rookie season ever?" 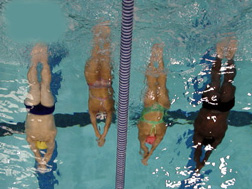 When I finally showed them the photo, no one said STREAMLINE, which maybe says something about what gets emphasized in Red Cross lessons. "That they’re gliding," was one answer. "That they’re having fun" (guess who?). "That their heads are down" was another. I asked them to try to look like the kids in the photo. The other coach and I tested their streamlines. I flipped the photo upside-down and asked, "Does it make any difference which way we look at it?" They immediately corrected their feet. They were getting it.

So then we got in the water and practiced streamline jumps and streamline pushoffs and tried to learn each other’s name and start the whole wonderful process of becoming a team. I always look at the Rookies as the foundation of our swim team. The stronger the bond these 6- , 7- , and 8-year olds can make, the stronger our team will be in future years.

I gave the cap to Anna, who had one of the best streamlines I’ve EVER seen, regardless of age, and we all applauded and gave high 5s and launched ourselves into a new season.