← What It REALLY Takes

Last Saturday I attended my first-ever diving competition. No, I haven’t switched sports. I was watching my 13-year-old stepson compete in HIS first-ever diving competition. I had braced myself for a totally long and boring 5 hours of bleacher burn. In my backpack were back issues of Swimming World, Runners World, Inside Triathlon, and other assorted magazines and mail-order catalogs to keep me occupied throughout the morning. Turns out they all went unread. The action on deck was too good to miss. 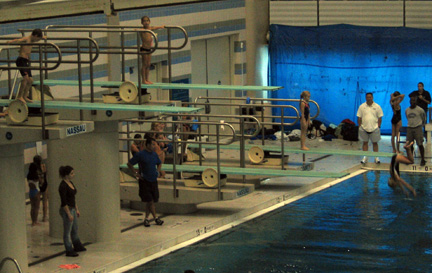 The event took place at the Long Island Aquatic Center in the heart of Nassau County, New York. Originally built to host the Goodwill Games, this fabulous facility has been used for various high-level competitions including FINA world-cup, NCAAs, and NY State High School championships. I’ve attended many of these competitions, and have always focused on the 50-meter part of the facility. On Saturday, however, I focused for the first time on the diving well. Wow. How could I have missed this? Two one-meter boards, two three-meter boards, and a tower with platforms at 1, 3, 5, 7, and 10 meters. The bottom is painted a deep midnight blue, with the lane lines in white — to help the divers get their bearings as they flip and twist through the air — before plunging into the 17-foot depths. 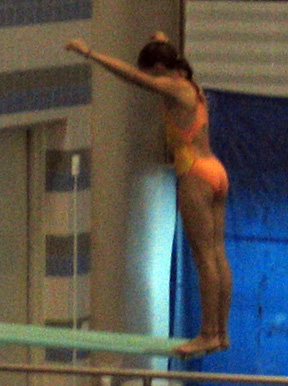 Based on my experience in attending age-group swim meets, where you see some good swimming and a lot of BAD swimming, I was prepared to witness a lot of BAD age-group diving. I couldn’t have been more wrong. These kids — even the 9 and 10 year olds — were all worth watching. What impressed me was how fit they were (not a chubby kid among them) and their impeccable posture. And their level of body control and focus was awesome. They would climb onto the board, adjust the wheel, take the classic divers stance, and then FOCUS on what they had to do. It was as if they went into a trance. You could see the wheels turning as they visualized every twist and turn before take off. And then they executed.

I couldn’t help but compare the level of focus of these young divers to the level of focus — or lack thereof — that I see in many young swimmers. It seems like too often at age-group meets, I see kids step to the blocks without that look of total focus and concentration. More often, what I see is nervous energy that gets released into frantic, uncontrolled swimming. Makes me think that part of a good coaching program is more time spent on teaching kids how to visualize their races — in the same way that divers visualize their dives. Maybe it’s worth devoting some practice time to helping kids learn to settle their minds, and to think about things like how they will control their body on the start and breakout — where they want their feet to land on their flips, how close the bottom will be on a good pulldown, how fast to take it out on the first 50. Watching these divers made me realize that even 8-, 9-, and 10-year olds can learn to visualize. Maybe we need to do more of this in swimming. 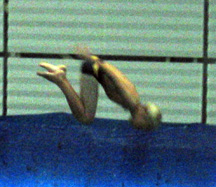 One other thing that I found interesting at this meet — and I’ll just throw this out to maybe generate discussion on this website — is the fees that the divers had to pay. My stepson did four total dives — FOUR DIVES — and each one had a $23 entry fee. In addition, he had to pay a meet fee to his coach of $60. I don’t know if it is standard in diving for each diver to pay his/her coach to attend a meet, or if this is something peculiar to my stepson’s coach, but wow, what a concept! There were at least 10 divers from my stepson’s team who attended this meet and had to pay the fee.

← What It REALLY Takes