The A,B,C,D,F grading scale is a straightforward system — an easy way of recognizing where you fall on a letter scale. You feel good about an A, and have some explaining to do when you get an F.

I remember earning quite a few Cs throughout my academic career. When I say "earned," I mean EARNED. All of the Cs that I got were from a genuine lack of effort. Those Cs were as important as the As. They were a way of letting me know that the effort put forth to produce a C was just average, not great. The As that I got were truly earned.

But whatever happened to that grading scale? Today’s kids are the most graded in the history of the world — but are they being graded…or simply rewarded?

The other day I was having a conversation with three of the kids (swimmers) that I work with. I asked "How many of you have all As?". All of them raised their hands or made a similar affirmative signal. Then I asked "What grade do you get when you know that you really didn’t put forth your best effort?". Again, all of them said they get As. So for these kids, in school, there’s no real distinction between the reward for a average effort and the reward for an outstanding effort.

I am not saying that it’s wrong for them to get As for less than great work. After all, this is the system that we have built for them. High School As lead to more opportunities for great colleges. If they want to get into the higher-level schools, a C anywhere on their transcript will kill that. The problem I have with the system is "Where can you go if A is average?" 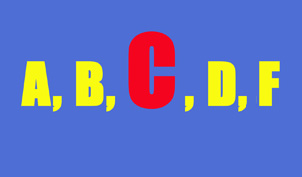 To get an A in practice you have to earn an A. The average grade is somewhere between a D and C. To get an A you have to perform to the time standard while holding your technique, and setting yourself up mentally to do your best. All three of these in combination will EARN you an A. You will never just be GIVEN an A.

One of the girls had to hold between 1:03 and 1:05 on the entire set. I was expecting the complaining and "can’t" attitude to rear its ugly head. What happened was truly remarkable. She took the set as a challenge, which was the intent of the set. From number one she told herself that not only could she do it, but also she could do it to the best of her ability. She went 1:03 on all of the pace 100s and right around 1:00 on the fast ones. Until the last one, that is, when she rolled her sleeves up and got dirty. She went 1:00 on a 1:05. Then with only five seconds rest she went 1:01. With a little break before the last one she went :59.

This was the first time that she realized what she was capable of achieving when three very important things come in line for her. First and probably most important was that she went after it right from the start. She mentally prepared herself to succeed before she swam a single length. She was so into succeeding that she wouldn’t hear the complaints of the other swimmers who said that it couldn’t be done. Second she has recently switched her stroke to more of a straight-arm, ballistic recovery. This change has taken place only over the last month or so. She held the recovery for the entire set. Last, she was able to meet and exceed the time standard that was set. She did what her coach asked, and then a little more.

For her efforts she was awarded the first A on a set. There is still work to be done before she can EARN an A on the whole practice. In order not to discourage her I did award her an A- for the practice.

Greatness starts in small ways. Start with just one thing great in practice. Pick something you know that you can give a solid all out effort on. My advice would be to start with all of your streamlines being to the best of your ability. Then start to build from there. Pick a set where you want to perform a certain technique goal, and do that to the best of your ability. Once you have mastered that, pick a set, just one in a practice, that no matter what happens you are going to go all out while holding your technique together. Then next thing you know you are doing this on every set for a whole practice. Then it is every practice of the week, and every week of the year. Next thing you know you are truly setting your own course.