It was impossible to watch Sportscenter this week without hearing the same story over and over. TO (Terrell Owens) has been suspended from the Eagles organization indefinitely, for conduct unbecoming of the Eagles organization. That’s lawyer speak for no one can stand to be on his team. I don’t know why this is such a shock. Let’s track TO’s steps back a few steps.

Terrell Owens, the gifted, talented, and young receiver for the San Francisco 49ers, openly criticizes future Hall-of-Famer Steve Young. No doubt Steve Young was at the end of his career and might not have been as sharp as in the past. When Steve Young retired, Jeff Garcia got the job of throwing the ball to TO.

According to TO, Garcia is now the reason why TO is not doing better. No mention of the team. TO even went so far as to pull Garcia’s personal life into the media focus. Due to a filing error on the part of TO’s agent, the 49ers were able to dump the TO headache, and thankfully did. Not because he wasn’t a fantastic player with skills that may never be matched. Solely because he was a bigger distraction than his talent was worth. 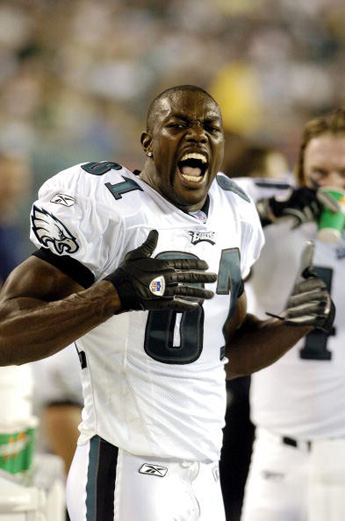 The Baltimore Ravens were quick to jump on the TO train and offfer him a big time salary. TO agreed to the offer by the Ravens, and it looked like a done deal…until TO said he would never play for the Ravens because they were "Losers." The Philadelphia Eagles organization became the front runner for the TO headache. If there is an organization that puts team first over individuals, it is the Eagles. So it seemed a perfect fit for one of two outcomes. TO acquiesces to the good of the team, or TO remains TO.

After one excellent season, TO started the offseason with a bang. TO demanded a renegotiation of his contract, because he believed he was being ripped off. He was sent home from training camp for a week. At this time it was revealed just how smart the Eagles organization is. They put a conduct clause in TO’s contract that would negate his contract if he couldn’t conduct himself like a professional. So here we are and TO is sitting for what sounds like the rest of the season.
So now all of you are saying, who cares…this is a swimming website. This seemingly has nothing to do with swimming whatsoever. Or does it?

The events that were recounted in this article were things that are known only from paying attention to the national media for the past few years. TO is not three years old. TO did not come to be the easily suspendable, me me me player he is today in one night. TO was created by whatever his environment was/is.

The reason we know why TO exists is because of his prowess on the football field. He has no equal. He didn’t get to the pros by himself. Along the way there had to be a coach who introduced him to the sport, Most likely a coach who refined his skills and taught him the ins and outs of the game. A college coach who prepared him for the professional level of the sport. Did no one along the way see the person behind the athlete? Was it easier to look at how good he was than to question the person he was? So the question that begs to be answered is, are coaches responsible for more than just teaching the rules and skills of the sport? This includes football, basketball, squash, trampoline, and yes even swimming.

Recently we have instituted an anti-TO-syndrome rule in our practices. It has absolutely nothing to do with the sport of swimming and everything to do with the conduct of the swimmers while they are in the pool. The new rule is easy to follow. If anyone tells any other person that they are stupid, an idiot, plus worse that can’t be written, then they get one warning. The next time they break the rule, they can get dressed because they are done for the day. This is an out-of-character move for me to implement. It just got to the point that I couldn’t stand hearing it. Furthermore, half of practice became refereeing who was stupid, or an idiot. When the rule was put in place it seemed that it was only a conduct rule. Now it is apparent just how much conduct is a part of the sport. Poor conduct on any level in any sport is a detriment. It screams of selfishness, and it is a distraction to the task at hand. Any time committed to off-task topics that are negative is time wasted.

In my opinion if you are working with kids, start now. What they are seeing of professional athletes, not all just the ME players, is not conduct befitting of themselves. As coaches, we spend valuable time with parents’ children. It is part of our job to make sure that time is not spent in vain. Character and conduct are important parts of sport. Coaches, don’t let your kids grow up to be TOs.