In the 1960s, when I was an age-group swimmer, I swam for the Cleveland Swim Club and our coach was a young man named Bob Busbey. The guy knew his stuff; in 1964 he was named as an assistant coach for the US Olympic Team. Bob was a demanding coach, and worked us relentlessly, with almost no rest between repeats or sets. But on the rare occasions when we did get to recover, he had us do something called ‘bobs,’ and they felt WONDERFUL. Did he invent them? Could someone who excelled at creating tortuous sets come up with something so relaxing? I don’t know, but somehow Busbey knew that bobs were the perfect antidote to the workload he was giving us. They brought a total release of tension, and were a brief, energizing escape from coaches, teammates, and the pace clock. 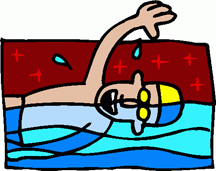 Bob’s ‘bobs’ were memorable, and I still like to incorporate them into my practices. But they always raise questions. Like…

What are ‘bobs?’ Bobs are a relaxed form of controlled breathing-a measured way to catch your breath and get your heart rate down between swims.

How do you do them? Bobs are really, really simple. The only way you can go wrong is to do them too fast. Just hang onto the wall with one or both hands. Take a relaxed long breath, sink your body and head under water, and do a full, relaxed exhale. Come back up, take another relaxed breath, and repeat. Take your time and don’t worry about the clock. Make your up and down movements – and your breathing — rhythmic and relaxed. The point is to relax your muscles, get control of your heart rate and breathing, clear your body of lactic acid, and focus on what you want to do better or differently on the next swim.

Why should I do them? The obvious benefit is that bobs help you regain control over breathing and heart rate. They can also help cool you down, because they require you to dunk head and shoulders into the cool water. A less obvious, but perhaps even more valuable, benefit is that they help you to center yourself – mentally and physically. If you dropped an Olympic biathlete into the pool, chances are he would do bobs to recover between repeats. Biathletes are the ones who ski all-out for several miles, then have to lie down and shoot five bulls-eyes with a rifle. They’ve mastered the art of quick, conscious control of their heart rate and breathing, and can turn that control into focused, targeted action. Bobs can help you do the same thing when you swim.

How many bobs should I do? It depends on how much rest you need. The longer or harder the repeat, the more bobs you’ll need in order to recover. You want to do enough so that you feel reasonably recovered but not totally fresh. You want to feel ready to accomplish what you need to do on the next repeat. Once you start a set and have taken your first ‘bob’ recovery, try to take the same number of bobs after each of the remaining repeats. The minimum number of bobs is usually 3 – enough to establish a rhythm, focus your thoughts, and make a difference in heart rate. A typical warmup or drill set would be 20 X 25, with 3 bobs as recovery between each 25. After the 3rd bob, just push off and GO. You will get more ‘in the zone’ if you go directly from your final bob into the next repeat. If you stand around too long after doing your bobs, or start chatting with your lanemates, it’s easy to lose your focus.

For a set of 50s, you might increase the recovery from 3 bobs to 5 or even 6 bobs. A set of 100s might call for 5 to 8 bobs, with 10 bobs being about the most you would need, even for much longer repeats. One set I like is to swim 10 lengths (250 yards), then 9 lengths, than 8 lengths, etc., down to 1 length. My recovery between swims is one bob for every length I’ve just swum (but never fewer than 3 bobs). You get the idea.

When do you do them? Bobs can be used effectively in all kinds of swimming sets and situations. My favorite time to use them is when I swim on my own. They help me achieve nearly Zen-like focus, which is especially useful when I’m trying to gain more efficiency in one aspect of my stroke. When I use bobs between swims, I feel as if I’m in a zone, or like a pilot in full command of every dial and moving part. Instead of looking at the pace clock, I look inward. Instead of thinking about speed, I think about ‘feel.’ Instead of trying to decrease my times or hold them steady, I try to decrease the resistance I feel as I slip through the water.

That’s the best-when you’re alone in your own lane. But you can use bobs in a team situation, too. The warmup/drill set is a good place to try them, because the repeats are usually short (25s or 50s), and no one gets way ahead of the other swimmers in the lane. Bobs can help ease everyone’s cardiovascular system into the aerobic/workout zone. If you do a set with longer repeats, it’s usually best if all the swimmers in a lane are roughly the same speed. If your lanemates swim at different speeds, you’re probably better off using the pace clock and a standard rest interval for this type of set.

Bobs are a fantastic way to end a practice. A typical set that I give my swimmers is 8 X 25 of silent swimming, with 3 to 5 bobs between each 25. This type of warmdown set will help you stretch out your muscles, bring your heart rate down gradually, and help you carry a sense of flow and control into your day.

That’s worth a trip to the pool. Go Swim!