A few weeks ago, Glenn posted an article called Swimming "Controlled Descend" Sets. It explained what these sets are, why they’re an important part of any training program, and what’s likely to happen when you try them. As Glenn pointed out, it’s exciting to watch an experienced swimmer attack a controlled descend set. They’re usually so tuned into pacing that their descend "window" is very small, e.g., they might be able to do a set of 10 X 100 and descend precisely one second per hundred, down to within just a few seconds of their best time. 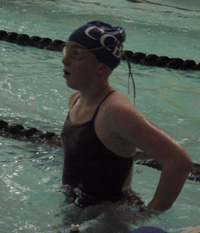 But, as Glenn also pointed out, it’s fascinating to watch an inexperienced swimmer try a descend set. Their descend window is usually either VERY WIDE (they tend to start to slow) or non-existent (all the swims are about the same, or the later ones are slower than the first one). Glenn calls this the hunt-and-peck method.

I have a particular descend set that I like to use with my Masters team. It’s kind of a test set for them, that we do every couple of months. Last week, I decided to try it for the first time with the age-group team for which I’m an assistant coach. It was a very revealing experience, and from on deck it felt like one of our better practices, ever.

The group consisted of 10 girls and 1 boy, ages 11 to 17. Some of them are purely recreational swimmers; others are quite serious and are at or near qualifying times for Age-Group Championships. At the end of the article you can see their ages, best-ever 200 free time, and their times on the descend set.

Here’s the set:
Five rounds (top three swimmers were assigned 6 rounds) of the following:
1 X 200 Free, except that the 7th length is Backstroke. Count strokes per length.
4 X 25 Free at stroke count minus 2 (stretch it out) Do 5 bobs as recovery after each 25.
Descend time on the 200s. Use the 25s as active recovery. No particular sendoff on anything. Go as soon as you feel ready after the 4th 25. 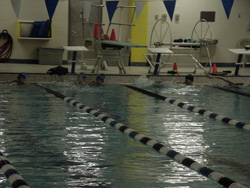 I like to throw in that Backstroke length to shake things up a bit and so this doesn’t become a mind-numbing set of Freestyle. Plus, the Backstroke length gives them a bit more air and allows them to hammer the final 25 of the 200. At least that’s the theory. I like to throw in the 4 X 25s because they help you stretch out and regain good form between 200s. This is good for swimmers new to descend sets, because it gives them time to regroup between the efforts that count.

About half of the swimmers, including one of the more experienced swimmers, went too fast on the first 200. We don’t do a lot of descend sets (and it’s a major effort even for them to get their times on any swim), so this was to be expected. It was interesting to watch them do their recovery lengths and recovery bobs. When I give this set to the Masters, they milk those stretch-it-out 25s and bobs for all they’re worth. They take their TIME with them. The kids, however, were bouncing up and down as fast as they could to get through the bobs. At least that’s what they did on the first two rounds.

After the first round, I believe most of the swimmers thought they could get away with not doing the descend part of the assignment. They thought that since they’d blown it by going to fast or by not getting their time that the descend part of the set was over. But I didn’t let them off the hook. (And if you try this set with your own team, the outcome depends largely on how involved YOU are as the coach.) We were in 3 lanes, on 3 different ‘sendoffs’ and I started working like crazy to get everyone’s times and actually RECORD them on a sheet of paper. They knew I was serious, and they suddenly started to get more serious. I must have said, "Come on, you can DO IT" a hundred times during the set.

And they did it – at least most of them. I told the ones who took it out too fast that they had to pull it together on the 2nd and 3rd 200. They had to get a descend going. I didn’t care if the descend was only one second – just do it. By about the 3rd round, I noticed that the bobs were getting longer and deeper. The 25s were looking slower, with longer strokes. I saw swimmers hitting the water bottles. They were really trying. I started to give them a little longer rest after the 4th 25, so they could attack the next 200. 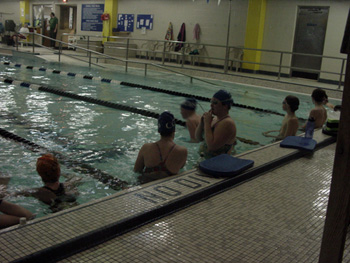 The three fastest swimmers were doing well with the descend and were really working hard. I was giving them target times on each 200 and they were hitting them. After the 4th 200 (they were assigned 6 X 200), I gave them each a ‘get-out’ time. If they hit the target time or better, they didn’t have to swim the sixth 200. This is the first time that I have ever given them a get-out swim, and they were a little unsure of the rules. "What if we are one second over the time," they asked. "Then you have to do six," I said. They gave each other a bunch of full-fist High 5s to get psyched up and then took off on their fifth 200. It was truly exciting to watch. They were tearing up the pool. The lead swimmer went 7 seconds off her best 200 free time. The other two were 10 and 12 seconds off, respectively.

The other surprise of the night was the lone male in our group. This is the kid I wrote about in Slow Down. Since that episode, he and I have gotten along really well, and he has been working like a tiger. This is his first year of swimming, so I was impressed with his descend effort, which turned out to be a ‘hold steady’ effort after a too-slow start.

We will try this set again. I really liked the way the swimmers in each lane worked together and encouraged each other to keep getting faster and faster. Fast is fun to watch.