Each year, a group of friends of mine like to ring in the new year with a nice swim. ABC, which stands for the Annapolis Breakfast Club, is a group of dedicated and fun Masters swimmers whose main objective is to have fun, and swim across the BAY! 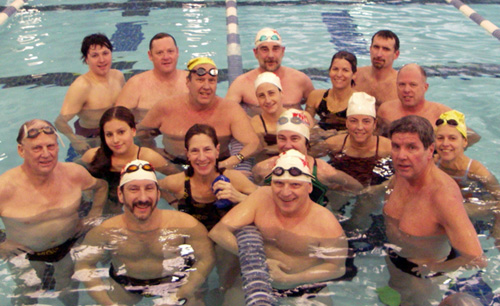 While it’s hard to pinpoint WHO the leader of the group is (each day, a different person creates the workout), Maureen has become famous for this kick-off-the-year swim. The Marueenavator features an ever-growing number of 100s, which coincide with the new year. While this type of thing is done all across the globe, I would hazard a guess that this group has as much fun doing it as any.

This year, I thought it would be a good idea to involve a couple of the kids I work with IN the Marueenavator. The ABC group welcomed them (and me) with open arms, and we snuck into a lane off to the side. The practice consisted of 106 X 100s on 2:00. While this may seem like a pretty leisurely interval, I found that 440 push offs take their toll on the calves (age does creep up on you). I knew this was coming, but I still like to imagine that since I SWIM with the kids, I am one. NOT TRUE!

From what I can remember, my calves were pretty shot somewhere in the 70s, but it was good to see others in the surrounding lanes ALSO swimming with toes flexed, trying to stretch their calves WHILE swimming. While this probably isn’t the most efficient way to swim, I certainly had no plans on stopping. These guys would NEVER let me live it down. So I just pretended to be drilling, and kept slurping down any Gatorade that happened to be nearby.

Within the set of 100s, there were lane responsibilities. Each set of 10 would bring the “passing of the counting board” — the ceremonial kickboard that signified it was YOUR lane’s responsibility to KEEP THE COUNT…and you’d BETTER come up with something FUNNY associated WITH that number, or you’d hear about it from the others (I know this from personal experience). Bill waited until number 80 to remind me that was the year I DIDN’T go to the Olympics. By that point he could have said Glenn LOOKS 80, and it would have been true.

Another “rule” is that you are supposed to pipe up when the count reaches your birth year. This seemed fun, until we got to the 90s and my swimmers were just starting to chime in. And when they did, they still seemed so chipper. Darn kids.

All in all, it was a great time, and I was glad to be part of it. I know my swimmers had fun (though they’ll never admit it), and continued to swim fast until the final couple of 100s.

Swimming is about making great friends, and experiencing things like this. While way too many kids look at practices like this as a bad thing, look at the people around you, and appreciate the experience you’re all sharing together. I know I appreciated it SO much, I don’t have to do it for another few years. 🙂