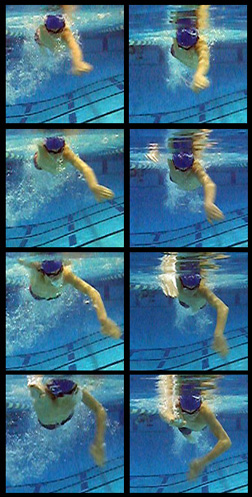 When young swimmers swim freestyle, they have a tendency to work harder rather than smarter. The focused, hard working, dedicated, and really excited swimmer tries to feel a connection with the water at all times. That swimmer searches for POWER, and FORCE as he or she pulls their arm through the water on freestyle.

But here’s the catch (so to speak): If you feel POWER or FORCE during the initiation of the freestyle pull, it usually means you’re using TOO much of a straight-arm pull. It’s difficult to get your arm through the water because the arm is in such a WEAK position.

The REALLY lazy swimmer will initiate a bend in the arm MUCH earlier. This makes it easier to pull the arm through the water because the arm is in a more powerful position. While this feels like you’ve given away power, in reality you have finally begun to find the balance between power, efficiency, and injury prevention.

While you still have to make sure you don’t collapse in on the stroke, I personally, would MUCH rather see a swimmer who is a bit too narrow on the catch and pull, than see a swimmer who uses a straight arm pull, which causes SO much strain on the shoulders and can lead to injury.

Here’s the good news for the lazy swimmer. While proper technique may not feel right in the short term, it usually makes things a LOT easier in the LONG term. I know that focus and trying to change technique ISN’T the trait of a lazy swimmer…the TRULY lazy will see the long-term ease that this can create, and start to think about it right away.